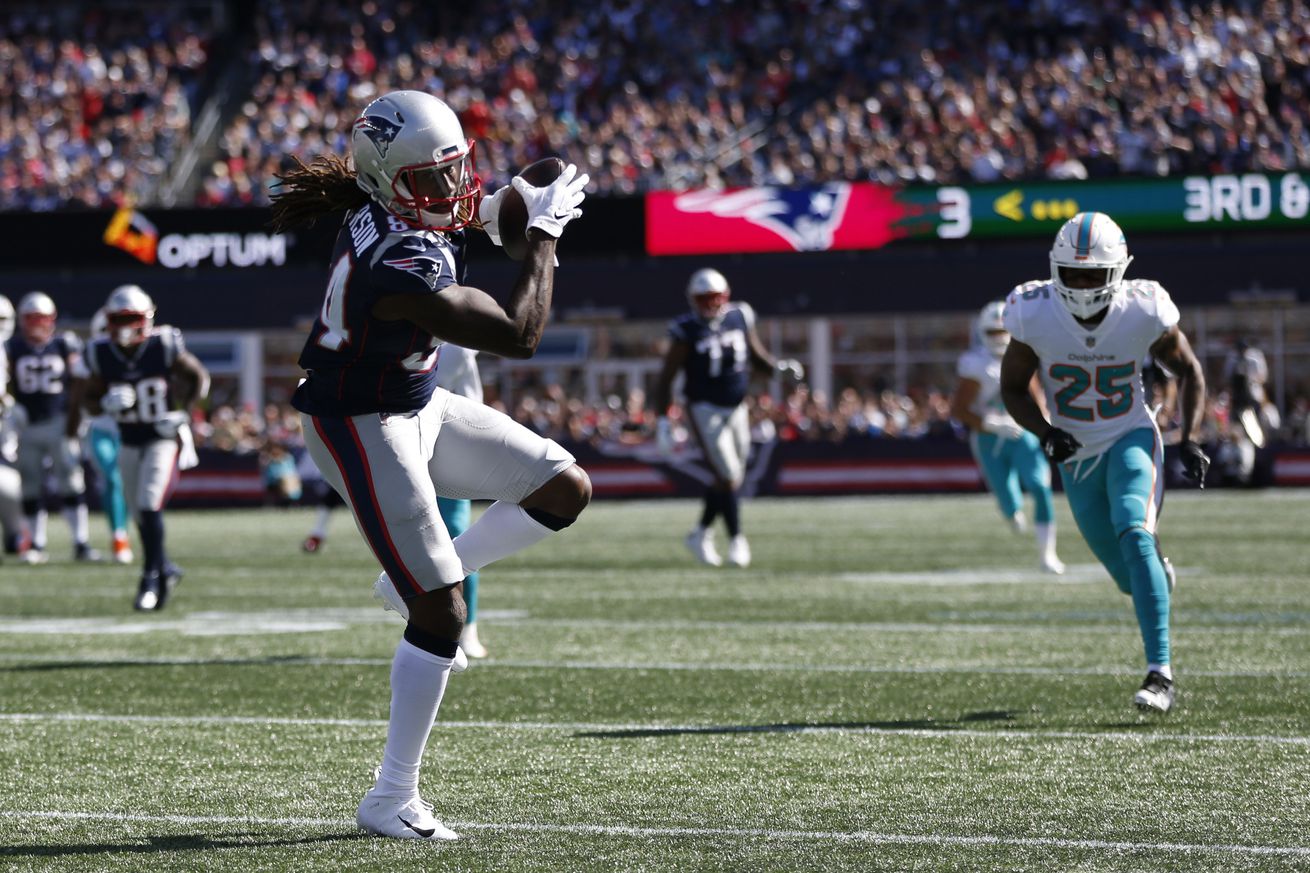 Our offseason countdown continues with the Number 12 Most Memorable Patriots Moment of 2018.

This offseason is just flying by.

We’re getting ready to head into the deadest time on the NFL calendar, so time to crank out this countdown of the Top 20 Most Memorable Moments of 2018 so I can spend most of August slacking off at the beach.

20. Danny Etling gets half of the Giants fired with an 86 yard touchdown run.
19. The Patriots demolish the Jets at home to secure a playoff bye.
18. Julian Edelman bounces off a Bill and into the end zone on a 4th down conversion.
17. Some punt team acrobatics keep the Steelers from getting a touchback.
16. Gronk magic returns with a 34 yard touchdown seam route catch against the New York Jets.
15. James Develin finds the end zone twice against the Minnesota Vikings.
14. The New England Patriots trade for Josh Gordon.
13. A Julian Edelman screen pass and an epic Tom Brady fakeout secures a primetime win on Sunday Night Football over the Green Bay Packers.

At Number 12, we head back towards the beginning of the season, some very unusual feelings, and a huge sigh of relief.

12. The Patriots right the ship with a Week 4 blowout of the Miami Dolphins.

The Patriots rarely lose games. Even more rare are back-to-back losses. However, that’s just what happened early on in the 2018 season, when New England followed an opening day win over the Texans with lackluster performances against the Lions and Jaguars to drop to 1-2 on the year. Of course, whenever the Patriots even slow the slightest chink in their armor, the bull-rush to declare the franchise dead in the water is swifter and more violent than the madness that takes place in Spain every year. 2018 was no different; not only had the Patriots lost twice in a row, but they looked completely out of sync on offense. Their defense couldn’t generate stops. They were giving up big plays. Passes were getting dropped. Brady and Belichick hated each other. “Yeah I know I’ve said that this team was done in the past, but this time I mean it!” was on every airwave coast to coast.

Even the fans weren’t immune to the hoopla. You’d figure we’d be used to the negativity by now, but the stark reality was that the Patriots didn’t look even remotely good over the past two weeks, so perhaps the cause for concern was legitimate this time. Of course, there were still plenty of fans who weren’t concerned, that knew the Pats were going to win the AFC East and make a deep playoff run, but there were just as many with their fingers hovering precariously close to the Panic Button.

Cut to September 30th, Week 4, as the Miami Dolphins came to town. Miami had yet to lose a game in 2018 and had scored at least 20 points in all three of their contests. New England had only mustered 10 the week before against Detroit, and there were more than a few experts picking Miami to take this game and a commanding lead in the AFC East.

And things didn’t start well for the Patriots; the very first play of the game was a 22 yard strike to Kenny Stills to put the Dolphins right at midfield. For the fans in attendance (including yours truly), it was the absolute last thing you wanted to see.

However, that 22 yard pass would represent the longest offensive play the Fins would have for the entire game. They would punt to New England, and the Patriots would go on to score on four of their six first half possessions. Tommy B hit Cordarrelle Patterson for a 55 yard catch and score. James White would need all of one play, a 22 yard scamper, to turn a huge Kyle Van Noy fumble recovery into a TD. Phillip Dorsett would make an acrobatic catch as he somersaulted mid-air in the end zone. The Patriots were up 24-0 at halftime, and Miami had run all of 19 offensive plays.

New England added two more scores in the 2nd half to make it 38-0 at the start of the third quarter. Miami would get on the board, finally, with just over two minutes left in the game, when Brock Osweiler hit Frank Gore for a six yard score to erase the shutout, but otherwise it was a beatdown of epic proportions. Tom Brady threw for 274 yards and 3 TDs. Rookie Sony Michel would rack up 112 yards and a score as the Patriots rushed for 175 yards on the ground. Eight different players caught passes. New signing Josh Gordon had two grabs, one of which was a 19 yarder that saw him shake off two defenders and the other of which was a 3rd down conversion hands catch in traffic. The defense force a pick, two sacks, and a fumble. It was hands down the most dominant Patriots win of 2018, and it couldn’t have come at a better time. With everyone down in the dumps and in need of a pick-me-up, the Patriots reminded everyone who still owns this division.

Initially, I debated putting a few moments alone on this countdown – the Patterson score, the Dorsett flip TD, and Michel’s breakout day – but ultimately decided to lump this whole game together. As great as those moments were, it was really more the vibe that this victory gave off – a huge sigh of relief and a reminder that the Patriots will always be fine as long as they have Brady and Belichick. As short as the NFL season is, it’s also pretty long as well, and jumping to conclusions too early usually doesn’t end well when it comes to writing this team off. The Miami game was a game we all needed, so it’s going in here at Number 12.