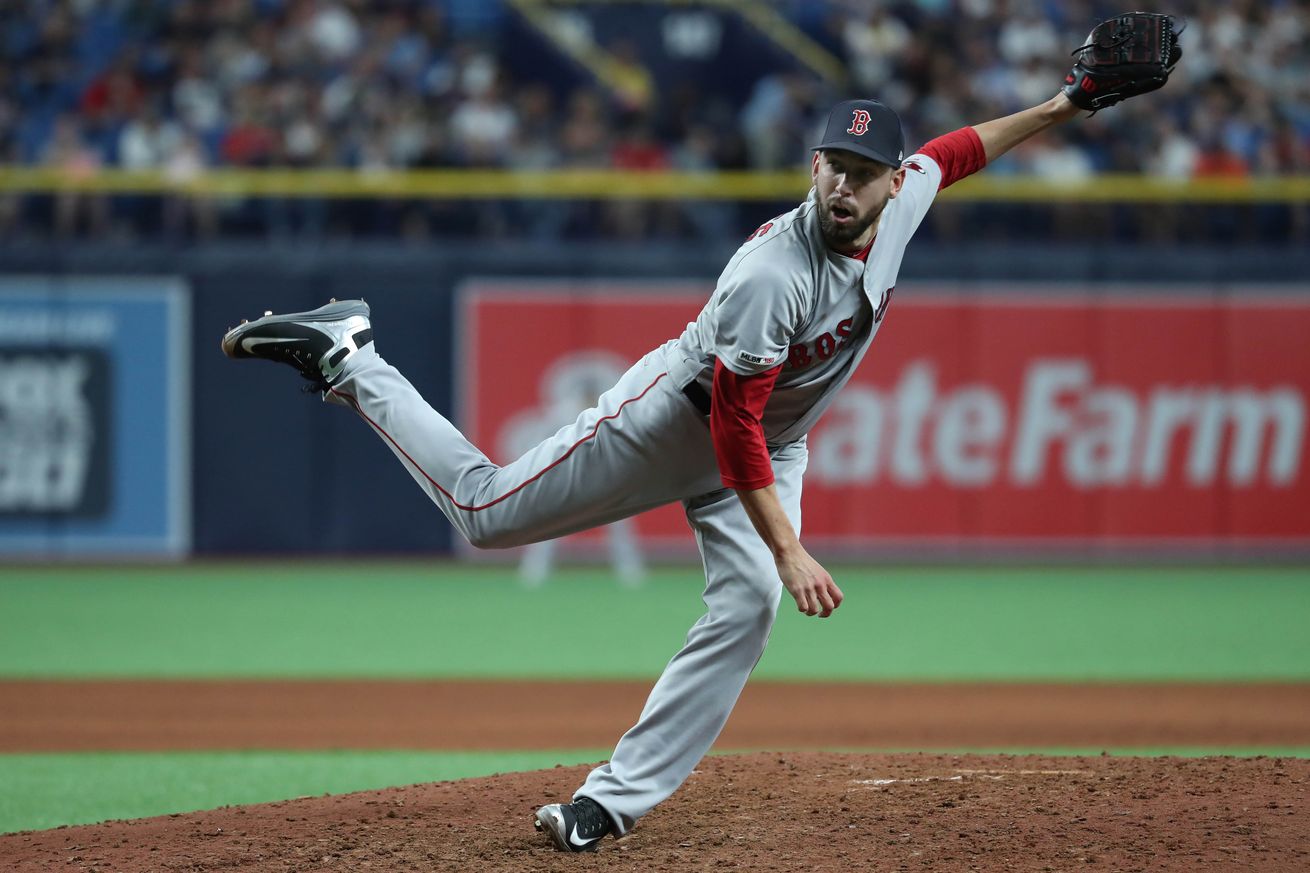 Coming into the reason, the Red Sox bullpen was supposed to be the downfall of this roster if such a thing existed. In all of the scenarios in which Boston failed to live up to expectations, the majority of them included the bullpen blowing a whole lot of should-be wins. Instead, they’ve been perhaps the strongest and most consistent unit on the roster. Granted, we’ve seen cracks lately and some of the reasons people were so worried before the year, but overall they’ve been fantastic. They are in the top ten in all of baseball in both ERA and FIP as of this writing. Now, they have leaned extremely heavily on the top guys, which probably isn’t sustainable, but for now it’s working. Guys like Marcus Walden and Brandon Workman, who have broken out in 2019, have received most of the headlines and for good reason. It’s the top guy who is the real reason this bullpen has been able to succeed to the extent that it has, though.

Matt Barnes has been, in a word, bananas this year. This is the way he’s been trending for his entire career, though, and even before he threw a pitch in 2019 he was one of the more underrated relievers in the game. That’s not just speaking nationally, either, because non-closers are always easily underrated by the national media. Even locally, however, there were many fans and media members who were not ready to give Barnes his due, despite consistently strong performance. Since 2016 when the righty converted to a relief role on a full-time basis, he’s steadily improved with each passing season. That’s culminated in this 2019 season when he’s completed his transformation into an elite reliever in this league.

That may seem hyperbolic, but consider what he’s done this year after what he did in 2018. So far this season in 18 appearances and 19 innings, Barnes has pitched to a 1.42 ERA, a 1.56 FIP and a 1.83 DRA. Among the 409 pitchers with at least 10 innings under their belt so far this year, Barnes is the only player who has been more than 60 percent better than league-average in all three of those categories after adjusting for park factors. Obviously that’s a small size, but then look at 2018. Last year, Barnes threw 61 2⁄3 innings and finished with 18 percent better than league-average by ERA, 35 percent better by FIP and 51 percent better by DRA. By DRA in particular, he’s been one of the five or so best pitchers in all of baseball since the start of last season.

More than anything, it’s his swing and miss stuff that makes Barnes so effective. This season, he is striking out just about half of the batters he’s faced this year. Among the aforementioned 409 pitchers, only two have struck out opponents at a higher rate and neither of them have a walk rate as low as Barnes’ 5.6 percent rate. With a more curveball-heavy approach than ever before — along with a high-90s fastball that is damn good in its own right — he has induced whiffs on over 40 percent of swings this season (per Baseball Prospectus), which is the ninth highest rate in baseball among the 326 pitchers with at least 250 pitches this season. Perhaps most impressively, he’s getting the most swings he’s ever gotten since converting to relief despite hitting the zone at a lower rate than ever before. Again, it all comes back to that curveball.

It’s not even just the fact that he’s been incredible that is why he’s so important, either. It certainly helps, but given the relative lack of talent in this bullpen (on paper, at least) it’s the way Barnes has been used that has been the real key. Obviously, Alex Cora gets a lot of credit here for being willing to use his best reliever in a flexible role. More than that, though, it’s been Barnes who should be commended for not insisting on saves. Considering the money he’s leaving on the table since arbitration is still set in 1996, it would be hard to be too mad if he did insist on pitching in a more traditional role. Instead, he’s been more than willing to pitch whenever called upon. In this case, that has meant he’s been willing to pitch any of the final three innings when the best portion of the opponents’ lineup is coming up.

Looking now at the 238 relievers with at least 10 innings pitched this year, Barnes has entered games with an average leverage index (which measures how important the upcoming at bat is in the context of the game) of 1.85. For context on how high that is, only nine relievers have a higher average leverage index in baseball. This has been huge for the rest of the bullpen, because while they may be getting the more high-profile ninth inning on many occasions they are doing so after Barnes has handled the toughest hitters. Workman and Walden, among others, have undoubtedly impressed this year. This is not to take anything away from them. If they were forced to face the middle of the lineup more than they have in 2019, though, it’s safe to assume their numbers wouldn’t be quite as impressive. They can thank Barnes for that.

The Red Sox still ultimately, at least in this writer’s opinion, appear to be at least one relief arm away. For now, though, they’ve been able to make it to this point of the year with the bullpen they headed into the season with. Even better, they’ve done it with solid success. There have been some guys stepping up and performing beyond preseason expectations, but it’s been the unit’s best pitcher who has truly carried the group. Bullpens are a group and it’s hard for one individual to truly ascend beyond the group as a whole. Barnes is coming close to doing that, though, and as he continued to approach elite status he is carrying this bullpen in the most important moments.

Over The Monster https://www.overthemonster.com/2019/5/21/18633796/matt-barnes-role-usage-red-sox-bullpen-walden-workman
Categories: Sports