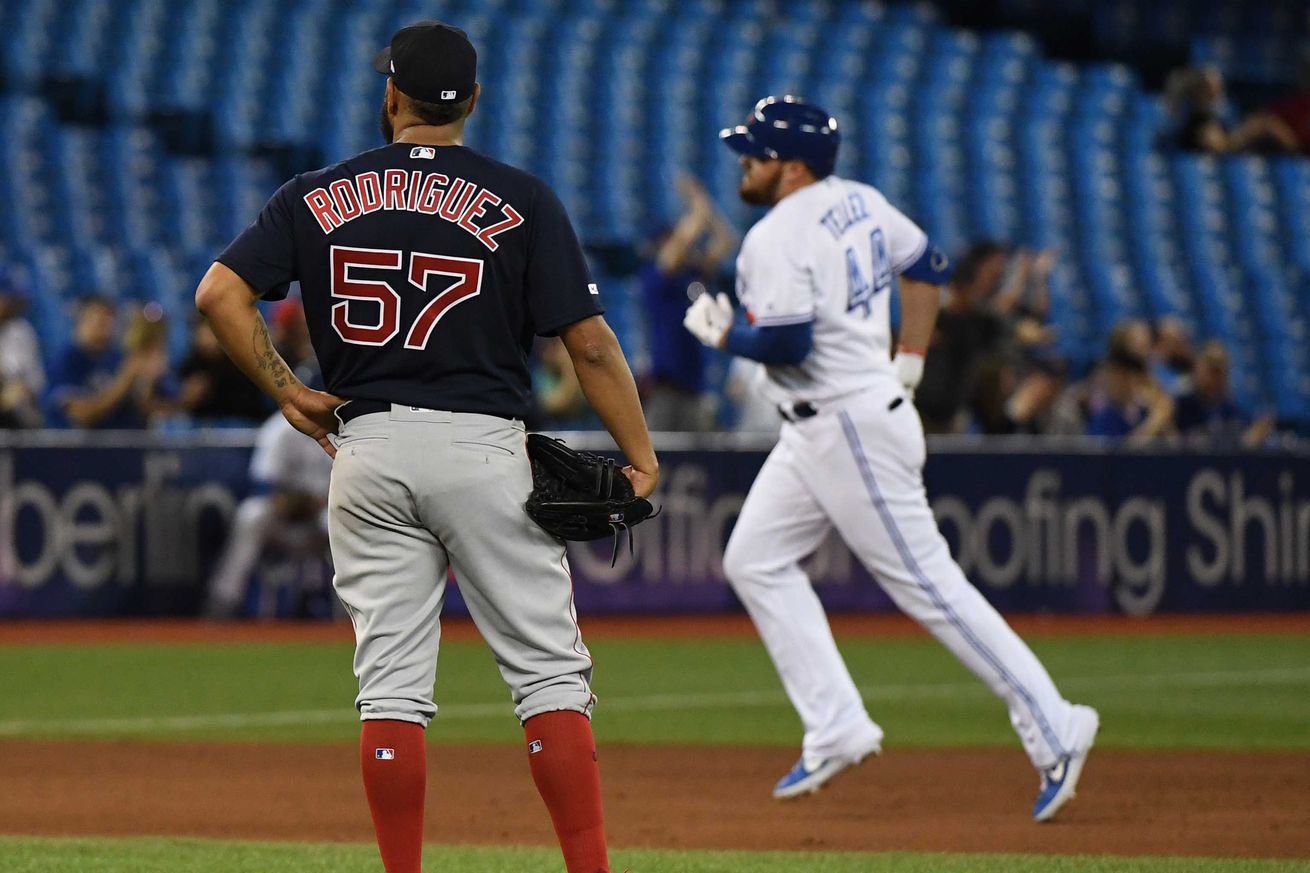 Well, that was ugly. Tuesday’s game up in Toronto was pretty much the opposite of the series opener on Monday afternoon. After a solid first few innings from Eduardo Rodriguez, the lefty fell off completely in the fourth thanks to two big homers. He’d allow one more big fly in the fifth and that gave the Blue Jays a commanding lead. The offense, meanwhile, got on base plenty against Marcus Stroman and Toronto’s pitching staff but fell back into the all too familiar trap of not producing once they got the runners on base. It was not a fun baseball game.

When the Red Sox dropped two of three to the Astros this past weekend, the biggest reason was that Houston is really freaking good. Besides that, though, Boston also did a horrible job of situational hitting, leaving a bevy of runners on base in each of the two losses. They snapped out of that funk on Monday with a 12-run bonanza that included four home runs, and the hope was that this success would carry over into the second game of the series in Toronto on Tuesday.

Unfortunately, Marcus Stroman had some other ideas and Boston went right back to being frustrating. The Blue Jays ace isn’t exactly the most overpowering pitcher in the game, getting solid but unspectacular strikeout rates. Instead, he keeps everything down in the zone (or often below it as well) with movement and is very hard to square up. So, if you’re going to beat him you need to find some holes with runners on base. The Red Sox got the runners on base, but finding holes in big situations was the bigger issue.

After the top of the order went down 1-2-3 in the first, they came back in the second and had their first big chance. Xander Bogaerts led off that frame by drawing a walk before Rafael Devers smoked a line drive into center field to put the two leadoff men on. That brought Michael Chavis to the plate, but the rookie couldn’t come through. Instead, he grounded into a double play. With the runner on third base, Christian Vázquez tapped a ball back out towards the mound and the inning ended without a run crossing the plate.

The Red Sox would get right back to work in the third, though, with Steve Pearce drawing a one-out walk that was followed by a single and a walk to load the bases for Mitch Moreland with just one out. The lefty has had a ton of big hits this season, but this time he struck out swinging before Bogaerts did the same and yet another chance was squandered. Stroman was fired up after that second strikeout, too, and he let the Red Sox dugout know about it. Boston’s players didn’t really appreciate that.

They wouldn’t make him pay for his celebration any time soon after, though, sending just three more to the plate in the fourth thanks to yet another double play. In the fifth, they got a single but nothing else.

Meanwhile, Eduardo Rodriguez was looking to build off some recent success going up against a Blue Jays lineup that had much more punch than the one they featured on Monday. Fortunately, he looked good early on and was matching Stroman for the first few innings. The Red Sox lefty allowed a single in the first that was quickly cancelled out by a double play. He came back with a 1-2-3 second before allowing just a walk in the third.

When the fourth rolled around, the score was still 0-0 but Rodriguez hit a rough path from which he could not escape. That rally started with a bloop single from rookie phenom Vladimir Guerrero Jr. After that, Rodriguez started leaning very heavily on his changeup and the Blue Jays hitters were ready for it. With one out, Rowdy Tellez got a changeup down and in off the plate, but he was sitting on the offspeed pitch. He launched it way out to right field to give Toronto a 2-0 lead. Randall Grichuk came up next and he got a changeup at the bottom of the zone that he hit out over the left field wall to give Toronto a 3-0 lead on back-to-back homers. Alex Cora then came out for a rare non-pitching-change mound visit — particularly significant here considering how the manager has publicly criticized Rodriguez in the past — and Rodriguez settled down for the final two outs of the inning after that.

Things didn’t get much better in the fifth. After two quick outs to start things off, Guerrero started another rally with another base hit. Just Smoak then drew a walk before both runners move up a base on a wild pitch. It wouldn’t matter where the runners were standing, though, because Tellez did the thing again. This time it was a slider to the big first baseman, and this time it was a total missed location. Rodriguez wanted to get it away from the big lefty, but instead he left one belt-high over the inner-half. Tellez launched another one, and just like that it was a 6-0 lead for the Blue Jays.

So, now the Red Sox had to get to work at the plate and make up for their missed chances early on. Mitch Moreland led off the sixth and did his part, launching his 13th homer of the year on sinker left middle-in. They had a chance for even more when Devers and Chavis drew back-to-back walks, but Vázquez ended that threat with Boston’s third double play of the night.

At this point, Boston went from having a fighter’s chance to pretty much having it end. Tyler Thornburg, who is still on this roster for reasons that are not at all clear to me, came on for the sixth as Cora turned to his bullpen for the first time in this game. The righty was smoked, allowing two runs on a pair of walks and a pair of hits. By the time he was done, it was an 8-1 lead for Toronto.

Colten Brewer then came on for the seventh and allowed two more runs to push the deficit up to nine. The righty came back in the eighth for a clean, 1-2-3 inning.

Meanwhile, the lineup once again stranded the bases loaded in the seventh when it was still 8-1. The offense would pick up two more runs in the eighth on solo homers from Devers and Jackie Bradley Jr., the second in as many days for both.

The Red Sox will look to get back on track with the third game of this four-game set on Wednesday. They’ll be sending Rick Porcello to the mound to take on Aaron Sanchez, with first pitch scheduled for 7:07 PM ET.

Over The Monster https://www.overthemonster.com/2019/5/21/18634949/red-sox-blue-jays-eduardo-rodriguez-rowdy-tellez-marcus-stroman
Categories: Sports