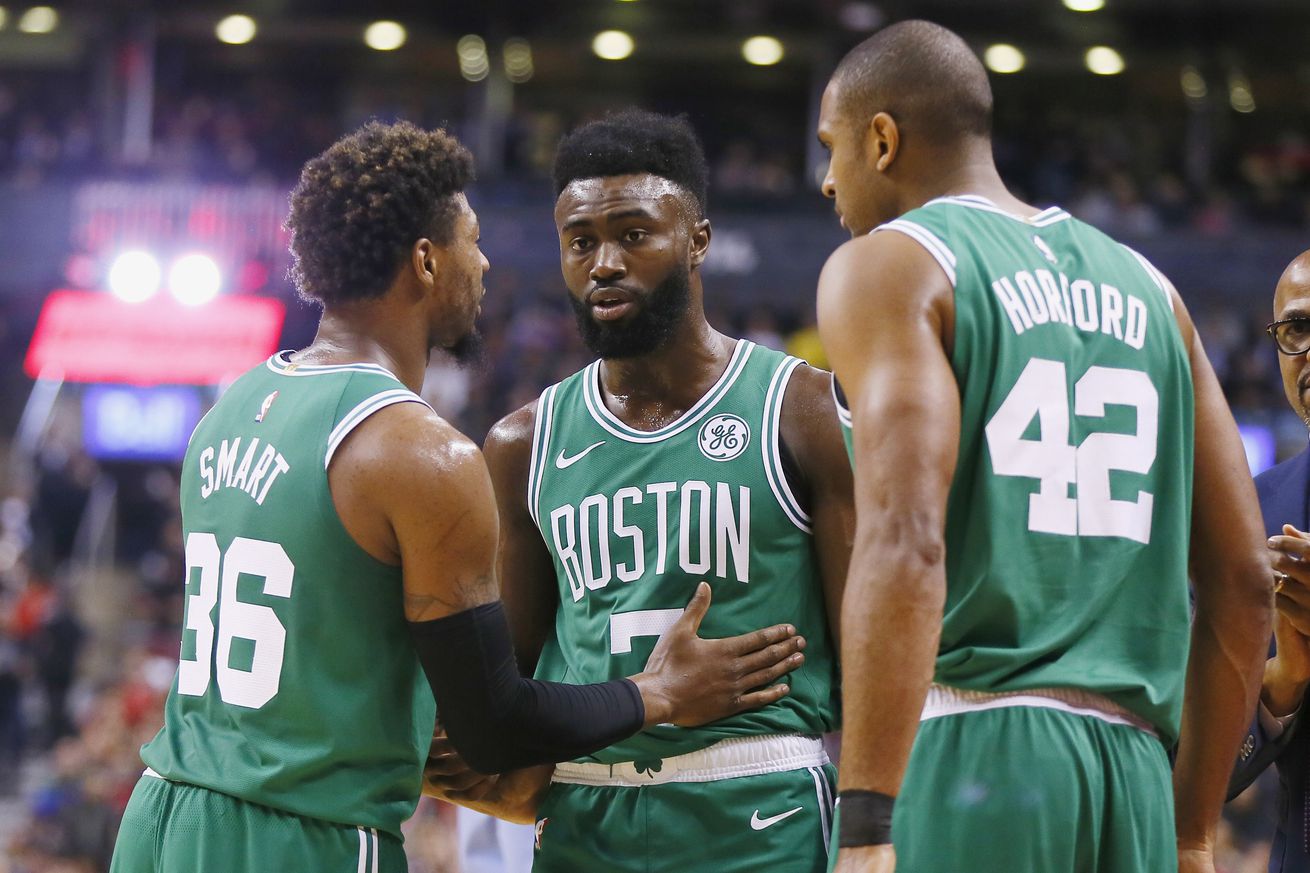 Marcus Smart and the Jays are still trending in the right direction.

In what many will view as a lost season, the Boston Celtics’ young core took meaningful strides forward that deserve recognition. None of the young core of Jaylen Brown, Jayson Tatum, and Marcus Smart have made “the leap” that people often expect high lottery picks to make, but that shouldn’t cause any panic over the team’s future. While the current roster is a little dysfunctional, my faith in the team’s direction is unwavering and my thoughts on the youth movement is unchanged. Let them grow together.

Opportunity or the perceived lack thereof

The idea that Kyrie Irving and Gordon Hayward returning would stunt the growth of young players never felt right to me. Progress and player involvement shouldn’t be exclusively measured by shot attempts, and regardless of what metrics you use, the idea that opportunity was taken away from players who deserve more of it is mostly false.

Yes, there was a portion of the season where Brown’s minutes were unjustifiably short. Yes, I remember games where Tatum was frozen out of the offense late in games after double-digit first half scoring. Here’s an idea, though: increased usage isn’t the answer to every player development equation. Also, consider the fact that the Eastern Conference was much stronger this year and using only last year’s conference finals run to evaluate our players is probably obscuring our view of the present day.

Tatum’s usage bumped up to 22.1% from 19.5% in his first season. Brown’s was nudged up to 22.1% as well, up from 21.4% last year. Tatum played one more minute on average, Brown played five less. The idea that either one was going to take a monumental leap between last year and this one is – to put it lightly – arbitrary. Likewise, the idea that either of them regressed or stagnated this season seems ill informed. In fact, there’s strong evidence Brown improved as a player given his steady ascension after being moved to a bench unit that included a certain point guard who didn’t like his teammates. Via NBA.com/Stats, here’s Brown’s numbers for each month:

And if that’s not enough for you, here’s a wonderful interview from Brown’s mid-season appearance on The Jump:

And finally, from Jackie MacMullan’s piece on him in December:

You can frame it in any way you want. I look at overcoming adversity as improvement. There might also be a link to lessening responsibility and better play, so let’s talk about it.

Marcus Smart, who plays the same position as Kyrie Irving, had a career year. Where’s the “stunted development” narrative with him? Am I supposed to believe that our small forwards lost more opportunity to his return than our other guards, because I’m not buying it. Smart started 60 games this year after starting 83 games in his first four seasons combined. He played less minutes and took less shots than last season, and had his usage rate drop from 19.4 to 14.6. He shot less times per game as a starter this season (7.7) on average than as a bench player (who starter occasionally) in his previous two seasons (9.5 in both). His efficiency skyrocketed. He’s going to make an All-Defensive team. This isn’t to draw a direct line from the loosely-defined idea of “opportunity” to player growth, but to show why I think the current narrative about player regression isn’t based in reality.

Even with Hayward taking the whole season to find his way back, the Celtics spent games looking for somebody – anybody at all – to get some buckets off the bench or as a secondary scorer next to Irving. Once Marcus Morris cooled off, it was rare to find a hot hand anywhere else. So what held the team back more: the lack of opportunity, or not taking advantage of the ones that were given? I’d say it’s the latter, and not because I want to point blame at young guys for missing shots. The idea that Kyrie derailed everything is what I take issue with.

I totally understand that his public comments added an extra layer of nonsense to a team fighting more adversity than they could handle, but the mob mentality that has people wanting to chase him out of town is getting out of hand. And it’s the same type of mob mentality that points at the mistakes of our young players and paints a false narrative that they mysteriously all got worse over night.

If you’re unable to forgive Kyrie, at least answer this for me: did you hate Paul Pierce before 2008? Did you think his worst moments warranted a trade?

I could have also titled this section, “I didn’t want this whole piece to come off as negative.”

This play made me emotional:

If we lose one or both of the Jays to an Anthony Davis trade, I’m going to spend a lot of late nights watching highlights like these thinking about what could have been. To have a 21 and 22 year old than can run a break like that at the end of a close playoff game is monumental.

Jaylen Brown, who reinvented himself mid-season to employ a far more aggressive approach to scoring, gave up the shot to throw the best pass of his career. Jayson Tatum, who took a minimum of three years off my life by pump-faking his way out of open shots, knocked down the most important bucket of the season without hesitation.

Gushing aside, this is how I look at player progress and I would encourage you to do the same. Not that it’s my place to tell anybody how to live, but I’m feeling a little bitter these days about watching our best get run out of town in real time because of lazy narratives painting them as villains. (Am I writing about young players or Kyrie? I don’t know anymore.)

The collective disappointment in this roster is justified, but only because our high hopes were also justified. The Celtics’ youth movement is in an acceptable place. I’ll concede whatever opinions you may have on how Kyrie handles the media, but he’s not actively making the team worse on the court. The stage is still set for the Celtics to thrive in the East with a healthy mix of young talent and Al Horford’s veteran experience. Or, a trade blows everything up and then we roll with that* (*Try not to cry. Then, cry a lot). Either way, we should give the young guys credit for what they did when confronted with unexpected adversity.