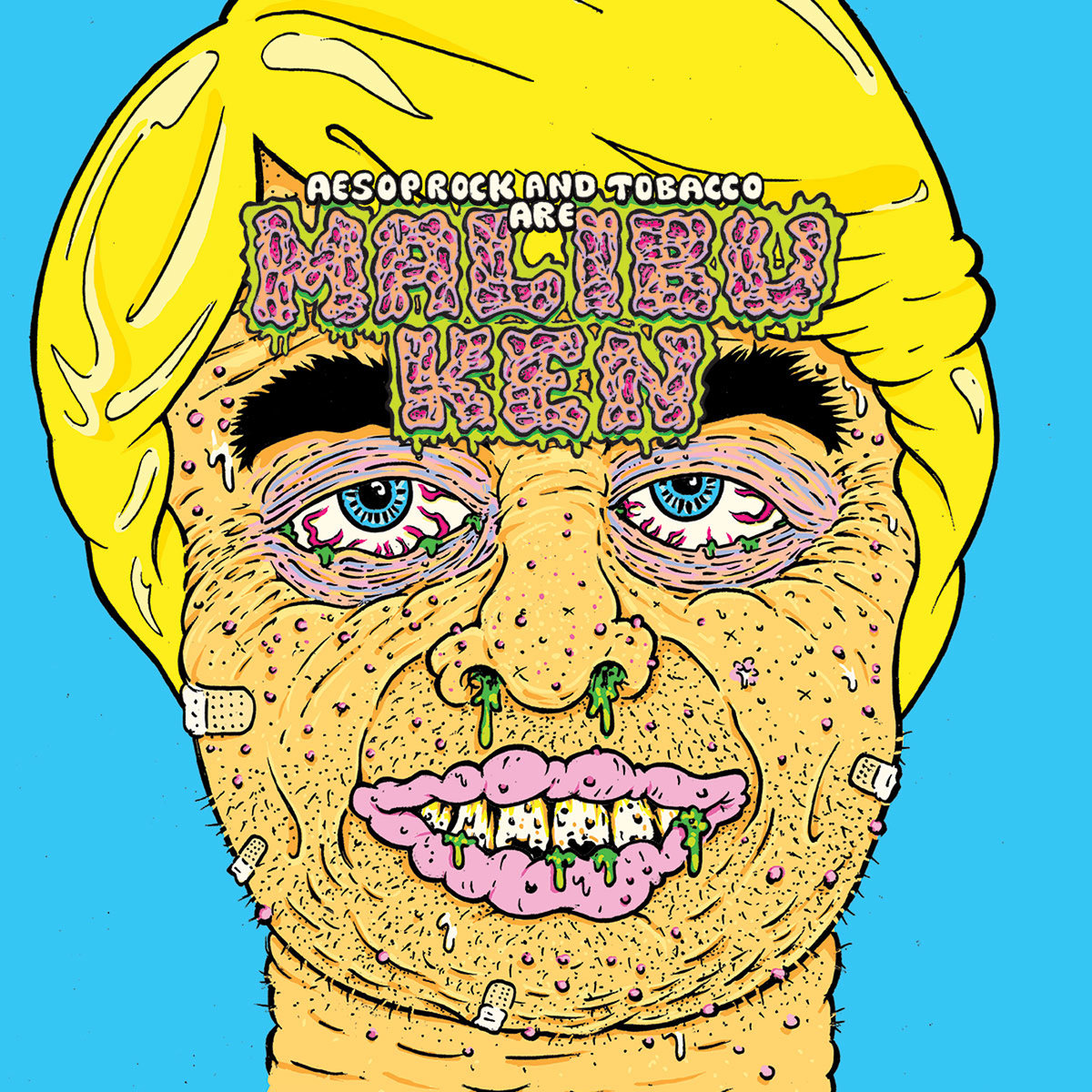 ‘Malibu Ken’ is the whacky and highly entertaining self-titled debut album from the unlikely duo of Aesop Rock and TOBACCO. Aesop Rock is a Portland underground rap veteran who was once determined to have “the largest vocabulary in hip hop” while TOBACCO is a producer best known for his work with the Pittsburgh based experimental electronic outfit Black Moth Super Rainbow. While the two have little in common genre-wise, they share a knack for the strange and experimental.

This isn’t the first time the two have collaborated — Aesop Rock showed up on TOBACCO’s 2008 album ‘Fucked Up Friends’, but still, ‘Malibu Ken’ is a sharp left turn from Aesop Rock’s old-school underground sound. Instead of the record scratching and live drums samples that have dominated Rock’s previous work, TOBACCO sticks to his signature sound, defined by lively, breathing synths blended seamlessly with vocoder effected vocals.

The instrumentals alone barely sound like hip hop, but Aesop Rock has no problem making them his own. He brings his familiar growling delivery, and dense, wordy style to each song. As usual, hooks are definitely not Rock’s main focus. He might use a memorable line as a refrain on tracks like Sword Box — ”For my next trick I’ll make a dollar climb up out your wallet, disappear, and reappear inside my pocket” — but the closest thing to a true hook on the album either comes from TOBACCO’s breathy, vocoder laden vocals on tracks like “Tuesday” or Rock’s simple “Or I don’t know” refrain on “Churro.”

Lyrically, Aesop Rock is devilish and truly weird. The opening song “Corn Maze” introduces the alter-ego, Malibu Ken with the line “Every day I wake up in a gallon of sweat/puke blood, hit the shower, turn to Malibu Ken.” While Malibu Ken doesn’t come off anywhere near trustworthy, he’s not quite an MF Doom-style supervilliam. Rather, he is more of a cunning gremlin who lives in a world that exists partially in his own head. A world that’s stranger—and grosser—than what the people around him can understand. “My neighbor found a mushroom growing inside of my car/She called me up on tour, sounding emotionally scarred/Although it may have scared her more that I wasn’t really alarmed,” he raps on “Tuesday.”

Of course, to Ken this is “just another Tuesday.”

TOBACCO’s instrumentals work perfectly as accompaniment for Rock’s deranged lyrics. With a relatively limited sonic pallet, TOBACCO is able to keep the beats engaging from front to back. There are no stand-out beats, just consistently creative synth and vocal lines that wriggle and breath as much as the mushroom growing in Malibu Ken’s car. The beats are just as dynamic and relentless as Rock’s delivery as well. Neither upstages the other, instead they work in tandem to keep up the album’s energy as well as its creepy aura.

One of the most surprising aspects of Malibu Ken is how little each artist had to change their sound in order to make a cohesive album. TOBACCO’s instrumentals are not far off from his best known work with Black Moth Super Rainbow and Aesop Rock sounds just as energized as he does over more traditional hip hop beats. ‘Malibu Ken’ shows just how versatile the sound of each artist already is by showing how well they can apply their sounds to different genres without compromising.

‘Malibu Ken’ isn’t a serious album. It’s dark and devilish, but quirky and humorous. Aesop Rock and TOBACCO are both in their wheelhouse and at peak creativity.