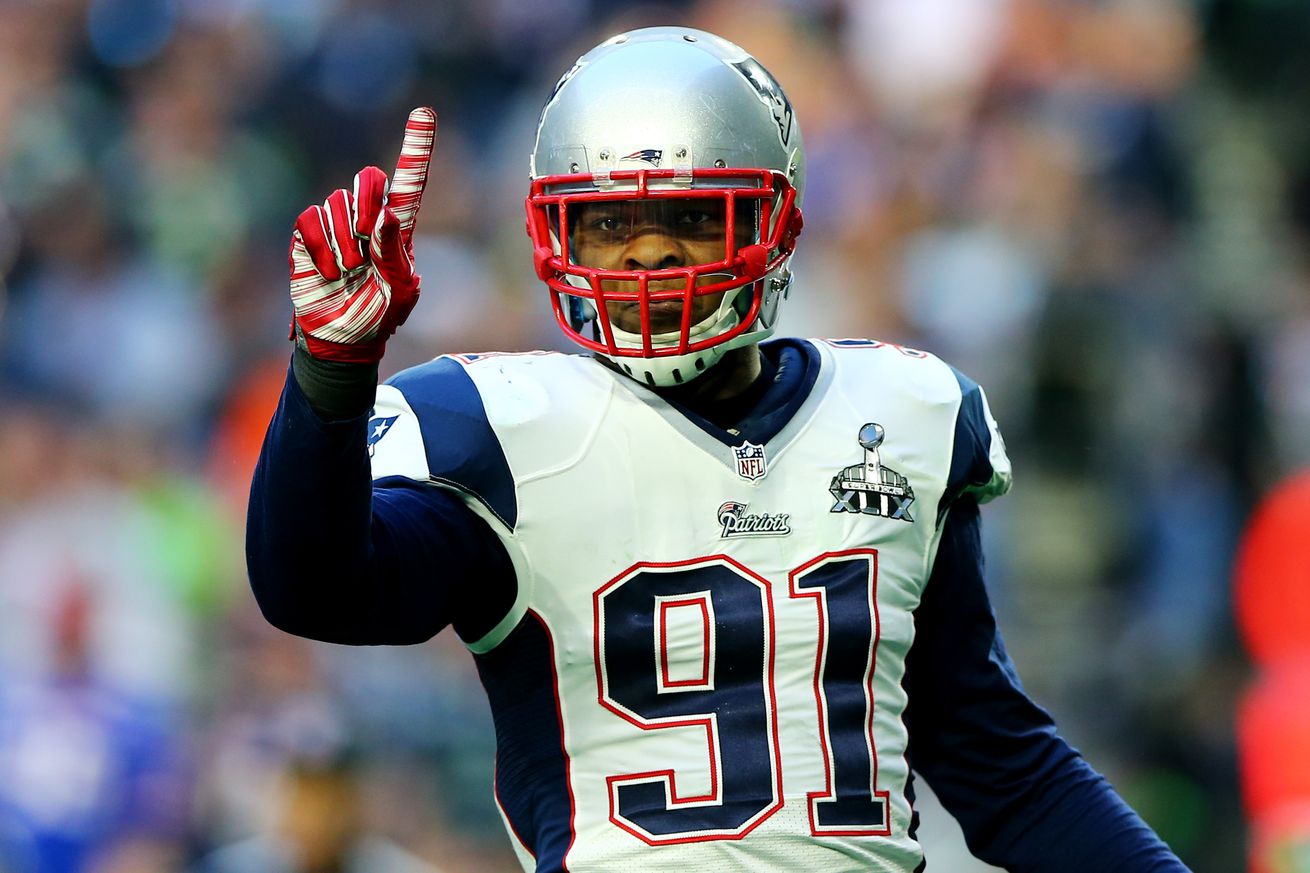 Related: Re-signing Jamie Collins is a gamble worth taking for the Patriots

The New England Patriots have been quite active since the NFL’s free agency compensation window was shut earlier this month. The team plugged numerous veteran players from the open market over the last three weeks, from now-retired offensive tackle Jared Veldheer to wide receiver Dontrelle Inman to tight end Benjamin Watson. The most intriguing of the men recently brought on board might be linebacker Jamie Collins, though.

Collins is, of course, a familiar face in New England: he started his career as a second-round draft pick by the team in 2013 and quickly developed into one of its core defenders. His tenure, however, came to a sudden end halfway through the 2016 season when the Patriots decided to trade Collins to the Cleveland Browns for a third-round draft choice. Two and a half years after the move, the 29-year-old is now back where his NFL career began.

The offseason addition is no lock to make the roster, though, and will have to carve out a role on the team. How good are his chances of doing that? Let’s take a look at the film from his tenure in Cleveland to find out what Collins still has left in the tank and could bring to the table in New England.

Cleveland swallowed a $2.5 million dead money hit in order to get rid of Collins, so the Browns obviously felt that the investment made in the linebacker was no longer financially feasible. A reason for that was likely his performance over the past two seasons: Collins was an inconsistent player in his new team’s system and failed to live up to the four-year, $50 million deal he signed half a year after being acquired.

That being said, he still showed the skills that made him one of the NFL’s most intriguing linebackers — at least in flashes. His outstanding athleticism, for example, was on display on a regular basis. Just take a look at the following play:

Great example of Collins’ range. Can easily run with the vast majority of TE’s,

Does an excellent job staying over the top of Hil and makes the open-field tackle. Collins will struggle when asked to change direction quickly, but it doesn’t get much better from the LB spot. pic.twitter.com/xu4Not8NKo

Originally aligning on the strong side of the formation as an off-the-ball middle linebacker, Collins (#51) does an excellent job on this play of staying on top of All-Pro wide receiver Tyreek Hill (#10) as he enters his zone — one of the toughest assignments for any defensive player, let alone a linebacker. Collins turns his hips fluidly and is able to quickly react to the in-cutting route run by the wideout. This in turn allows him to make the tackle and limit any potential yards after the reception.

Collins might have been miscast by the Browns as an on-the-ball outside linebacker when the team went to its nickel ‘diamond’ front, considering that he lacks the a wide array of counter moves as a rusher in the both the passing and the running game. When he was left unblocked or allowed to operate in space, however, he was still the same rangy player he was in his first tenure with the Patriots.

I think Collins was miscast as an on-ball OLB when the Browns went to their nickel “diamond” front, as he doesn’t have a plan or many moves as a rusher and is routinely swallowed by linemen in the run game. But when left unblocked or allowed to chase, he’s a heat-seeking missle pic.twitter.com/A6wBU6hdW2

Playing from a wide-9 alignment, Collins quickly reads his keys and identifies the hand-off based on the offensive line’s zone movements to the defensive left. In turn, the veteran locks in on ball carrier Austin Ekeler (#30) and is able to race across the formation to chase him down and tackle him. This play is therefore another good example for Collins’ still existing skills in the open field.

As is the case on the play above, Collins is at his best when he is kept clean or going against tight ends. He does have a habit of dropping his head and throwing his shoulders into blockers, but the results are usually positive when he is able to use his technique and applies the stack-and-shed to approach his matchup:

Against the run, Collins is at his best when kept clean or when taking on TE’s. Has a habit of dropping his head and throwing his shoulder at blockers, which creates a lot of boom-or-bust scenarios. But when he uses his hands to stack and shed, the results usually look like this. pic.twitter.com/UXRY3pQ7W8

Collins aligns off the ball, opposite tight end Virgil Green (#88) who immediately mirrors him after the snap. However, the defender is able to push the blocker back using excellent hand technique. As a result, he is able to disengage quickly to dive for the ball carrier’s legs to make the tackle. Not only does Collins display some sound technique and strength on this play, he also shows some excellent vision to bring Melvin Gordon (#28) down.

One way to get Collins to operate to his strengths and into space is by scheming him open. The Patriots were excellent at doing that — using concepts like the following:

Collins as a pass rusher is best when schemed free (think green dog or Belichick’s “rain” blitz from double A-gap blitz looks) or when left 1-on-1 with RBs in pass protection. These allow him to maximize his explosiveness and athleticism. Beautiful execution here on the T-E twist pic.twitter.com/QCaKlM2oye

After originally attacking left tackle Terron Armstead (#72) from a 7-technique spot, Collins cuts to the inside to stunt around 4i-technique down-lineman Myles Garrett (#95). Able to move freely and without a blocker engaging him, Collins quickly bursts through the offensive left-side A-gap to put pressure on New Orleans Saints passer Drew Brees (#9). Again, his quick movements and speed in the open field made the play and quarterback hit possible.

Of course, the Browns would not have parted ways with Collins two years into his deal if his play was justifying the financial investment in their eyes. And who can blame them? Despite leading the team in tackles in 2018, the veteran defender was too inconsistent a performer in numerous aspects — some of which problems that were created by his usage, others already on display when he was with the Patriots (who are better than any other team in the league at scheming around a player’s shortcomings).

A lot of the issues simply had to do with his technique, which at times got sloppy when he tried to take on blockers or tackle ball carriers:

Collins lacks the strength to bench OL, so when they come for him at the 2nd level, he’ll try to evade them by juking or dip his shoulder and duck underneath their blocks. Sometimes it works, others he takes himself out of the play. In position here, but doesn’t finish the tackle pic.twitter.com/Y0hzaS6wB5

Collins, playing as a strong-side off-the-ball linebacker, is in position to make a play here as he evades pull-blocking center Mike Pouncey (#53). In the process of doing so, however, he dipped his shoulders in an attempt to duck underneath Pouncey’s blocking attempt. As a result, he allowed running back Austin Ekeler (#30) to execute a cut towards the boundary and gain additional yards. Collins got himself in position to make a stop, but simply failed to execute due to a sloppy and inconsistent use of technique.

The same can be seen in coverage. While Collins can still get to his spots easily in zone concepts, he at times seems too focused on the quarterback which in turn hurts his ability to read what is going on around him:

Collins can still get to his spots easily in zone, but at times he seems too focused on the QB, which hurts his ability to read what’s going on around him.

When the w/s #2 stays shallow, Kelce is his only priority. Commits late and Kelce gets behind him. Saved by the rush. pic.twitter.com/QbAFTvMDaV

On this play, Kansas City Chiefs tight end Travis Kelce (#87) runs straight up the seam as Collins’ assignment. However, the middle linebacker shows some hesitance as he keeps looking into the backfield. This allows Kelce to run past him and get open in the deep portion of the field. Had the pass rush not successfully collapsed the pocket, league MVP Patrick Mahomes (#15) might have been able to hit his tight end for a score.

Collins’ processing speed in general has been a problem during his stint with the Browns. The following play from the team’s game against the Los Angeles Chargers is a good example of this:

Not a great look for Collins here. Way too late reading the end around. Saved by his athleticism and catches up to Allen late, but he’s gotta process more quickly pic.twitter.com/76yfC4sqoP

Collins originally aligns over the offensive right-side B-gap in an off-the-ball position, but immediately moves towards the pocket at the snap instead of reading his keys and properly reacting to the play. As a result, he misplays the end-around and is completely out of position once he realizes and turns around. While his athleticism allows him to catch up to Keenan Allen (#13), the play itself illustrates Collins’ hit-or-miss approach when it comes to reading plays — something that has been a problem in New England as well at times.

Those lapses in discipline are on display numerous times when looking at his tape, especially on misdirection plays:

Another discipline laps for Collins. Gotta stay wide as the edge defender, especially against a team like LA that loves end arounds and misdirection. Crashes too far inside which allows Green to pin him and frees the edge for Williams. pic.twitter.com/X4VDdjiJuR

Aligning as a 9-wide edge defender, Collins gets drawn too far inside immediately after the snap. The trickle-down effect created by this helps Mike Williams (#81) gain considerable yardage on yet another end around: with Collins out of position, Virgil Green (#88) is able to free up the edge by simply obstructing the defender’s path, which furthermore allows Williams to get to the outside and into open space.

All in all, Collins’ scouting report right now is about the same as it was when he was traded away by the Patriots in October 2016. His discipline, tackling, and ability to disengage from offensive linemen are still legitimate concerns. On the other hand, however, he still displays tremendous athleticism, speed and an ability to cover in space. If placed in the right situations and positions, Collins therefore still has the tools to be successful.

What will help in this regard is New England’s overall depth at the linebacker position. With Elandon Roberts and Ja’Whaun Bentley assuming early-down duties alongside the top duo at the position — Dont’a Hightower and Kyle Van Noy — Collins should be freed up to play primarily in passing situations. This could bring out the best in the veteran. After all, he can still cover most running backs and tight ends man-to-man, has great range to play in zone schemes, and will bring the heat if the scheme allows him to.

Ultimately, Collins is worth a shot. Not only is he a cheap option that knows the system, he also adds depth and upside to the linebacker group.