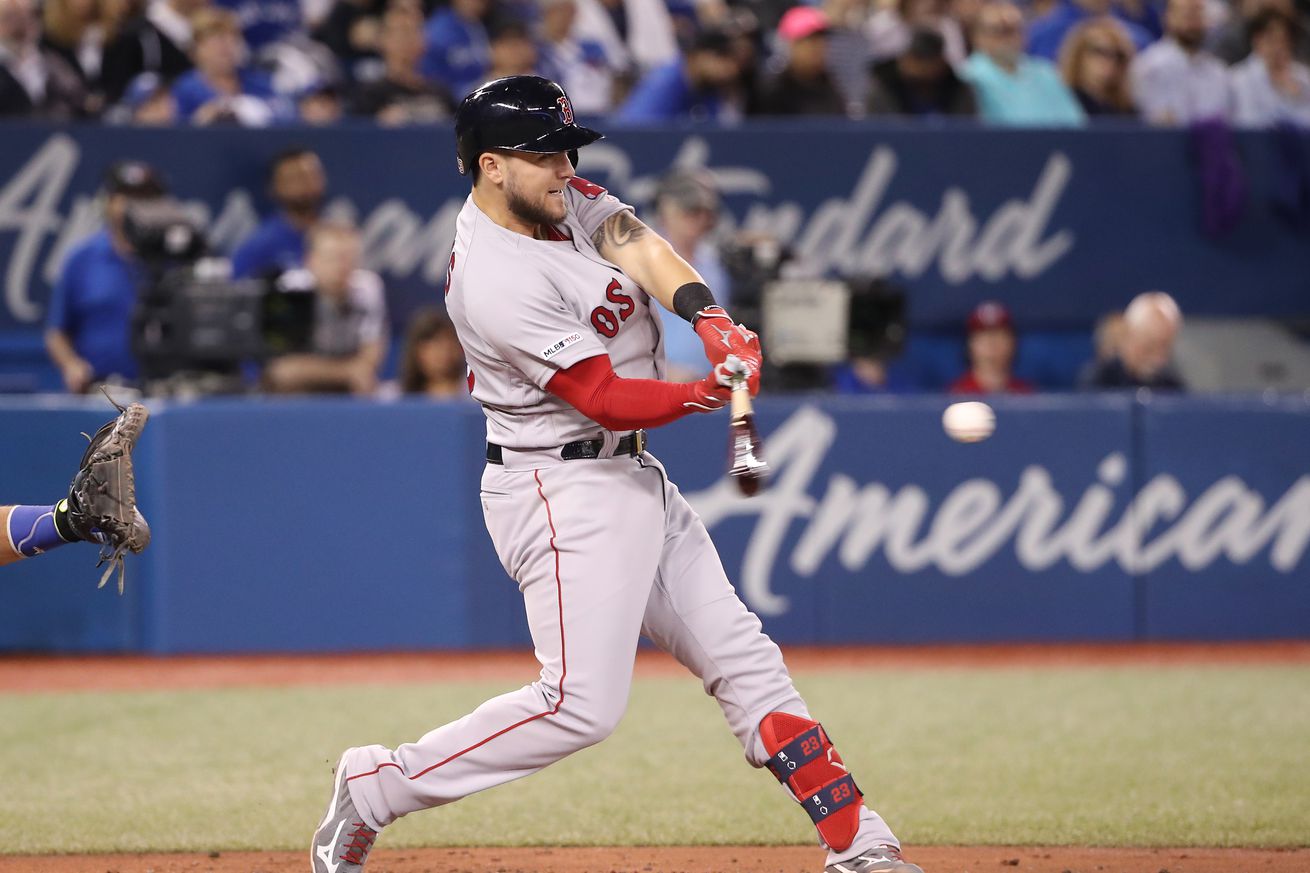 I’ve re-written this headline and sub-header about five times now and I’m done.

Well this was a wild one. The first two games of this series in Toronto were blowouts, with each team grabbing one win. This was a close affair, though, with the Red Sox having leads for most of the evening but never really getting to pull away. They did have some chances to expand on their leads, but couldn’t take advantage. Meanwhile, Rick Porcello was fantastic but was pulled after just six innings and 80 pitches, leaving it up to the bullpen. Brandon Workman, Matt Barnes and Marcus Walden have been mostly good this year, but each allowed a run to push the game to extras. Mookie Betts appeared to have hit the game-winner, but Heath Hembree allowed another run to extend the game another inning. That just gave Michael Chavis his chance to be the hero, blasting yet another homer. This one would stand, and the Red Sox got their win.

After the drubbing they took on Tuesday, they Red Sox were looking for a good, clean start from Rick Porcello on Wednesday. They didn’t need perfection — though no one would complain if they got it — they just needed a solid outing to get them into the late innings. The Blue Jays don’t have the scariest offense in the league, and in fact rank near the bottom of the American League in most offensive categories. As we saw against Eduardo Rodriguez in company in the previous game, though, there is some young talent here that can punish mistakes if you make them.

So, it was on Porcello to get through a couple of quick innings and not let momentum build for this Blue Jays lineup. That’s exactly what he did. In fact, the righty nearly gave the team perfection in the first third of the contest. Over the first three innings he allowed just one hit, a leadoff single to Tuesday’s standout Rowdy Tellez. To be fair it wasn’t a typical single as it was launched off the center field wall with a strong throw by Jackie Bradley Jr. limiting him to just one base. Still, that was all they got off Porcello in the early going.

Meanwhile, the offense had a rough day on Tuesday as well, leaving runner after runner on base against Marcus Stroman. They did end up hitting three garbage time home runs, however, and the hope was that this momentum would carry on into this game. Unfortunately, the early going on Wednesday looked a lot like it did on Tuesday. The Red Sox got going early against Sanchez with Andrew Benintendi starting the game with a base hit before Mookie Betts drew a five-pitch walk to put the first two men on for Mitch Moreland. The first baseman then did what they did all day on Tuesday, which is to say he grounded into a double play. That essentially ended the inning, and they didn’t get anything out of it.

Fortunately, the third inning would go a little better. That inning started with Bradley getting hit by a pitch and then advancing to second on a hit-and-run play that likely would have been a ground ball had he not taken off on the pitch. After the second out of the inning, Bradley moved over to third on a wild pitch before Betts drew his second walk of the night. Moreland then came up with another chance, and this time he took advantage by smacking a base hit into right field. With a 1-0 lead, Betts then stole third which allowed him to score easily on a base hit from Xander Bogaerts.

So, the Red Sox had a 2-0 lead when Porcello took the mound again for the fourth. It was there that Boston fans got a quick glimpse of the future when Vladimir Guerrero Jr. led off the inning. Porcello got squeezed a bit after starting the count off 0-1, and then he caught just a bit too much of the plate with a fastball down and away. Guerrero jumped all over it, sending it over the wall in straightaway center field, and just like that the Red Sox lead was cut in half.

The Red Sox righty recovered from there, though, retiring the next eight batters he faced. In fact, the batter to break that streak was Guerrero yet again. It wasn’t so bad this time, though, as he managed just a bloop single into center field. Porcello got the next out after that to end the inning.

In the top of the seventh, the Red Sox offense got going a bit and added some much-needed insurance. It was Bradley starting this rally as well, this time by poking a double the other way into left field. He continues to use the opposite field more of late, and it’s leading to more success. That double was followed by back-to-back walks from Benintendi and Betts — the third of the day for the latter — loading up the bases for Moreland. He got a 2-0 pitch right in his wheelhouse that could have been sent to the moon but was instead fouled off. After that, he’d settle for a weak ground ball that resulted in the second out of the inning but also knocked in another run to make it 3-1. They had two more in scoring position for Xander Bogaerts, too, but he struck out to end the inning and Boston settled for just the one run.

Despite throwing just 80 pitches through his six strong innings, Porcello did not come back out for the seventh. Instead, it was Brandon Workman getting the call. Things looked good early as he recorded two quick outs with relative ease. Then, Freddy Galvis put a single through the middle to keep the inning going before Brandon Drury doubled out to left field. Suddenly there were two in scoring position with the potential tying run at second base with two outs. After walking Billy McKinney, the bases were all loaded up for Luke Maile. Workman walked him, too, and now it was just a one-run game with Eric Sogard coming to the plate. Finally, the inning ended with a ground ball to second base, leaving the bases loaded and keeping Boston’s lead at one.

Once again, though, the Red Sox were able to counter with some insurance, and this time it came with one swing of the bat. Rafael Devers has been hot for a long time now, but the power has just recently started coming through over the last couple of weeks. That continued here as he blasted an opposite field solo shot to get Boston’s lead back up to two.

With Guerrero coming up again to lead off the bottom half of that inning, Matt Barnes came on to pitch for the Red Sox. The righty got the leadoff man, but then Justin Smoak came to the plate. Barnes tried to bury a curveball against Toronto’s first baseman, but it stayed in the bottom of the zone and Smoak ripped it over the wall in right field, pushing Boston’s lead right back down to one. He did get out of the inning after that to preserve the lead.

That same score held into the bottom of the ninth, with Marcus Walden coming in for the save chance. He got a strikeout to start things off, but Drury followed that up with another double. A ground ball gave Walden his second out of the inning, but also moved the tying run just 90 feet away from home plate. The Red Sox righty couldn’t finish it off, allowing a base hit to Danny Jansen that tied this game up. The inning did end after that, and we were heading to extras.

The Red Sox got a single from Bogaerts in the tenth, but only sent three to the plate as he was caught stealing to end the inning. Walden then came back out for the bottom half of the tenth, and Smoak came through again. It wasn’t a home run this time, but the first baseman ripped a double into the right field corner with one out. After walking Tellez, it was Randall Grichuk coming to the plate. He ripped a single into center field, and that loaded the bases for Galvis with just one out. Boston brought Betts in for a five-man infield, but they wouldn’t need him as Walden got a huge strikeout. That left it all up to Drury, who had doubled in his previous two at bats. He hit one pretty deep, but Benintendi made the catch just shy of the warning track and Walden escaped as the game continued to the eleventh.

After a 1-2-3 top of the eleventh, Ryan Brasier came on and got a 1-2-3 inning of his own in the bottom half. That led us to the twelfth, and the Red Sox got two quick outs again. This time, though, Betts wasn’t about to allow another perfect inning. He wouldn’t allow a scoreless one, either, as the reigning AL MVP blasted a solo home run way out to straightaway center field to put the Sox back up by one.

That left it up to Heath Hembree to try and close it out in the bottom of the twelfth against the middle of the Jays lineup. The righty got two quick outs and it looked like the Red Sox were going home with the win, but Tellez had other ideas. Hembree threw a fastball down that was supposed to be up, and the Blue Jays young DH blasted a solo shot out to center field to tie this game back up. He did get out of the inning after that thanks to a great stretch by Moreland on a throw from Devers.

So, we headed on to the 13th inning, and you know we’re deep in the game because I’m using numbers instead of spelling out the inning number. I hate that. Anyway, the Red Sox got themselves another one-run lead on a solo blast. This time it was Michael Chavis blasting his tenth home run of the year — he’s the fastest Red Sox player to ten home runs since George Scott in 1996 — to take the lead back.

Hembree then came back out for the bottom of the 13th to once again try and close this one out. This time, he did finish things off and the Red Sox finally got their win.

The Red Sox and Blue Jays will finish off this series with a getaway day afternoon contest on Thursday. Boston will send Ryan Weber to the mound for his first start with the Red Sox while Toronto still hasn’t announced their starter. First pitch is scheduled for 12:37 PM ET.

Over The Monster https://www.overthemonster.com/2019/5/22/18636496/red-sox-blue-jays-michael-chavis-mookie-betts-rick-porcello-brandon-workman-barnes-walden-hembree
Categories: Sports