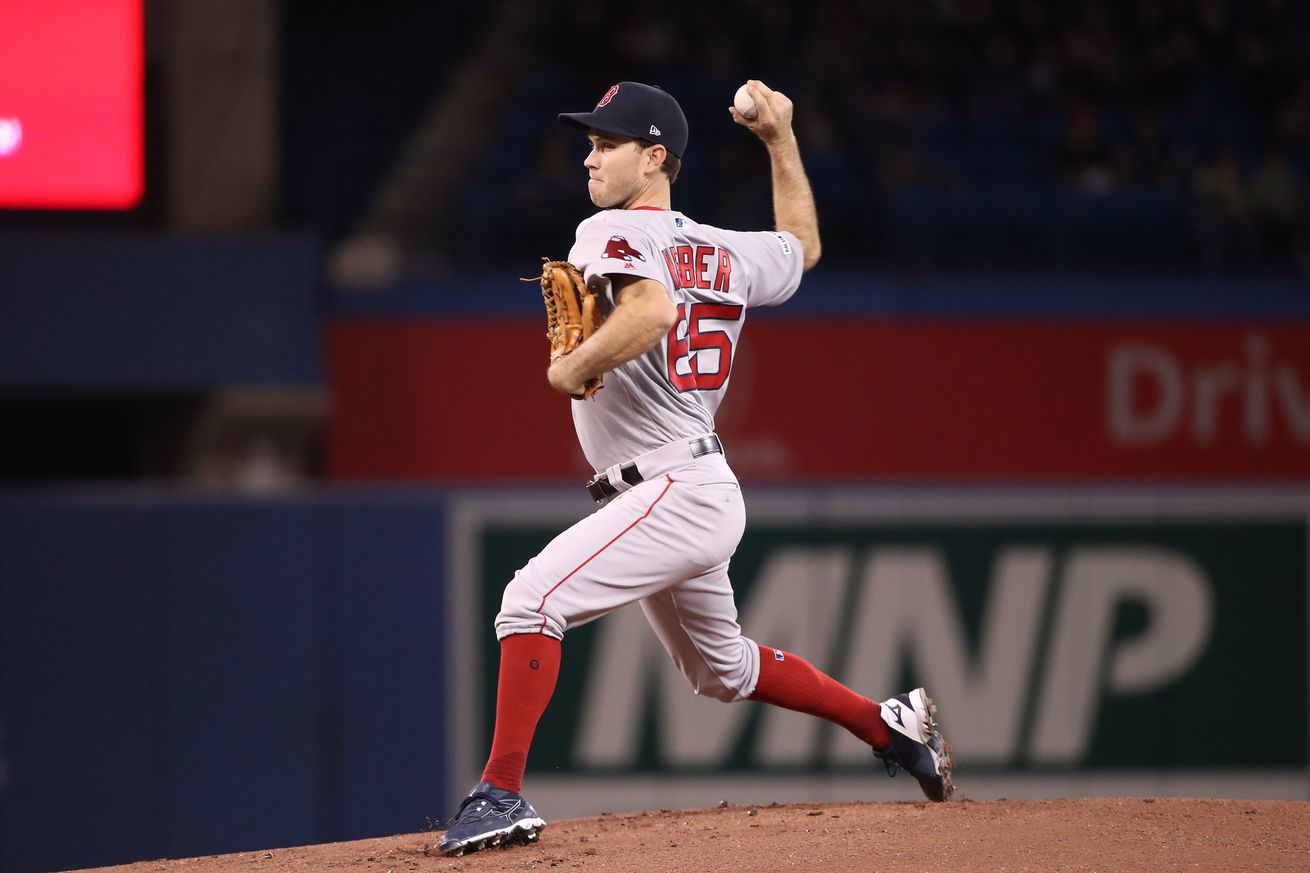 Along with some unlikely heroes on offense.

The expectations for Ryan Weber weren’t super high coming into Thursday’s series finale in Toronto. The righty hadn’t started a big league game in a little over two years and generally the Red Sox have only gotten about 12 outs from this spot in the rotation since Nathan Eovaldi hit the injured list. That was likely the expectation here, with the idea that Hector Velázquez would likely be coming in at some point in the fourth inning to give a multi-inning stint out of the bullpen. Instead, Weber gave Boston six outstanding innings and over 90 pitches to help save the bullpen ahead of the upcoming weekend series in Houston. He was the story of this win, but the Red Sox also got an all-around performance from a strange lineup, with multi-hit contributions coming from Jackie Bradley Jr., Eduardo Núñez and Steve Pearce. As we all expected. It was a frustrating series at times, but ultimately the Red Sox took three of four in Canada.

All things were pointing towards weirdness being in store for Thursday afternoon’s series finale between the Red Sox and Blue Jays. After playing until 11:37 on Wednesday night in a 13-inning affair that ended just 13 hours before this game was set to begin, both sides figured to be pretty tired. The Red Sox went and got the weirdness started before the first pitch was being thrown, putting out a lineup with Michael Chavis leading off, Steve Pearce in left field and Mookie Betts DH’ing, among other things. They also handed the ball to Ryan Weber for his first major-league start since May 13, 2017. Given the quick turnaround and the wild lineup, no one was expecting the prettiest of games.

The Red Sox offense got a chance thanks to some sloppy play right away, too. Mookie Betts was the first baserunner of the afternoon when he drew a walk against Clayton Richard. Control issues would be a factor all day against Richard, who hadn’t started all year due to injury. He surely looked rusty, and his control issues manifested themselves on throws to first base as well. He tried to pick off Betts at first base and his throw would have gotten him had it been on target. Instead, it got by Rowdy Tellez and Betts wound up on third base with just one out. Unfortunately, as has been the case all series they left the runner on base.

Weber, meanwhile, got through a quick 1-2-3 first inning before finding himself in some trouble in the second. The rally for Toronto started for Tellez, who has absolutely destroyed Red Sox pitching all week. The big first baseman ripped a double out to right-center field to lead that inning off before Brandon Drury singled on a bloop out to right field. It looked like Eduardo Núñez could have had a play on it, but some hesitation allowed it to drop. With two on (Tellez had to hold at second in case the catch was made), Freddy Galvis ripped a double into left field to score one and put a pair in scoring position with nobody out. It was looking like the Blue Jays might build a comfortable lead early in this game, but Weber masterfully got out of it. He induced a fly ball to right field that was too shallow to score the run, then got a pop up on the infield before Jonathan Davis grounded out to end the inning. Toronto had a 1-0 lead, but it should have been much more than that.

Besides that second inning, Weber was actually really impressive in this game. After getting into trouble in that second inning, he came back with a perfect third. Things did get a little weird in the fourth when he hit Tellez with an 0-2 pitch. It was very clearly unintentional, but that didn’t stop home plate umpire Stu Scheuwater from warning both benches. The game would continue after both managers came out to kindly express their disagreement, and Weber came out to retire the next nine batters he faced to end his incredibly strong outing. The righty ended up tossing six innings in which he allowed just the one run on three hits with four strikeouts and zero (0) walks.

Meanwhile, the Red Sox offense didn’t allow the team to stay in a hole for too long, as they came back out in the top of the third to get on the board themselves. Núñez started off that inning with a base hit before moving on to second base on a balk call. He’d then move on over to third on a ground out before Michael Chavis grounded out himself, allowing Núñez to come in. It wasn’t the most thrilling way to get runs on the board, but the score was tied.

The score would stay all knotted up until we got to the sixth, when the Red Sox got going again. Reliever Sam Giviglio was in the game at this point for his second inning of work, and Xander Bogaerts started the inning with an infield single. That was quickly followed by a double rocketed to right-center field by the red-hot Rafael Devers, and just like that Boston was up 2-1. They’d add another run as Steve Pearce got a base hit out to deep left field, and he got to second base on the ill-advised throw home. Pearce would then move over to third on a fly ball, but he wouldn’t score and Boston had to settle for the 3-1 lead.

They’d carry that momentum into the seventh, too, both in the good and the bad way. The inning started with a ground-rule double out to left field by Jackie Bradley Jr., who continues to heat up at the plate. That he’s hitting so many extra-base hits in the air to the opposite field is the best possible sign for his success. He’d then move over to third on a base hit from Chavis before Betts came through with a double. That gave the Sox a 4-1 lead with two runners in scoring position and nobody out. It’s here where the negatives came in as they’d go down with a pair of strikeouts before eventually stranding the runners.

So, it was only a three-run lead as the bullpen came in to try and finish off the last three innings. Travis Lakins, who was just called up earlier in the day, got the call for the bottom of the seventh and promptly allowed a leadoff double to Brandon Drury. He’d get out of it from there, though, and keep the Blue Jays off the board.

After the Red Sox tacked on another insurance run in the eighth on an RBI single from Núñez, Ryan Brasier came on to pitch for the bottom half. He came through with an easy 1-2-3 inning. The offense then added three more in the ninth including two on Steve Pearce’s first homer of the year before Velázquez came on for the bottom half. He’d give up a home run to Justin Smoak to lead off the inning but nothing more as the Red Sox finished their series win in Canada.

Boston will now head out west to Houston for a three-game set beginning on Friday. They’ll be sending Chris Sale to the mound for the start of that series to take on old friend Wade Miley. First pitch is scheduled for 8:10 PM ET.

Over The Monster https://www.overthemonster.com/2019/5/23/18637451/red-sox-blue-jays-ryan-weber-eduardo-nunez-jackie-bradley-jr-steve-pearce-lakins-brasier
Categories: Sports