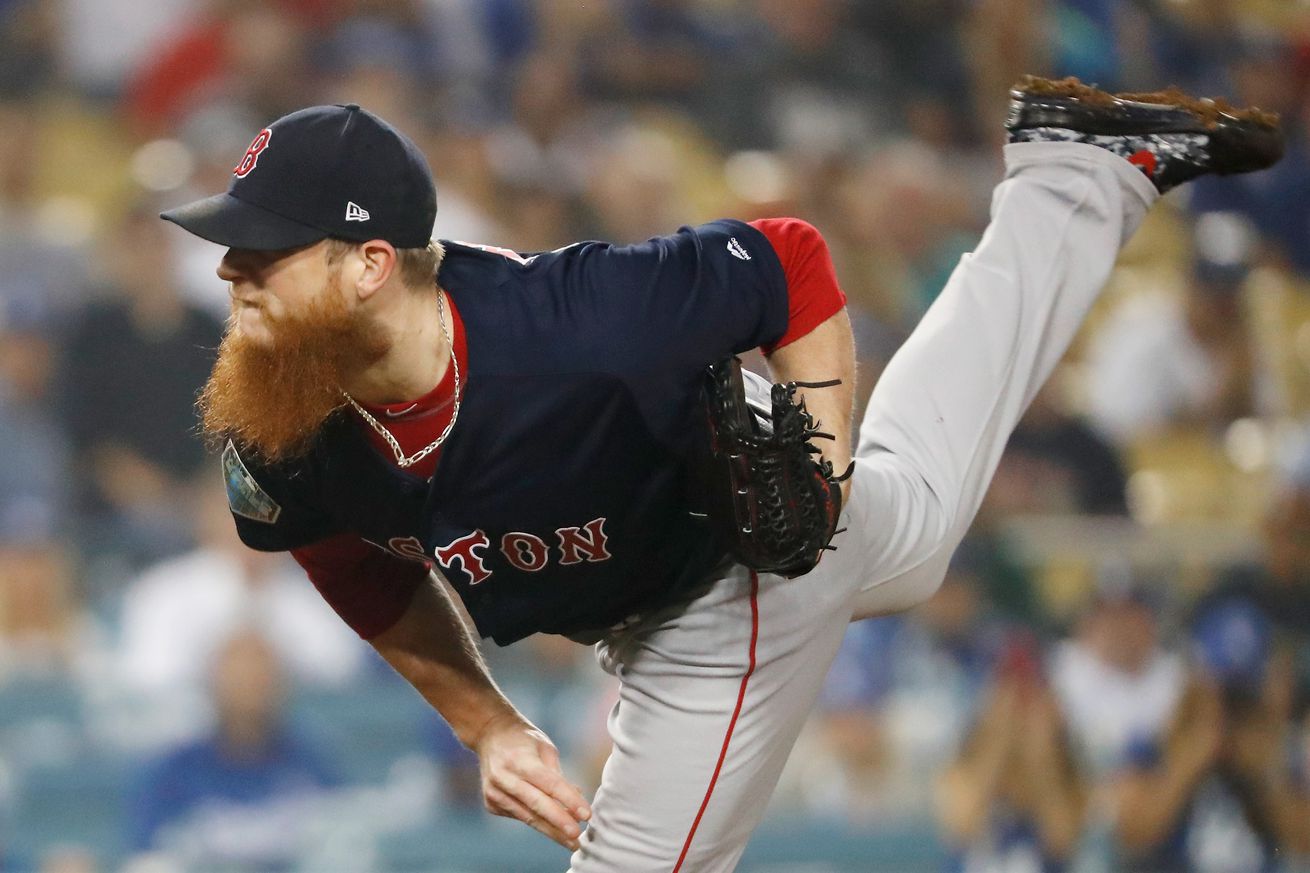 We haven’t done this in a while, to be fair

It’s been a little while since we talked about Craig Kimbrel. In fact, as far as I can tell we haven’t really mentioned the closer in a post more than in passing since before the regular season got underway. If you only pay attention to the Red Sox and not the league as a whole, it’s understandable if you’re not up on your Kimbrel knowledge. You probably assume he found a new team and is doing Kimbrel things somewhere. Instead, he is still a free agent because very little in baseball’s economic system makes sense anymore. Bullpens, as we know, are of growing importance in today’s baseball environment, and yet it seems that just about every contender has legitimate complaints to make about their relief corps. Despite that fact, one of the best relievers of all-time, still only 30 years old (he turns 31 in less than a week), remains available for only money.

This isn’t a post about what’s gotten us to this point, with Kimbrel — and Dallas Keuchel, for that matter — hanging out in free agency. There’s a complicated, nuanced discussion to be had about Kimbrel’s initial ask as well as the lack of knowledge we have about concrete offers he’s received and which side of the negotiation table has taken control of the media narrative by feeding leaks. That’s not a topic I feel particularly compelled to get into today. Instead, I’d prefer to simply focus on where we are now, on May 23.

For Kimbrel, as I said, where we are now is unemployed, waiting for a contract to sign from some team in Major League Baseball. There really hasn’t even been much discussion about him beyond the curious ogling that he is still available. On MLB Trade Rumors, the last time he was brought up was May 12 when the Rays were connected to the former Red Sox closer. Prior to that, the last real rumor was back on April 20 with the Mets and Brewers being connected. That’s…..not a lot!

The big issue around Kimbrel right now, at least if you believe the narrative being fed to reporters from teams, is the draft pick compensation attached to him. The Red Sox offered him a qualifying offer worth one year and just under $18 million, which he declined in search of a longer deal. Declining that offer meant whoever did sign him would lose a draft pick. If he signs after the draft, which starts a week from this coming Monday, then the compensation factor goes away. So, the belief is that teams are waiting for that point. Of course, there will likely be a new excuse — like it will take too long to build him up for a signing to be worth it — to come out at that point. With the draft pick issue, however, this is where the Red Sox could have an advantage if they want to jump in early.

The Red Sox simply would not be as affected by signing Kimbrel as other teams around the league, as they are the only team who wouldn’t lose a draft pick for inking a contract. Well, sort of. They would lose the draft pick they’d receive in return for Kimbrel signing somewhere else. However, at this point it seems unlikely that pick is ever coming anyway. Even on the off-chance it did, it was only going to be after the fourth round, which isn’t all that valuable of a pick anyway. It’s not nothing, but it shouldn’t be enough to dissuade the Red Sox from getting Kimbrel back on this roster.

It’s fair to wonder at this point why the Red Sox would go out of their way to add him. Boston’s bullpen, all things considered, has been pretty good this year! By park-adjusted ERA, their relief corps has been the sixth best in all of baseball. By park-adjusted FIP, they’ve been the seventh best in the league. That’s all good! Matt Barnes has continued to pitch at an elite pace. Brandon Workman and Marcus Walden have looked very good, too. Kimbrel isn’t replacing those guys, though, and that’s the common misconception in this picture. People have enjoyed that Barnes is being used in different situations as the best reliever in the bullpen, and that’s great. I like it too.

If Kimbrel is added, Barnes will continue to be used in the exact same role. What happens is that guys like Workman and Walden can be used earlier in games and be used less often. Kimbrel would be taking the roster spot of guys like Tyler Thornburg or Colten Brewer, not any of the relievers who have contributed positively this year. To be a championship-caliber bullpen, you really need multiple elite arms in the late innings and right now the Red Sox only have one. Maybe Workman and Walden will continue to progress and get close to that status, but that’s tough to bank on. Pairing Kimbrel and Barnes in the late innings has worked before, and it can work again.

Of course, there are reasonable arguments against signing Kimbrel. We saw him in the postseason last year when he couldn’t find the strike zone. We shouldn’t be making decisions based on that small of a sample, but it’s impossible to deny how hard that was to watch. My counter would be that Workman, who is ostensibly one of the keys in this year’s bullpen, has walked 17 batters in 22 1⁄3 innings so far this season. He’s faced 87 batters in that time compared to the 50 Kimbrel saw in the postseason.

There’s also the fact that, as mentioned above, it will take Kimbrel some time to build up for major-league action. We don’t know how long that will be, as we’re not privy to how he’s been working out since the end of last year. Still, it won’t take him any longer to build up than it would take for guys like Durbin Feltman or Travis Lakins to force their way onto the major-league roster. Finally, there’s the luxury tax issue. We don’t know how much it would take to sign Kimbrel at this point, but it’s reasonable to think he may be willing to take a one-year deal to try and re-enter free agency next winter without compensation being attached. If that’s the case, the Red Sox should throw themselves all-in here and be willing to go over the highest threshold again in 2019.

There’s little reason to believe the Red Sox are going to sign Kimbrel beyond the fact that somebody has to at some point, presumably. They should be there, though. Their bullpen has been good thus far, but they’ve been walking a bit of a tightrope of late and the guys at the end of the roster have not been impressive at all. The thing about bullpens is that you can add someone like Kimbrel while still keeping the relievers who are doing the job. All signing the future Hall of Famer does is add another good arm to the group without taking any away. If the Red Sox truly have championship aspirations this year, and there’s little reason to believe they don’t, they should be all-in and sign the very good reliever who’s available for just money rather than waiting a couple months before trading minor-league talent for a reliever who’s probably going to be worse than Kimbrel.

Over The Monster https://www.overthemonster.com/2019/5/23/18636873/craig-kimbrel-free-agent-red-sox-workman-walden-brasier-thornburg-brewer
Categories: Sports