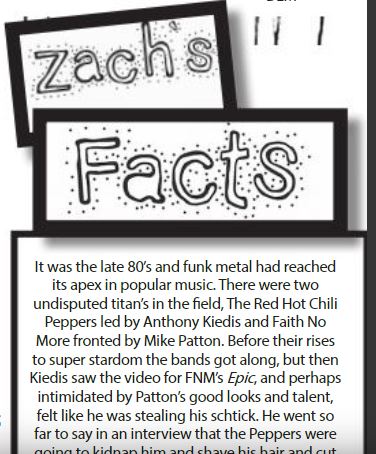 It was the late 80’s and funk metal had reached its apex in popular music. There were two undisputed titan’s in the field, The Red Hot Chili Peppers led by Anthony Kiedis and Faith No More fronted by Mike Patton. Before their rises to super stardom the bands got along, but then Kiedis saw the video for FNM’s, Epic, and perhaps intimidated by Patton’s good looks and talent, felt like he was stealing his schtick. He went so far to say in an interview that the Peppers were going to kidnap him and shave his hair and cut off one of his feet so he would have to find his own style. Patton never offered a comment to this so things didn’t amount to much until years later when Patton’s other group, Mr. Bungle, released an album called, California. This stoked Kiedis’ passions again, because California was to be released the same month as the Peppers, Californication. Mr. Bungle’s label opted to delay the album by a month to avoid confusion. Matter settled right? Wrong, apparently Mr. Bungle began hearing that the Peppers, specifically Kiedis, were refusing to play festivals if Bungle was on the bill. Patton and the band snapped, airing the grievances in the press and eventually performing a mock set of the RHCP at Halloween show in Kiedis home state of Michigan, parodying the bands style and drug use. Do the two funk-punk legends still hate each other? When asked recently, Patton says, “It’s not worth talking about. I’ve no idea what it was about then and I don’t know now. But I bet we’d have a warm embrace if we saw each other now.” I wonder what Anthony thinks, is it all water under the bridge?