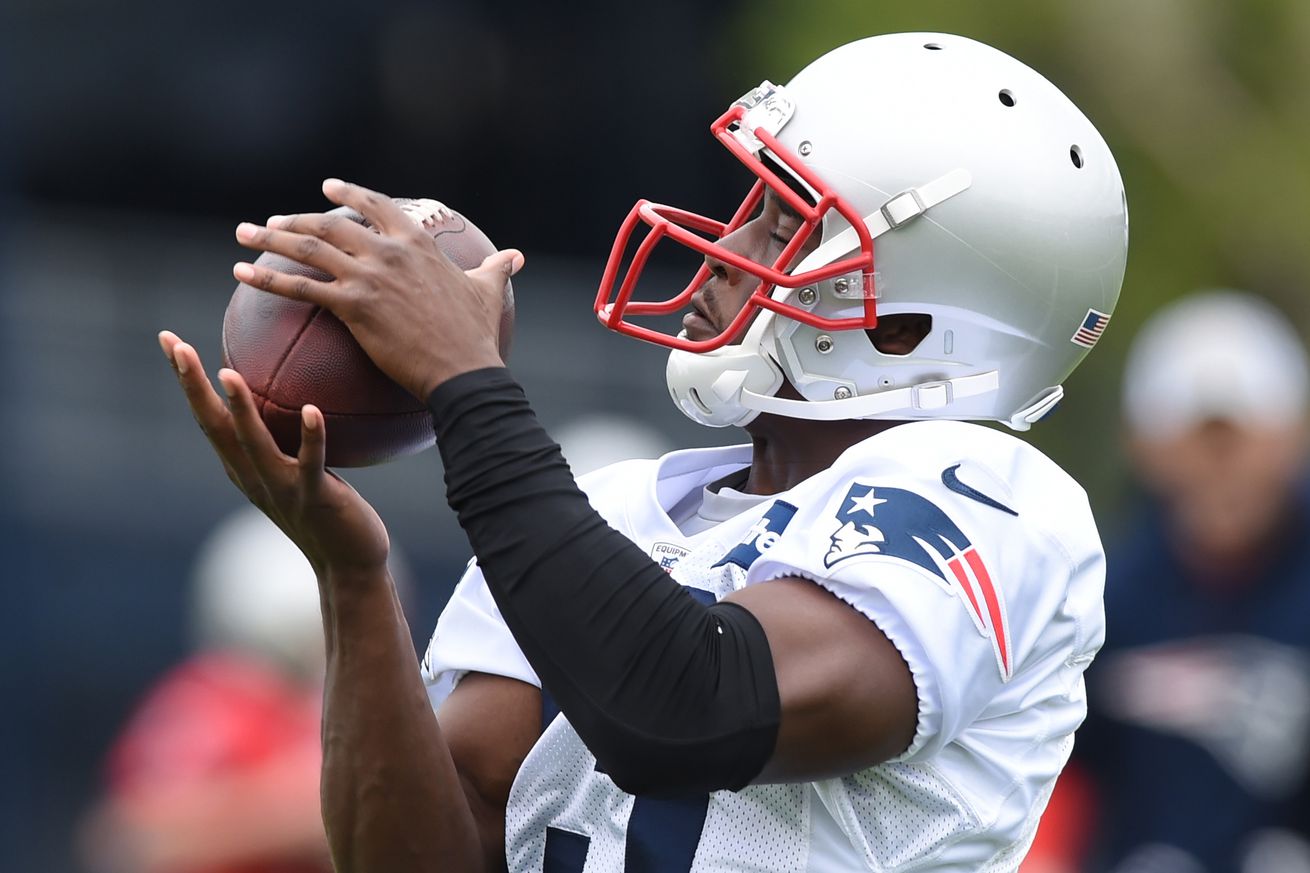 The New England Patriots’ organized team activities are in full swing, and Thursday saw the team’s first appearance in front of the media. The almost two-hour long session held on the fields behind Gillette Stadium was little more than a first taste of the 2019 Patriots, but it already produced some memorable moments — in terms of production and when it came to personnel usage both on and off the field.

With that in mind, let’s quickly run through six of the bigger storylines to come out of the third and final OTA practice of the week.

The Patriots’ offensive tackle depth is not exactly ideal at the moment: with Jared Veldheer retiring after just eight days in New England, and both Isaiah Wynn and rookie Yodny Cajuste out due to injury, the team turned to their starting left guard to fill in. Joe Thuney lined up exclusively as the team’s left tackle on Thursday, with Ted Karras, Brian Schwenke, Cole Croston, Dan Skipper and at one point even David Andrews taking reps at left guard.

Thuney is of course no stranger to playing on the left end of the line: the 26-year-old was a starter at left tackle during his senior season at N.C. State, and has the build and experience to be successful in that position as well. That being said, it would still be a minor surprise if anybody but Wynn lined up as the starting left tackle once the season opens in early September. But what yesterday again showed is that the Patriots might need to add an extra body at the position for the sake of stability at the other four spots.

The punter competition will be fun to watch this summer

While incumbent Ryan Allen was absent on Thursday, the punter competition shapes up to be one of the most intriguing of the summer. After all, fifth-round rookie Jake Bailey already looks like a stronger challenger than Corey Bojorquez ever was: he displayed a strong leg as well as plenty of hang time and also was given reps as a kickoff specialist. His directional kicking and consistency will be a deciding factor whether or not he unseats Allen, but early on Bailey appeared to be comfortable in the position he’s in.

N’Keal Harry is off to a good start

When you invest a first-round draft pick in a player, you expect him to make an impact sooner rather than later. In wide receiver N’Keal Harry’s case, it looks as if ‘sooner’ is right now: just one month after hearing his name called to close out round one, Harry impressed in what is only his third ever OTA practice. The rookie saw plenty of reps and proved himself to be a reliable target capable of winning one-on-one matchups and out-muscling his opponents in crowded situations.

While he still has ways to go and obviously needs to build a rapport with starting quarterback Tom Brady once the future Hall of Famer returns to the field, the early signs are encouraging for Harry. He certainly catches the eye, as his size in combination with his athleticism and ability to catch the football all stand out.

Speaking of standing out, so does New England’s cornerback group. Led by All-Pro Stephon Gilmore, the competition for practice reps and by extension playing time shapes up to be an exciting one. Yesterday, for example, two players stood out in particular: second-year man J.C. Jackson — coming off an impressive rookie year that saw him go from undrafted signing to de facto starter opposite Gilmore — registered a pair of pass breakups.

Jackson is in line for the famed second-year jump, while another youngster might also see regular action if he can build on the small sample size that is Thursday’s practice. Second-round rookie Joejuan Williams stood out because of his size, and already made use of it as he registered a pass breakup during the session and also came a way with an interception in a team drill that would likely have been a pick-six in a game.

All in all, the depth and quality at cornerback is apparent — especially considering that a player like last year’s second-round pick Duke Dawson Jr, who played primarily in the slot on Thursday, also is part of the mix.

When he with the Patriots from 2008 until his retirement following the 2015 season, Jerod Mayo was a vocal presence at the linebacker position — a team captain and leader on a team in transition. Now manning the sidelines as New England’s new inside linebackers coach, his approach appears to be the same: Mayo is an active communicator and taking a hands-on approach with his players; some of which former teammates of his.

While the rookies draw plenty of attention during organized team activities, the veteran offseason additions should also be kept in mind. Yesterday, for example, three players stood out: Benjamin Watson and Matt LaCosse looked good as the men atop the tight end depth chart, while wide receiver Maurice Harris — as pointed out by CLNS Media’s Evan Lazar — saw numerous reps in a gadget-player role like the one previously held by Cordarrelle Patterson.

While a lot can and will happen until training camp and the preseason, the veteran trio is off to a solid start in terms of usage and production in a limited setting. Once live contact is allowed, of course, they will get tested in another way, but at this point, it seems as if the coaching staff feels confident when it comes to putting plenty on respective plates of Watson, LaCosse and Harris.