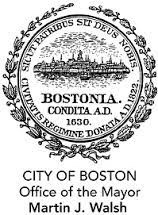 “This second ambulance will bring major benefits,” said Mayor Walsh. “It will help EMTs move more quickly and efficiently throughout East Boston, increasing capacity if there is an emergency happening at Logan Airport. It will reduce response times for our residents who need immediate medical care, saving even more lives.”

“Boston EMS is a national leader in emergency medical services. And this opportunity to add additional resources to serve residents and visitors to the city of Boston with this new facility is an important one,” said EMS Chief James Hooley. “We are happy to be here in East Boston today with Mayor Walsh and Massport.”

Mayor Walsh, EMS and Massport collaborated on the expansion of the station at Logan to give EMS a permanent home which can serve not only the airport but the entire East Boston neighborhood.

“At Logan Airport, we work collaboratively with Boston EMS, and when the City wanted to add a second ambulance to service East Boston, it only made sense that we upgrade and expand the existing facility,” said Massport Acting CEO John Pranckevicius. “It is part of Massport’s mission to be a good neighbor to our surrounding communities. This new facility will provide dividends to the growing East Boston neighborhood and to Logan Airport for many years ahead.”

Mayor Walsh’s FY20 budget includes additional resources to promote diversity in recruitment classes for the EMT City Academy program as well as resources for another Community Assistance Team, also known as Squad 80. Squad 80 is a two-person team that travels in an SUV and answers calls where patients have a low frequency of being transported to the emergency room. Squad 80 frees up city ambulances, making more ambulances available for priority calls that need to get patients to the hospital. It also connects people to our recovery or homeless services and other city programs.

The FY20-24 Capital Plan allocates an additional $375,000 for design and construction of a new EMS garage with staff amenities in the Seaport district. Both investments will allow the City’s services to transform and expand as the City’s population does the same.

Today’s ribbon cutting falls in the middle of the 45th Annual National EMS week, a week designed to honor and celebrate the men & women who provide day-to-day lifesaving services.

Boston EMS is the primary provider of emergency medical services for the City of Boston and is a nationally recognized leader in the field of pre-hospital emergency medicine. The department leverages the latest advances in both medicine and technology to bring high-quality, compassionate care to the people of Boston. Boston EMS also plays a key role in the City’s emergency preparedness efforts and provides community programming designed to educate the public about important health and safety topics.