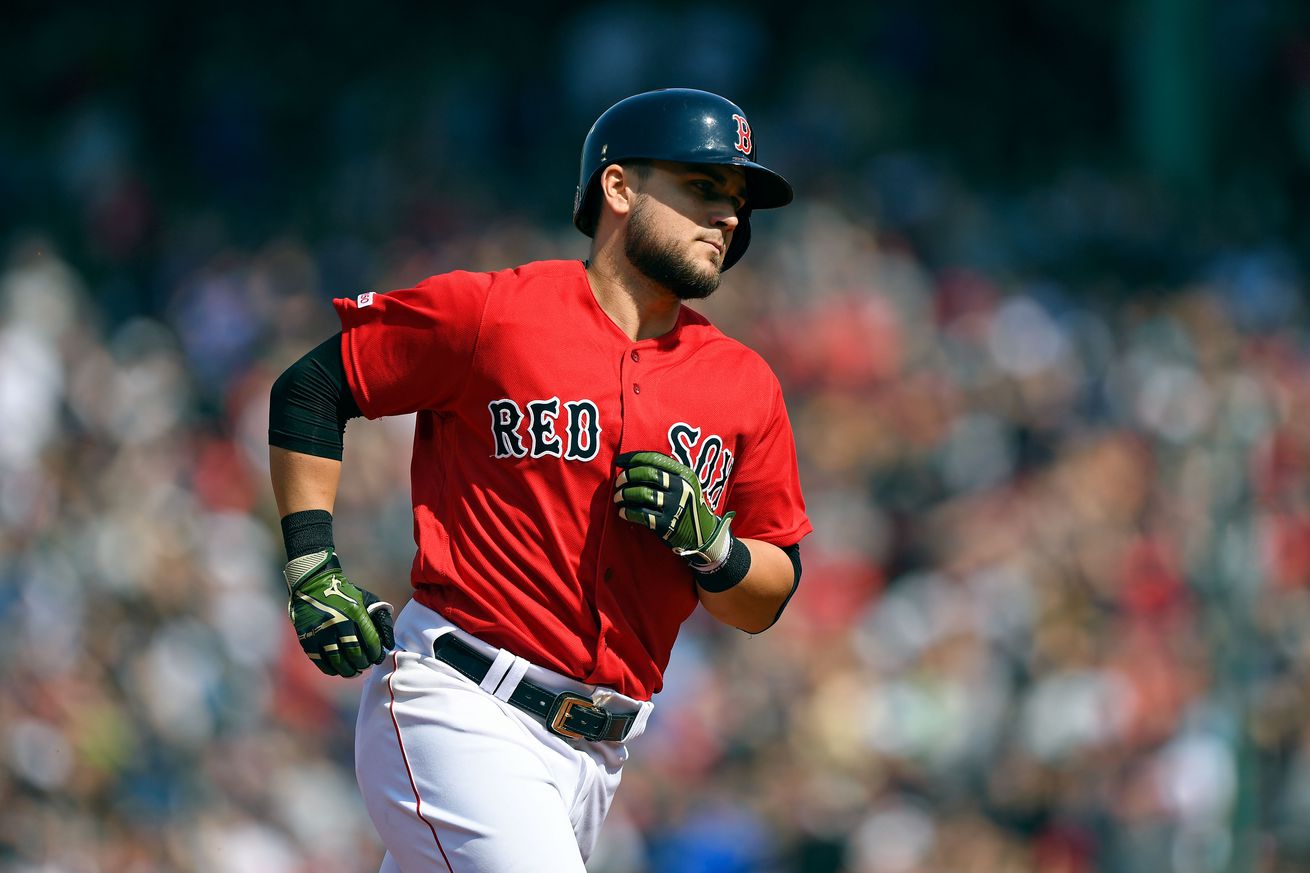 The Astros have the third best record in baseball and are tied for the highest run differential thanks to the second-best pitching staff in the AL along with the fourth-best offense.

Down, for them at least. When the Astros came into Fenway last weekend they had won their previous eight games before taking the first two games of that series to push their streak to ten. They then fell to the Red Sox in the series finale to break that streak, and then after winning two against the White Sox they dropped the next two. So, in all they’ve lost three of five, which is terrible for them. Of course, if you zoom out they’ve still won 12 of 15 and 15 of 19.

Sale has been a revelation since the calendar flipped to, and really since the end of April. It certainly seems safe to say now that he was building himself up early in the year as he has looked like the elite-level ace we all expect over his last four-to-six starts. He has racked up double digit strikeouts in four straight outings and five of his last six. Dating back to an April 23 start against the Tigers, he has tossed 38 1⁄3 innings over six starts with a 2.35 ERA, 69 strikeouts and 11 walks. His last time out was against this same Astros lineup, and to be fair he did take a bit of a step back. His command wasn’t quite as sharp as we’ve seen and the Astros have some of the best plate discipline in the game. That resulted in five walks, though he did still strike out ten and allowed only three runs. He’ll look for a crisper outing on Friday.

Red Sox fans know Miley fairly well from his time with the Red Sox back in 2015, which was of course the “He’s the Ace” season. The lefty was fine but not great in that year and after being traded away he got even worse for a couple years. Then, in Milwaukee, the lefty turned it around in a big way last season in an injury-shortened year before signing on with Houston this season. Miley has continued to look solid this year with a 3.51 ERA over his first ten starts, though his 4.34 FIP and 4.68 DRA suggest he could take a step back. The big difference between 2019 and 2018 has been the home run rate, as he’s already allowed ten homers this year. Miley did pitch at Fenway last weekend, allowing three runs (two earned) over five innings on seven hits and two strikeouts without issuing a walk. Miley leans heavily on a high-80s cutter to go with a low-90s fastball, a changeup and a curveball.

David Price made his return from a short IL stint this past week in Toronto and picked up right where he left off. Alex Cora did take it a bit easy on his left-handed veteran, pulling him after five innings despite having thrown only 67 pitches. While he was on the mound, though, his command looked good as he didn’t walk anyone and allowed only three hits. He’s now on a streak of allowing three or fewer runs in five straight outings. This will surely be his biggest test of the year so far, but it will also be the site of his huge ALCS performance. The last time he pitched in Houston he helped clinch a World Series berth with six scoreless inning that included nine strikeouts.

Peacock emerged as a legitimate weapon in the Astros rotation two years ago in something on a swingman role before being converted to (mostly) a full-time relief role last year. He’s now back in the rotation on a full-time basis, and he’s been good over ten appearances and eight starts. His strikeout rate is down from the previous ten years, though he is still setting down a batter per inning. Overall, the righty has pitched to a 3.59 ERA with a 3.13 FIP and a 3.87 DRA. He was scheduled to start last weekend but the Astros shuffled things around a bit so the Red Sox didn’t end up seeing him. He is on a hot streak, though, pitching to a 0.53 ERA over his last three starts and 17 innings with 24 strikeouts and five walks. Peacock will feature a pair of 92-93 mph fastballs along with a slider.

This is going to be a big test for Rodriguez, who is coming off a rough start his last time out in Toronto. In that outing, he got off to a strong start but fell apart in the fourth. He allowed a home run to Rowdy Tellez and everything snowballed from there. Things got bad enough quickly enough that he earned a rare non-pitching change mound visit from Alex Cora. There are times he lets these rough starts carry over into his next few outings, so pay attention to how he’s pitching. If he’s nibbling around the zone and just generally pitching scared, things could be troublesome.

Verlander is apparently going to be good forever, as the 36-year-old veteran pretty much looks as good as he ever has. The longtime Tiger had his career rejuvenated by a 2017 trade to Houston, and he’s just kept it going this year. The Red Sox were fortunate enough to miss him in the last series, but they weren’t going to get that lucky twice. Verlander has made 11 starts so far this year with a 2.24 ERA, a 3.63 FIP and a 2.93 DRA. The one weakness for the righty is that his fly ball tendencies can lead to home runs, but he’s been dealing with the for four years now and has managed to pitch around it. The Red Sox did score six runs over 12 innings across two ALCS matchups last year against Verlander. He will feature a mid-90s fastball to go with a slider and a curveball.

Much of the rest of this post is copied and posted from last weekends preview as not much has changed in the last five days.

Miley was mentioned above.

Josh Reddick was, of course, a homegrown outfielder from the Red Sox system early in this decade before being traded to Oakland for Andrew Bailey prior to the 2012 season. Since then, Reddick has put together a solid career in Oakland and Houston, with a half-season with the Dodgers mixed in.

Ryan Pressly is a former Red Sox draft pick who they lost in the Rule 5 Draft back in 2012. He has since emerged as one of the game’s better right-handed relievers who was a potential trade target last summer.

Alex Bregman was viewed as a potential MVP candidate heading into the year, and he’s done nothing to take away from that potential so far this year. He’s walking a ton, striking out very little and hitting for massive power. The third baseman has been one of the better hitters in baseball despite a .243 BABIP.

George Springer has been even better than Bregman and has been the Astros’ best player so far this year. Hitting at the top of the lineup, Springer continues to cut down his strikeout rate while drawing walks and he is the most powerful leadoff man in all of baseball. He did leave last Sunday’s game with injury and hasn’t played since, though they hope he’ll play in Friday’s game.

Carlos Correa had a disappointing year in 2018 that was marred by injury and underperformance, but the former number one overall pick is thriving in 2019. The shortstop’s plate discipline could be better, but when he puts the ball in play it’s almost always with authority.

Michael Brantley is a new face to the Astros this year but the longtime Indians left fielder has been a huge addition. Brantley is hitting for huge power while also making contact at the same absurdly high rates as he always has.

Yuli Gurriel puts the ball in play all the time which leaves him open to variance, but he’s not hitting for the power we’ve seen from him at other points.

Robinson Chirinos has been outstanding for the Astros as their new starting catcher. He strikes out a bit more than you’d like, but he makes up for that with huge power and good patience.

Tyler White has struggled this year with one of the highest strikeout rates in the game and very little power to back it up.

Aledmys Díaz has filled in as a starter for the injured José Altuve admirably, putting the ball in play with authority on a regular basis.

Roberto Osuna was a gross addition by the Astros last year, who took advantage of a low price due to an arrest for assault on the mother of his children in 2018. He’s back on the mound after a 75-game suspension and is pitching well.

Pressly, Héctor Rondón and Will Harris combine for a more-than-formidable group of set-up men in front of Osuna. These three relievers have ERA’s of 0.00, 2.03 and 1.32, respectively.

José Altuve has been out for about a week with a hamstring strain, and there’s still no timetable for the former MVP’s return.

Lance McCullers Jr. had to undergo Tommy John surgery last offseason that will keep him out for this entire 2019 season.

Joe Smith ruptured his Achilles Tendon last winter. He’s working his way back but he’s still got at least a month until he’ll return if everything goes well.

Collin McHugh was placed on the IL earlier this week with elbow discomfort. There’s no timetable on his return at this point, but it likely will be a little while.

Francis Martes is a former top prospect who was suspended for 80 games for failing a PED test before the season. He was recovering from Tommy John surgery anyway.

The Astros have a retractable roof so weather isn’t a major factor here, but it’s going to be 90 and sunny every day out there.