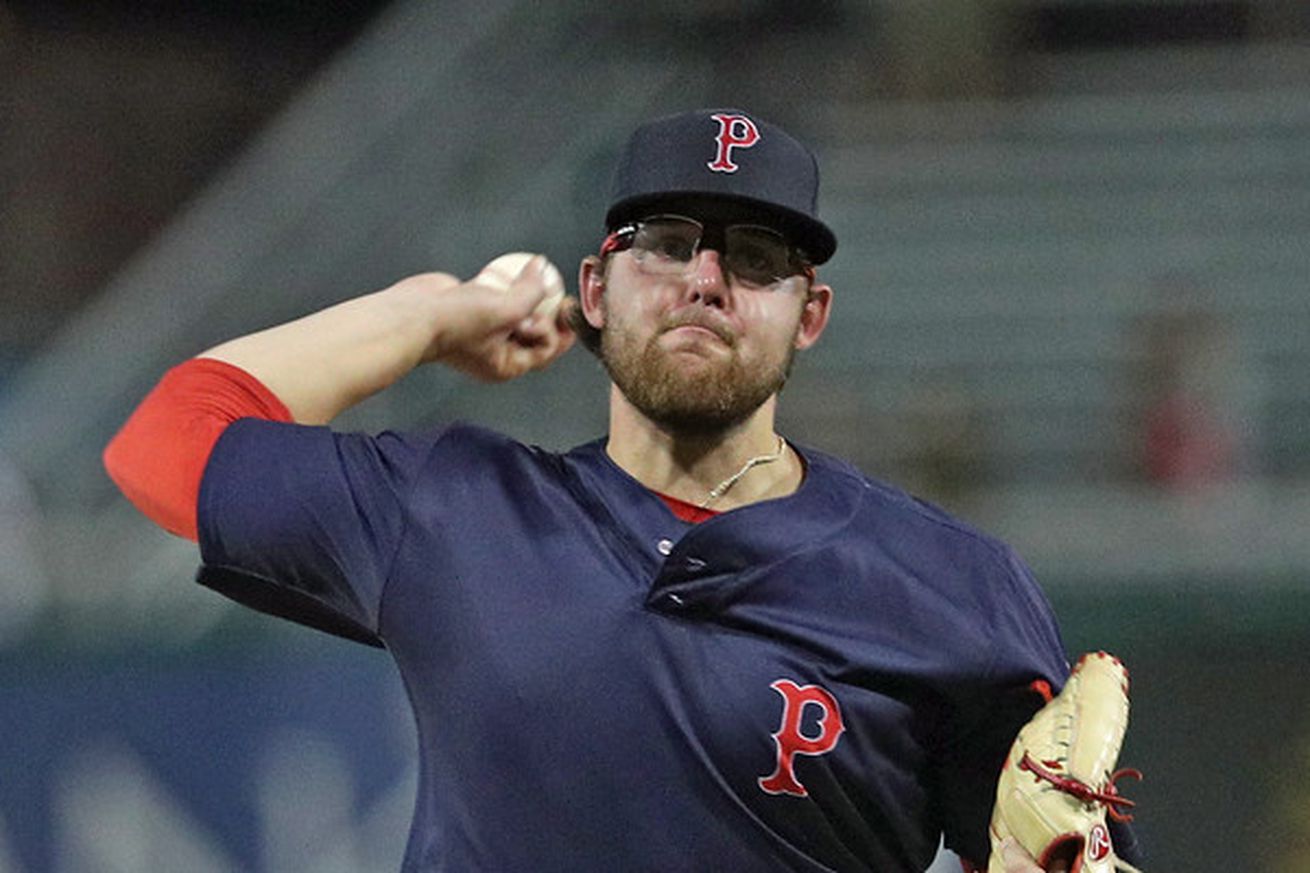 We are only a couple weeks away from the MLB Draft, which has sort of snuck up on me this year. The reasons for Red Sox fans not quite caring as much about the draft this year are pretty obvious. For one thing, they are firmly in the middle of their contention window and the concern with this organization is heavily tilted towards the present day than the future. More importantly, after exceeding the luxury tax threshold by more than $40 million last season, their first selection has been moved back ten spots. So, instead of selecting with the 33rd pick their first pick is not until number 43.

Despite the lack of excitement right now, we know the draft can be important even without a high pick. This is not the NBA draft where the best players are generally at the top. Baseball’s draft is so long and the development process takes so much time that there are always diamonds hidden in the rough. Just look at Mookie Betts, one of the two or three best players in the world, who wasn’t picked until the fifth round.

In preparation for this year’s draft, I’m going to change it up a little bit. Over the last couple of years I’ve looked back at the previous five drafts to set up the state of the farm system. We all know the state of the farm, though. It’s getting better, but it’s still decidedly not good. I thought this year it would be more useful to look back at the last three years of drafts, or the three years of drafts since Dave Dombrowski has led the front office. Granted, the scouting department runs draft rooms much more than the President of Baseball Operations, but Dombrowski obviously has some influence. So, over the next four days we’ll look at each of the four classes of players — high school bats, college bats, high school arms and college arms — from the three Dombrowski draft classes. Today we’ll look at the college arms the Red Sox have taken either in the top ten rounds or given above-slot deals in recent years.

After selecting Jay Groome with their first pick in this 2016 draft, the rest of the arms the Red Sox focused on further down the board came from the college ranks. Looking back, things have gone pretty well for this class, though the Red Sox haven’t reaped all of the benefits. Anderson was an intriguing prospect out of the draft who served as a reliever for a loaded Florida Gators team but was turned into a starter as a pro. He was eventually traded to San Francisco in the Eduardo Núñez trade back in 2017, and he’s bloomed since then. The righty was just recently called up for his major-league debut and he’s made two solid starts for the Giants so far. This looks like a good find for the Red Sox, though the Giants likely deserve some development credit as well.

Losing Anderson certainly hurts, but the pain is eased at least a little bit because the next college pitcher taken is knocking on the door of the majors himself. Shawaryn saw his stock fall a bit as the draft approached, with some scouts scared he’d end up as a reliever. That’s still a concern, but he’s stuck as a starter to this point and is the highest upside depth option in the organization right now. He hasn’t gotten the call yet, but presumably he’ll get a chance at some point in 2019 and profiles as a potential back-end rotation arm moving forward.

The last two picks are less exciting than the first two, with Nogosek being somewhat intriguing when he was selected. The University of Oregon product was a pure reliever and the Red Sox kept him in that role upon being drafted. He’s another guy who was eventually dealt, though, heading to the Mets organization as part of the deal that brought Addison Reed to Boston. He’s up to Triple-A for New York right now, but he needs to find some control before getting up to the bigs. Gorst, meanwhile, signed above slot in the 12th round and is another pure reliever. He’s split time between Portland and Pawtucket so far this year.

The Red Sox went with a college arm with their first pick in 2017, hoping for a potential quick mover with big upside in the rotation and the floor of a good reliever. That was the big question around Houck coming out of the University of Missouri, as his pitching style looked more like a late-inning arm than a rotation workhorse, though he had the body to do the latter. The Red Sox tried shifting his approach when he first joined the organization, altering his mechanics a bit and trying to get him to focus more on the four-seam than the two-seam fastball. That plan was mostly ditched towards the end of 2018 and he’s looked better since going back to his college style, though that also makes it more likely he’ll end up as a reliever at the highest level. He’s still starting, though, and he’s in Double-A Portland to start 2019. He’s shown good flashes this year but has had a few rough starts mixed in as well.

Thompson fit a similar mold to that of Houck, albeit with a lower ceiling in both potential roles. He had a huge senior year for Oregon State leading up to this draft, and the Red Sox took his first full professional season to give him a legitimate chance at starting. He had an extremely rough time with an aggressive placement in High-A Salem, though, and he’s gone to the bullpen full-time. Thompson is currently on the injured list, but his fastball/slider combination is that of many modern relievers.

Finally, Schellenger was and is a pure reliever through and through. The Seton Hall closer was seen as a potential quick mover as long as he could stay healthy, though that had been an issue for him. It’s been an issue as a professional, too, as he barely pitched leading into 2019. Finally ready to go, he went to Portland this year but has had no semblance of control. Things have gotten so bad that he was just recently demoted back down to Salem to try and get back on track.

Feltman was not the most exciting prospect to be drafted in last year’s draft — you could make the argument he’s no higher than fourth — but he got the most buzz because he was the guy in the entire draft class with the best chance of appearing in the majors the same year he was drafted. The Red Sox weren’t that aggressive with the former TCU closer, but the right-handed reliever is as close to major-league ready as a recent draftee can be and is currently starting to heat up in Portland. He got a few looks in spring training and should be a part of this bullpen at some point late in the summer.

Ward was not a particularly exciting draft pick at the time, as he was not among any of the major rankings leading up to the draft. Still, he had a solid career at UCF splitting time between relief and the rotation, though the Red Sox made him a full-time starter as a pro. He didn’t pitch much after being drafted, but he’s been part of Greenville’s rotation and has opened eyes this year with a breakout performance. There’s not a huge ceiling here, but if all goes well there’s a chance he could stick as a back-end starter or a swingman on a good team.

The last two picks were not so exciting, with Brown in particular. The southpaw — the only left-handed college pitcher taken in the Dombrowksi era — was a senior sign taken out of NC State selected mostly to save money for the high school picks. His best-case is probably being a Kyle Hart type. Machamer was more exciting and signed for an above-slot deal, and he’s probably going to end up as a reliever. He’s in Greenville’s rotation to start this year, but has struggled.

There is a clear and obvious theme with all of these picks in that pretty much all of them were seen as at least potential relievers upon their selection. There was a fair number of early selections of pure relievers, too. Part of this is because it’s really hard to find surefire starting pitching prospects. They don’t grow on trees! It also, I think, points to the organization’s belief that finding and developing a high quantity of good relievers is an undervalued team-building mechanism. Look for them to take some college righties this year with big stuff but questions about either or both of their mechanics and secondary offerings.

Over The Monster https://www.overthemonster.com/2019/5/24/18638440/red-sox-draft-durbin-feltman-tanner-houck-mike-shawaryn-shaun-anderson
Categories: Sports