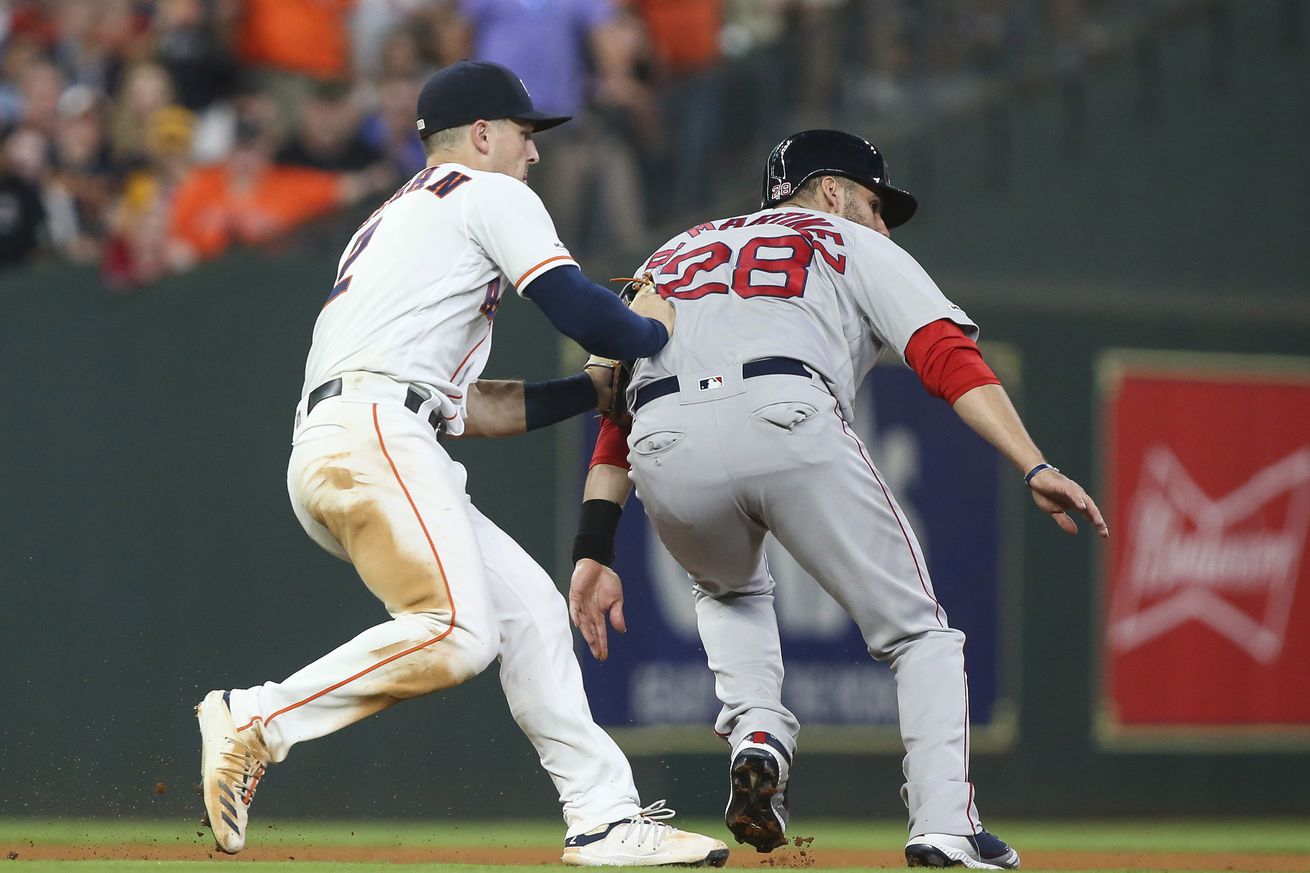 David Price left early, a billion runners left on and a rough night for Matt Barnes.

Well, if you like being extremely frustrated watching a baseball game, Saturday was the night for you. David Price started for the Red Sox, but he was apparently dealing with some flu-like symptoms and was pulled after recording just two outs. The bullpen, specifically Colten Brewer and Travis Lakins, did well in his stead, to be fair to them. Unfortuantely, the offense had a ton of chances early on that they failed to capitalize on while also being robbed of a run thanks to some weird ballpark quirks in Houston. As a result, Boston trailed most of the night before tying it up in the ninth, but even then they had runners on the corners with nobody out to try and take the lead and couldn’t do it. That would be big, because Matt Barnes had nothing in the ninth and allowed Houston to walk it off. A second straight brutal loss.

I don’t know if it would be fair to say the expectation coming into Saturday’s game was that a pitcher’s duel was coming to a television set near you. Both of these offenses are among the best and most talented in all of baseball, so there’s always a chance for a flood of runs from both sides. That said, David Price was going for the Red Sox and Brad Peacock was taking the ball for Houston. Both of those pitchers have been very good for the last few years — Price for longer than that, of course — and it was a possibility. As it turns out, it quickly became a reality. Based on the pitching matchup, as I said, it wasn’t a major surprise. What was surprising is that the Red Sox were able to keep up even after Price was forced out of the game with flu-like symptoms before the first inning even ended.

I suppose that’s where we have to start, too. Price did get two quick outs to start this game before allowing a single to Michael Brantley, but his stuff wasn’t quite there. Eventually, as I said, he was lifted from the game. On the FOX broadcast, Alex Cora said his pitcher had been battling a flu for four days now and hadn’t had the right preparation. With the way he was throwing, Cora couldn’t risk Price getting hurt because he didn’t have the proper strength behind him. That does beg the question of why he started in the first place with the knowledge that he had been sick, but that’s for another space. For now, we just stick with the fact that he was leaving with just two outs having been recorded and a runner at first.

Colten Brewer got the call first as Cora and the Red Sox now had to cobble together 8 1⁄3 innings from their bullpen. Brewer gave up a base hit to start, but eventually got a fly ball to end the inning and keep the game scoreless. He got into more trouble in the second, allowing back-to-back base hits to start that frame before getting a huge double play and a strikeout to escape the jam. He’d allow two more single in the third, but once again he did not allow any runs to score. Overall, it was a bend-but-don’t-break 2 1⁄3 innings from Brewer, as he allowed five hits but didn’t allow anyone to score.

Next up was Travis Lakins, who of course was just recently called back up to the majors when Tyler Thornburg was placed on the 10-day injured list. He was now being thrust into a tough spot, with the team asking for multiple innings against probably (definitely? maybe?) the best lineup in all of baseball. The rookie did a hell of a job, though, and it certainly helps that he has a starter’s repertoire, with health and stature issues being the reason he’s in the bullpen. Anyway, Lakins came out for the fourth and got a 1-2-3 inning on a trio of ground balls. He then got another perfect inning in the fifth.

With Brewer and Lakins pitching so well, this was a game that would certainly hurt if the Red Sox did not pull it out, but the pitching is only half the battle. They needed to hit, too, but they ran into a tough pitcher in Peacock as well as some bad luck and, of course, missed opportunities. For example, they got a leadoff walk (and eventually a stolen base) in the first inning from Andrew Benintendi, but then the next three batters failed to even put the ball in play as three strikeouts finished off the inning.

The second inning is where that bad luck started to come into play, and it was Rafael Devers on the other end of it. It looked as if the Red Sox third baseman was keeping his hot streak going with another homer, as he blasted a high fly ball out to right field. Unfortunately, it was too high and it hit part of the roof and bounced back into play. It did get to the ground and Devers did get a double, but it appeared as though it should have been a homer. It was frustrating, but ultimately the Red Sox still had a guy at second with no outs and you have to get past the dumb ballpark stuff and take advantage. Instead, Michael Chavis, Jackie Bradley Jr. and Christian Vázquez all went down and the runner was stranded, leaving the game scoreless.

As we rolled along to the third inning, the Red Sox had yet another chance against Peacock. This time it was Benintendi starting it again with a one-out double before a base hit moved him up to third. With runners on the corners, one out and the middle of the order coming up, this was the time to score. Instead, Xander Bogaerts and Mitch Moreland both struck out for the second time in the game, and yet another opportunity was squandered.

From there, Peacock settled down a bit and the Red Sox struggled to get those scoring chances again. They’d get a leadoff single in the fourth but nothing else before going down in order in each of the next two innings.

So, despite the strong, unexpected work from the bullpen the score was still stuck at zeros heading into the bottom of the sixth with Lakins coming back out. He had been perfect in his first two innings, but the Astros finally got to him in this inning. The Red Sox righty got a quick first out before issuing a walk and a line drive single. That brought old friend Josh Reddick to the plate, and he came through with either team’s first big hit of a day, putting a single through the right side to score the first run of the day.

That’d be the end of the day for Lakins, with Heath Hembree coming into the game with runners on the corners and just one out. Tyler White was the first batter he’d see, and on the first pitch the Astros DH poked a little bloop out in shallow center field that just barely snuck over the glove of Chavis. That gave Houston a 2-0 lead, which would remain the score at the end of the inning.

Now, the Red Sox offense had to find a way to get some rallies going and finish them off against a good Astros bullpen. Héctor Rondón was the first man up for Houston, and Chavis was able to start that inning with a leadoff single. The Red Sox would get two quick outs after that, though, before J.D. Martinez came on to pinch hit for Sandy León a the team forfeited the DH in the process. (Vázquez was the DH, but he’d have to come in to catch now.) He couldn’t do big damage, but he did keep the inning going with a walk. Houston then turned to Ryan Pressly with Benintendi coming to the plate. Finally, the Red Sox got a hit when they needed one as Benintendi smacked a single on the first pitch he saw, cutting the deficit down to one with Betts coming up and two on. It was a great chance at a rally, but it was killed as only the Red Sox can do. The first pitch scampered away from the catcher, but not too much. However, Benintendi was still caught too far off the base and Martinez was eventually cut down to end the inning. It was….terrible.

Hector Velázquez then came on for the bottom half of the seventh in a bizarre decision from Cora in a one-run game with the 9-1-2 hitters due up, and the righty immediately gave up a leadoff double to Aledmys Díaz. He’d then walk the next batter he faced to put the two leadoff men on. It looked like he got a big double play after that, but Chavis didn’t put enough on his flip to second base so only one out was recorded. Velázquez came back with a huge strikeout against Carlos Correa, but then Yuli Gurriel ripped one to the right side. It deflected off of Moreland all the way to Bogaerts, but not with quite enough time to make the out. That gave Houston their run back, and it would be 3-1 Houston after seven.

Pressly then came back out for the eighth and got a 1-2-3 inning. After Velázquez did the same in the bottom of the inning, Boston had one more chance to get two runs off closer Roberto Osuna in the ninth. They did get things started with a base hit from Devers, and then Chavis got an infield single to put the first two batters on. That brought Bradley to the plate, and he was hit by the first pitch he saw and suddenly the bases were loaded with nobody out for Vázquez. The catcher came through, ripping a base hit down the third base line to score two and tie this game right up. Steve Pearce then came up as a pinch hitter with the runners on the corners and still nobody out, but he struck out. Benintendi came up next, but he popped out to third base, leaving it up to Betts to get that go-ahead run across. He didn’t do that, but he did extend the inning with a walk to load the bases with two outs for Moreland. He couldn’t come through, grounding out back to Osuna to leave three more on and settle for the tie.

So, with a new game in hand it was Matt Barnes coming up to face the top of Houston’s order. Things did not start well, as Díaz led off with a double through the left side into the corner in left field. That was followed by a walk from Alex Bregman, and trouble was brewing. Barnes continued to struggle with his control, walking another batter to load the bases with nobody out. Correa then poked a single into right field, scoring the winning run and sending the Red Sox home with another extremely tough loss.

So, the Red Sox and Astros will be back in action on Sunday as Boston tries to avoid a sweep in Houston. Eduardo Rodriguez will pitch for the Sox while Justin Verlander takes the mound for the ‘Stros. First pitch is scheduled for 2:10 PM ET.

Over The Monster https://www.overthemonster.com/2019/5/25/18640125/red-sox-astros-david-price-flu-injury-matt-barnes-roberto-osuna-christian-vazquez
Categories: Sports