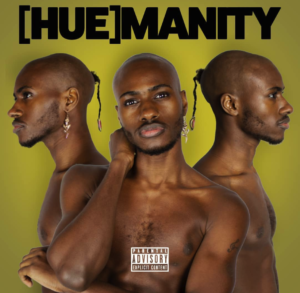 Boston native Karim’s debut EP Huemanity is a prelude to an emotional journey, one that tugs at the frayed edges of Blackness, queerness, and consciousness to assume the form of unraveled joy. The 5-track EP comes and goes quickly, the musical equivalent of the first moments of the morning when the splendor of dreams has not yet faded into wakefulness. In that brief amount of time, Karim succeeds in delivering his vocal and lyrical competency and provides a few earworms along the way. The general vibe is such that Huemanity will make you nostalgic for feelings you haven’t felt yet.

Huemanity begins with a series of questions: “What does it mean to be human? To be in this body? To be in this flesh?” The first track “Intro”, an accompanied spoken word piece featuring performer and author Capella Auriga, sets the frame for Huemanity’s aim as not only a musical work, but an identity work. She continues: “Brown is the color, or so I’ve been taught to believe… Let me take you on a journey to freedom.” After the past two years of burnout from anti-fascist direct action and memes about Harriet Tubman bringing slaves #TOFREEDOM, it is now so expected for (queer) people of color to encumber their work with social critique that it no longer registers as brave or outlandish when they do. This goes on despite the pain and isolation we feel in trying to even put a name to our experiences, let alone articulate them in a way that is artistically sound or commercially viable. What Huemanity does successfully is push back on what a listener or eavesdropper might expect, but in a way that actually pushes thought and music forward.

Karim’s biggest strength as a lyricist is in writing hooks. Second track “Daydream” is a minimalist yet warm track that elucidates the ephemeral feeling of adoration. The hook is simple, yet effective: “This is what a daydream feels like~” I’m not lying when I tell you that I was singing along to that hook before the chorus even finished. Third track “Lullabies” has an equally infectious hook that doesn’t seem to match its somewhat arrhythmic and lo-fi composition. That said, you best believe I’ve had “Spare me the lullabies / Spare me the goodbyes / I just need good vibes” on an endless 8-count phrase repeating in my head since my first listen. Karim could definitely benefit from tapping into the remix-industrial complex and transforming some of his most thoughtful songs into playlist-ready bops. That said, the emotional impact of each subsequent song is hardly lost along the way, with flawless production handled jointly by Karim and James “Tropicana Bwoy” Alcott.

Huemanity’s tracks have unintuitive lengths. Three tracks are under 3 minutes in length, while “Internal” clocks in at over eight. I felt that especially on “Lullabies” and (ending) title track “Huemanity”, the content and composition of the songs was so powerful that the end of the song felt abrupt, perhaps unfinished. I questioned myself: is something really missing, or is it so good that I just want MORE? The apex of the EP, “Internal”, is a proper trip-hop screed that does manage to keep the listener entertained for all eight minutes; also, a track which Karim has performed in its entirety in previous appearances at Dorchester Art Project. From a conceptual point of view, songs which defy genre standards of length and structure are themselves bucking trends that have to do with formulaic, profit-driven commercial music, which I interpret as a form of anti-capitalist critique. That said, if Karim did choose to write and perform a rhythmic or otherwise pop-influenced song with a more typical composition, I have no doubt that he would absolutely knock it out of the park.

In that way, Karim’s first course offering is inherently contradictory yet potent and fertile. Comparisons to iconoclasts like Björk and Massive Attack (even Basquiat) and contemporary indie goth darling serpentwithfeet are easily made even with this glimpse into Karim’s artistry. Somehow, though, it feels like the choices made in composing Huemanity are not at all rookie mistakes, but the product of a cerebral intentionality and commitment to a concept that may very well go over the listener’s head even while sounding revolutionary. Overall, Huemanity deserves at least two listens. At the same time, I look forward to what Karim has for us next — and whatever form that projects, I hope we get to see and hear Karim have some fun too.

Be sure to catch Karim’s next show at the Hot Haus Fundraiser, June 2 at Warehouse XI in Somerville (Facebook).

Huemanity is now available for streaming on all major platforms. Follow Karim on IG @just_karim_ for updates.

Hassan Ghanny is a writer, performer, and music journalist based in Boston, MA. His work focuses on the intersections of media, culture, and identity with an intention to uplift people of color and people in diasporas. He is a regular writer for Boston Hassle and performs regularly around Boston. He can be found on Instagram @diaspora.gothic