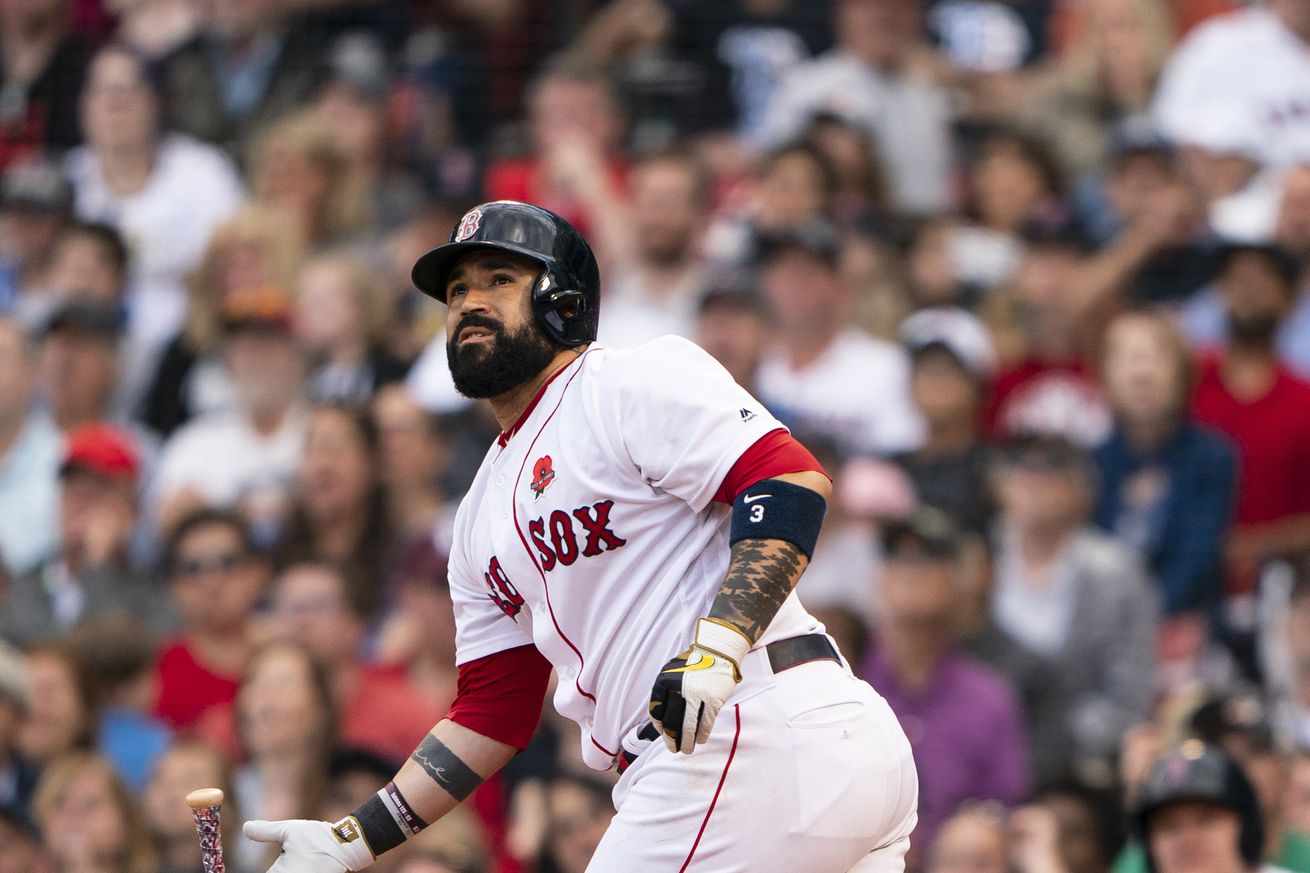 On an eventful day for the Red Sox, they pull out a relatively easy win.

Coming off a disappointing and hard-fought series down in Houston, the Red Sox were looking to get back on track and find some easy victories against a good, but struggling, Indians team. Early on things were looking rough, with the Indians jumping out to a quick lead against Rick Porcello and the Red Sox offense struggling to get much going against Jefry Rodriguez. That changed in a heartbeat and a huge fifth inning capped off by a Sandy León three-run homer put the game firmly in the Red Sox court. Porcello did settle down a bit as the game went on, but was mostly bend-but-don’t break in this start. Later in the game, J.D. Martinez smashed a couple of home runs to give the Red Sox an even wider margin. This is how they drew it up, to put it more simply.

Monday was an eventful day in the world of the Red Sox, from the sad news of Bill Buckner’s passing to Dustin Pedroia’s press conference in which he said he wasn’t sure he’d ever play baseball again to the happier news of Brock Holt’s return. Still, after all of that, there was a baseball game to be played. Rick Porcello was on the mound for the Red Sox looking to carry he momentum from his recent starts in which he has looked much improved after his disastrous start to the season.

Things did not get off to that kind of start, though, and Porcello found himself in trouble in the blink of an eye to start off this game, and this series, against the Indians. It was Francisco Lindor starting things off right away with a base hit smashed through the left side before Oscar Mercado rocketed a ball towards Xander Bogaerts at shortstop. It was a potential double play ball, but it sort of short-hopped Bogaerts and got by him, resulting in a tough error — it was the right call, but certainly not an easy play — and runners on the corners with nobody out. Porcello did follow that up with a big strikeout against Carlos Santana, but then Jason Kipnis gave Cleveland another base hit to score a run and give Cleveland the lead. After Jake Bauers was hit in the foot with a pitch to load the bases, Roberto Pérez hit a weak ground ball that resulted in an out but also another run. At the end of the inning, Cleveland had a 2-0 lead that all came on singles, but with plenty of hard contact, too.

The righty came back with a 1-2-3 second, but then got into more trouble in the third. There, it was Mercado getting involved again, this time with a leadoff single. The rookie quickly followed that up with a stolen base to get into scoring position, and after Santana drew a walk Kipnis dropped a weirdly-timed sacrifice bunt to move both runners into scoring position. Bauers then grounded out to second base to knock in the third run of the day for Cleveland, but Porcello was able to get out of it from there, thanks in part to the free out courtesy of Kipnis.

The Indians had a few more chances in the next couple of innings, too. In the fourth, they got a leadoff single followed by another sacrifice bunt — this is not the Terry Francona I know! Lindor would eventually come up again and get intentionally walked before Mercado drew a walk of his own for his third time on base of the day and loading the bases for Cleveland. Santana couldn’t come through, though, and the bases were left full. In the fifth, meanwhile, they got a one-out double from Bauers but nothing more thanks to great defensive plays from Mookie Betts and Brock Holt.

Meanwhile, the Red Sox offense was trending the opposite way against the young Jefry Rodriguez. They went down very quietly in order in the first inning before managing only a single in the second. The third would finally start to bring the offense out, however, and they kept going from there. That rally was of the two-out variety and started with a walk from Andrew Benintendi. The outfielder then stole second base before Betts drove him in with a base hit. Betts also got some help from Mercado as the latter misplayed the ball in right field, allowing the ball to get by him and for Betts to get all the way over to third. That would be big, because Rodriguez threw a wild pitch in the next inning to allow Betts to score and for Boston to cut their deficit down to one.

With the score still 3-2 heading into the bottom of the fourth, Bogaerts got that inning started with a base hit before Chavis got a single of his own. The former made an aggressive attempt to get to third on that play and made it, allowing the latter to get to second on the throw. Brock Holt then tied the game up with a single. Boston did get the bases loaded with just one out, but couldn’t get any more runs across and settled for the 3-3 game.

In the fifth, however, that would change significantly and in a hurry. Rodriguez was still in the game to start that inning and Betts rocketed a single off the Monster before getting to second on a balk that everyone seemed to miss. Rafael Devers then came up next and stayed red-hot with a double out to center field on a possible misread by Leonys Martín, and the Red Sox had the lead. Devers would then come around to score on a double from Bogaerts, who later came in to score on a double from Jackie Bradley Jr. That brought Sandy León to the plate with two on and two out, and the catcher smashed his second homer of the year out to left field, and just like that it was a commanding 9-3 lead for the Sox.

The Red Sox would get another run on top of that on a home run from J.D. Martinez that bounced off the wall back into play but then off Mercado’s glove and over the fence. It was weird!

On the other end, Rick Porcello came out for a 1-2-3 sixth before getting into more trouble in the seventh. He did have a 10-3 lead at this point, but he would allow a leadoff base hit before a one-out double to put runners on the corners. After a big strikeout for out number two, Porcello gave up a base hit to give Cleveland their fourth run of the day, and that ended his day. Heath Hembree came in after that and immediately gave up an RBI double to make it 10-5 before the inning ended on a very deep fly ball to center field.

After the Red Sox added one more in the seventh to get the lead back to six, Ryan Brasier came on for a 1-2-3 eighth. Hector Velázquez then came on for the ninth and tossed a perfect inning of his own to end this game.

The Red Sox and Indians will play the second game of this three-game set on Tuesday night with David Price taking the mound for Boston to take on Zach Plesac for the Indians. First pitch is scheduled for 7:10 PM ET.

Over The Monster https://www.overthemonster.com/2019/5/27/18641842/red-sox-indians-rick-porcello-jd-martinez-sandy-leon-jackie-bradley-jr-michael-chavis
Categories: Sports