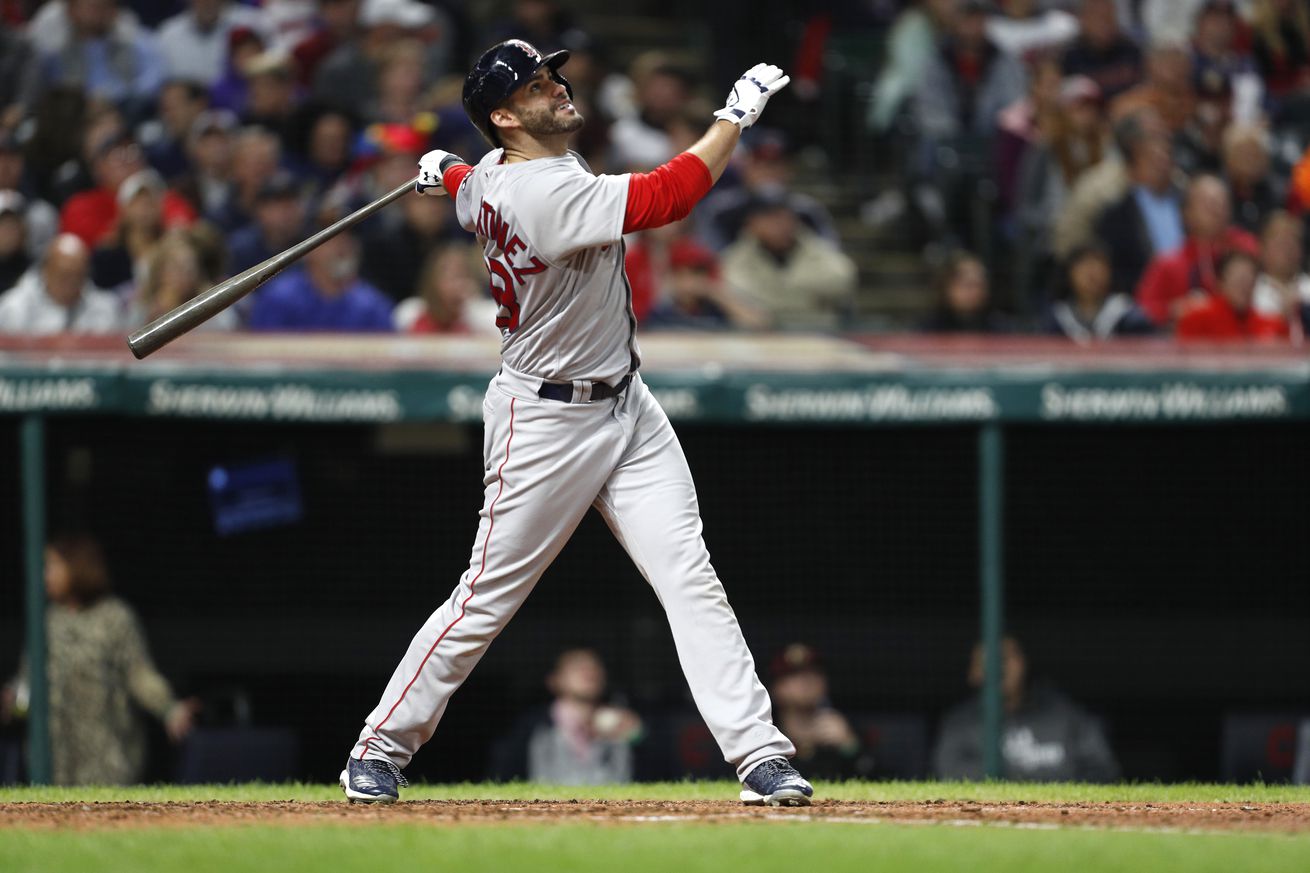 A look at the upcoming three-game set at Fenway.

After a justifiably criticized offseason with a lack of activity, the Indians have been one of the more disappointing teams in baseball so far this year and are already ten games back in their division.

Down. It’s been a disappointing season pretty much all year for the Indians, but things have been particularly bad of late. They just finished up dropping three of four to Tampa Bay that was immediately preceded by a three-game sweep at the hands of the A’s. Overall they have won just one of their last six series, and that one came against the Orioles.

The Red Sox will start this series against Cleveland with their hottest starting pitcher on the mound, as Porcello has come a long way since his brutal start to the year. Over his last six outings he’s gone at least six innings and has allowed three or fewer runs in five of them, and he allowed four in 6 2⁄3 innings in the one outing where he didn’t meet that criteria. He’s coming off a particularly impressive day in his last outing, allowing just one run over six innings on just three hits with not walks. The key for Porcello has been his control. He struggled to throw strikes early in the year but he has issued just two walks so far in four outings in the month of May. He faced Cleveland twice last year, allowing nine runs (eight earned) over 12 innings with seven strikeouts and three walks.

Rodríguez was part of the return that came from Washington in the deal that sent Yan Gomes to the Nationals, and after a few starts in the minors to start this year he’s been in Cleveland’s rotation. The 25-year-old righty has made six starts so far this year and he’s struggled a bit, with a 4.08 ERA, a 4.70 FIP and a 6.25 DRA. Those numbers are actually a step up compared to last year in Washington, too. When Rodríguez is at his best he’s getting ground balls and limiting hard contact, as he doesn’t miss many bats and allows a few more walks than one would like. If the Red Sox are getting the ball into the air, they should be able to have success in this one. This year the young righty has featured two mid-90s fastballs along with a curveball and the occasional changeup.

Technically, according to the Red Sox website, there is no official starter named for Tuesday night’s matchup. Presumably, though, it is going to be Ryan Weber getting this start again. There is no reason to believe he wouldn’t get another chance here after the righty impressed so thoroughly in his last outing against the Blue Jays. Weber’s command was incredible in his first start in a few years, with his two-seamer painting corners all night long. We probably can’t really expect him to do the same in this outing, as expecting six one-run innings every time out is unrealistic, but if he can go five strong in this spot in the rotation that is a huge boost for this team.

The Red Sox and fans at Fenway will be seeing a major-league debut with Plesac set to get the nod for the second game of this series. A former 12th round pick, the 24-year-old righty hasn’t gotten the prospect accolades but has pitched very well in the minors. He spent much of this year at Double-A, pitching to a 0.96 ERA over six starts with a sub-2.00 FIP as well. He then got promoted to Triple-A with a 2.25 ERA over three outings. He’s had solid strikeout numbers in the minors throughout his career, though it’s the control that really makes him succeed. It seems he’ll be throwing strikes, so the Red Sox should be looking to attack in this game. He is going to show a fastball, a pair of breaking balls and a changeup. He is indeed the son of Dan Plesac.

Sale is coming off a start against Houston that was….fine. Friday’s game on the road against the Astros was certainly more notable for the terrible defense behind him, and that certainly did him no favors. However, the Red Sox ace did give up plenty of hard contact in that game as well, though he also got much better as the day went along. Even with that, he allowed only four runs (two earned) over six innings, so it’s not as if he blew up or anything. Each of his last two starts has come against that tough Houston lineup, so he should feel good about facing anyone else even if Cleveland does have some talent in there’s. Sale faced Cleveland once last year in September when he was building himself up following his injury, striking out seven and allowing two runs over just 3 1⁄3 innings.

Bieber emerged last year with a quietly strong season and was a very popular pick to breakout for the Indians in 2019. So far, that is exactly what has happened. The 23-year-old has pitched 11 times for Cleveland (10 starts and one relief appearance) and he’s pitched to a 3.11 ERA with a 3.51 FIP and a 4.19 DRA. His strikeout stuff is the calling card here, as he’s currently setting down over 11 batters per nine innings so far this year. He has watched his control fall off a bit, though it’s still solid, and he’s allowed a few more homers this year as well. He’s coming off a solid start against Tampa with ten strikeouts in five innings, and two starts ago he had a compete game shutout with 15 strikeouts and no walks. This will be a test for the Red Sox, who did see him twice last year and scored nine runs in 11 innings. Bieber is going to feature a fastball that sits in the 93-95 range with a slider and a curveball.

Terry Francona is the most famous old friend on this Cleveland roster, as the former championship-winning Red Sox manager has been in charge for the Indians since the 2013 season. As has to be mentioned every time the Red Sox meet up with Francona, the way he was treated by ownership publicly and through leaks on his way out the door was an embarrassment for the organization.

Josh D. Smith is in Cleveland’s bullpen and does not play a huge role. This is a reminder that, last year, the PawSox featured two Josh Smiths on their pitching staff.

Francisco Lindor is not really having a Francisco Lindor-like season quite yet after missing the start of the season with injury. His overall line is just a bit better than league-average right now with his power down some and his walk rate down from its typical range. Lindor is one of the best overall players in the game, though, so it’s only a matter of time before he turns it around.

José Ramírez has been an MVP candidate in each of the last two years, but in 2019 he’s been among the most disappointing players in all of baseball. He’s still walking a bunch and is making plenty of contact, but his quality of contact has been totally non-existent. After two straight big power years he’s putting up an Isolated Power of just .100 this year with a batting average balls in play all the way down to .221.

Carlos Santana has easily been Cleveland’s best hitter this year in his second stint with the organization. He’s walking more than he strikes out while also hitting for power in the middle of their lineup.

Jason Kipnis is suffering from similar issues as Ramirez where his plate discipline is where it’s always been but he’s struggling to hit the ball with authority.

Jake Bauers is a former Rays prospect who is getting a chance to play every day this year and is walking a bunch but not hitting for power and striking out more than you’d like.

That Leonys Martín is even playing after scary health issues last year is amazing. He’s been the everyday center fielder for Cleveland this year, though he’s struggling with strikeouts so far in 2019.

Oscar Mercado was just recently called up to help Cleveland’s outfield and he’s been about average in a very small sample size.

Jordan Luplow strikes out a lot but he’s been able to make up for that in a part-time role with big power.

Roberto Pérez is another guy with a high strikeout rate but he also walks a ton and hits for solid power, particularly for a catcher.

Brad Hand is the top reliever in Cleveland’s bullpen and is having a bit year with a 1.29 ERA and a 1.82 FIP. He does have a much less impressive 4.14 DRA, though, likely due in part to the fact that his ground ball rate is just 14 percent, meaning he’s vulnerable to home run issues at times. It hasn’t affected him yet this year.

Nick Wittgren and Adam Cimber are the top right-handed setup arms in the Indians bullpen. The former has been great with 10 strikeouts to just one walk in 17 2⁄3 innings this year while the latter has been more good than great as a guy who relies on grounders and weak contact.

Oliver Pérez is still in the league and still a good left-handed option in relief. He gets a bunch of strikeouts, but this year he’s been hurt a bit by the long ball.

Corey Kluber had his cast removed last week after being hit in the wrist by a line drive earlier in the year. He’s still a long way away from returning, though.

Mike Clevinger went down with a back injury after just two starts this year, but he’s starting to work his way back and could return in the next three or four weeks.

Bradley Zimmer should be just about ready to start a rehab assignment and will likely return shortly after this series is over.

Danny Salazar is dealing with a significant shoulder injury but he hopes to pitch at some point this year.

Tyler Naquin is dealing with both a calf injury and a knee injury right now and doesn’t have a clear timetable on his return.

The weather is going to cool off considerably after the last couple of days, but there shoudn’t be much danger of missed games or delays. There is some rain in the forecast off-and-on for Tuesday, but right now it looks like it should be clear during the game.

Over The Monster https://www.overthemonster.com/2019/5/27/18640860/boston-red-sox-cleveland-indians-series-preview
Categories: Sports