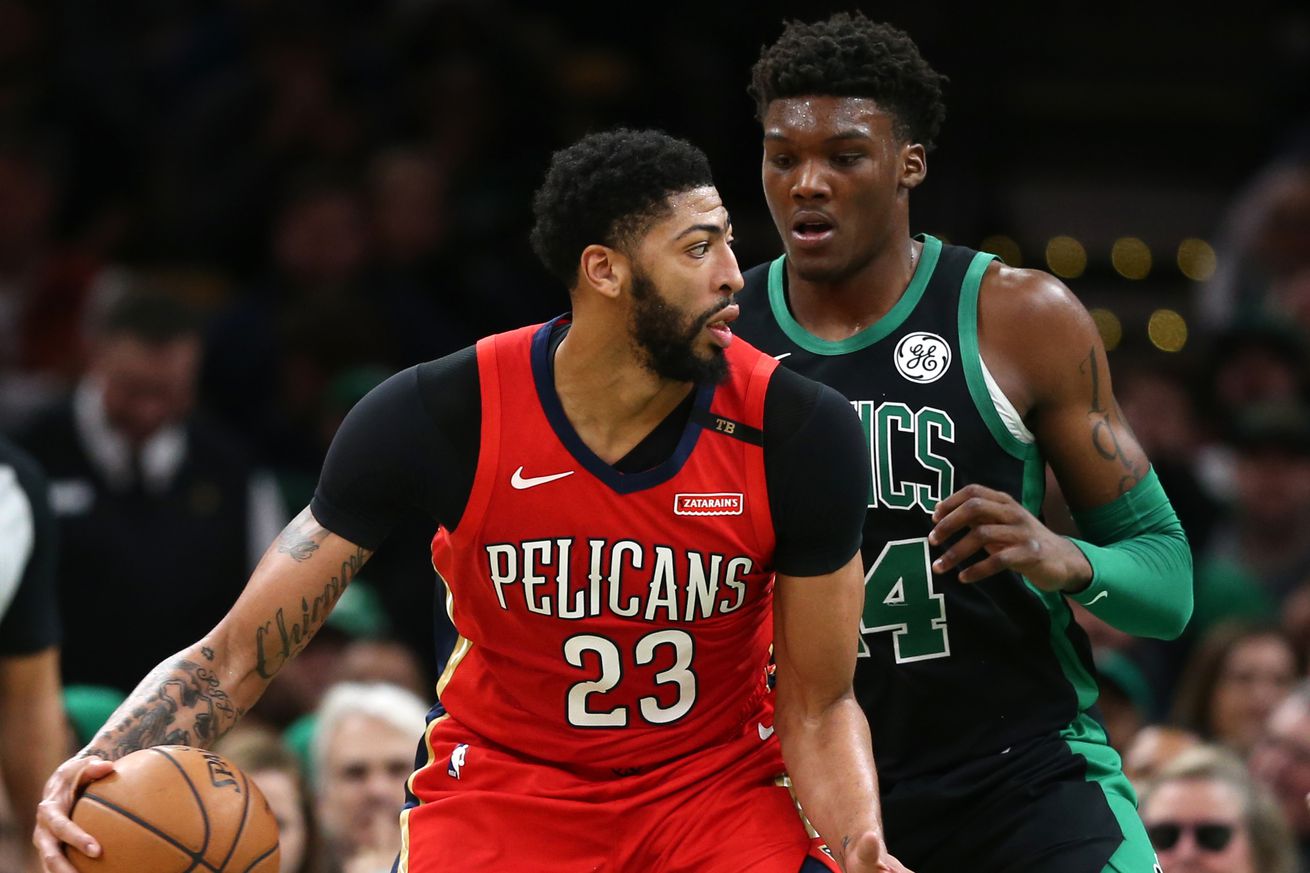 What were the best individual performances for each member of the Boston Celtics this season?

The Boston Celtics’ season is over and the NBA Finals haven’t yet begun, which means we’re facing a slight lull in tangible basketball to discuss (unless you’re following the WNBA which you should be). It’s as good a time as any to look back on some of the high points of the Celtics season that was. We’re going to take a look at the best individual performances for every player who appeared on the Celtics’ roster this season.

We’ll start from the back end of the bench today, in order of total minutes played. Keep an eye out for part two later this week, in which we’ll discuss the starters and more crucial rotation players.

Gibson signed with the Celtics for the regular season finale against Washington, but unfortunately, did not appear in the game. At least we’ll always have his performance in Game 82 from last season.

In case you’d forgotten, Greg Moose did in fact spend a 10-day contract with the Celtics this season, the middle stop in his tour of the Atlantic division before he settled with the Philadelphia 76ers for the rest of the year.

He only appeared in two games, however, and since this was the longer appearance of the two (by two whole minutes!), it pretty much wins by default.

Jonathan Gibson may not have gotten his “Game 82” moment, but R.J. Hunter sure did. Locked into the four-seed heading into the season’s final game, the Celtics did the sensible thing and rested most of their regular rotation, setting up a bizarre contest against a Wizards team with little to play for. This created an opportunity for a number of Boston’s deeper bench players, which we’ll see reflected in the next few entries on this list, too.

Nobody took greater advantage than Hunter, who, in his only game action of the season, let it fly with impunity from behind the arc. Hunter attempted 10 total threes, making four, and caught on fire in the fourth quarter with four buckets that helped push the Celtics ahead. It was an undeniably emotional performance for Hunter, who had rejoined the team on a two-way contract this season after having been released by the Celtics back in 2016.

“It was a good game,” said Hunter. “I just kept a good mindset. I had a lot of fun out there tonight, to be honest.”

As one of Boston’s two-way players, Dozier spent most of the season with the Maine Red Claws and saw just 51 minutes across six appearances with the Celtics. As with Hunter, his number was called in the season finale, and he produced far and away the best performance of his brief NBA season.

Against the Wizards, Dozier saw a whopping 37 minutes, and while he wasn’t particularly efficient as a shooter, he was effective just about everywhere else. He snagged four offensive rebounds, dished five assists and finished the game as a +10. “I thought PJ was great. I thought he stabilized us in the first half when we weren’t very good at the start of the game,” said Stevens.

I wrote about Yabusele in greater depth this weekend, but the long and short of it is that there just weren’t many opportunities for him to contribute to this Celtics team. Between the team’s extensive front court depth and their title aspirations, the still-raw 22-year-old just didn’t have a role to play this season.

Thus, like several others this far down on the bench, Yabusele’s best game came against the Wizards in Game 82. To be fair, he played quite well against what was predominantly Washington’s normal rotation; he logged a season-high 25 minutes and splashed a trio of three-pointers from a few steps behind the line.

This was a redshirt season for the Timelord, by and large, as the fully healthy Celtics roster didn’t really have a readily available front court role for the 20-year-old rookie. However, early-season injuries to Al Horford and Aron Baynes created a short stretch of opportunity for the Texas A&M product. Williams played roughly one-third of his NBA minutes for the season in a seven-game stretch from December 10 to December 23, blocking 19 shots and winning the hearts of Celtics fans along the way.

The first of these games was the most tantalizing, as Williams saw his first significant NBA action against Anthony Davis and the New Orleans Pelicans and more than held his own. Williams held court in the paint for much of the night, grabbing 11 boards and blocking three shots (two of which came on Davis). While Davis may have scored 41 points, he had to work for it — it took him 34 shots to get there. For a rookie playing his first substantial minutes, it’s hard to ask for much more than that.

I was — and still am — of the mindset that Brad Wanamaker deserved a greater opportunity to contribute to competitive basketball for the Celtics this season, similar to how Shane Larkin did last year. Though mostly healthy seasons for Irving and Smart seemingly precluded him from significant minutes, we saw enough flashes from Wanamaker that I think there was arguably a role to be found for him somewhere.

I could be boring and choose the Washington game once again here — Wanamaker scored a season-high 17 points — but honestly, you’re probably as tired of hearing about that game as I am of talking about it. Instead, we’re going with January’s tilt against Cleveland, a 20-point Boston blowout powered by a colossal 38-point second quarter. The Celtics played this one without Irving, which created an opportunity for Wanamaker to show off what he brings to the table — reliable, mistake-free offense with a nice perimeter shot.

Considering Terry Rozier’s difficulty adapting to his reduced role off the bench and the issues it caused the second unit, Wanamaker’s reliability probably deserved more of a chance.

Like others on this list, Ojeleye was a player who arguably deserved more time on an NBA court this season, but the Celtics just couldn’t accommodate him. He may have actually been the Celtics’ most improved player; after a rookie season in which he was one of the worst players in the entire league, he was better in just about every phase of the game as a sophomore. This team simply had too many wings with Hayward back on board, and Ojeleye ended up becoming the odd man out.

Ojeleye also had a big performance in Game 82, scoring a career-high 17 points, but for once, it actually wasn’t his best overall performances of the season. He actually struggled with his shot a little bit — he shot just 2-of-7 from behind the arc — and seemed a little miscast as one of the team’s top offensive options after Rozier and Jaylen Brown were done for the night.

Instead, Ojeleye’s best performance came in one of the most dominant games in franchise history: December’s 56-point decimation of the Chicago Bulls. Seeing most of his minutes in the fourth quarter, Ojeleye help anchor one of the most dominant quarters of the season, outscoring the Bulls 40-17. During that stretch, he showcased the myriad ways he improved this season: he shot the ball confidently (an issue for him last year), rampaged his way to the rim a few times, finished an alley-oop and even attempted a couple step-back jumpers.

Statistically, this wasn’t as big of a season for Baynes as his first year in Boston. Minutes were just a little more thin in the front court with the fully healthy roster together, and he struggled through nagging injuries that held him to just 51 games during the regular season.

Still, Baynes remained quietly essential to the Boston Celtics in 2018-19. The defense simply wasn’t the same without his physical presence on the court; his 101.4 defensive rating ranked best on the team, and that mark ballooned to 106.8 when he sat. He was willing as ever to put himself on a poster if it gave him a chance to prevent a dunk, and his improved three-point shooting from last postseason even carried over to this year — he hit 34% of his shots from deep.

The best example of Baynes’ impact came one of the most important regular season games of the season: the first of two late-season match up against the Indiana Pacers that essentially sealed the four-seed for Boston. Baynes feasted on Indiana’s deep front court in both match ups, locking down the paint and recording double-doubles in both games.

The latter game may have been slightly flashier in the box score, but his presence was felt more subtly in the former: Pacers center Myles Turner shot just 2-of-6 inside the three-point arc, and the normally prolific Pacers front court was held to just 40 points in the paint. Baynes finished the night as a +4 in a two-point Celtic win, in a game where the entire Boston bench finished in the negatives.

It wouldn’t be a Celtics season without a couple random Theis explosions, and the 2018-19 campaign brought us a pair of quality ones: a 22-point game in the Chicago blowout in December and this mega-efficient performance against the Lakers in Boston. You might remember it as “The Rajon Rondo Buzzer-Beater” game.

Theis is a match up dependent player. He’s undersized for a center, and tends to struggle against stronger centers. He’s also sort of a “tapper” on the glass, preferring to deflect rebounds out to his teammates rather than grab them securely in some situations. This can get understandably frustrating, especially as Baynes missed substantial time this season and forced Theis onto the court in situations that didn’t benefit him.

Well, this year’s Lakers were one of his ideal marks. Their best bigs this season were JaVale McGee (mostly just a one-dimensional rim-runner) and Tyson Chandler (athletically limited due to his age). Against both, Theis’ mobility was able to thrive, and he diced the Lakers’ defense to pieces off the pick-and-roll and pick-and-pop. He hit both of his three-point attempts — he made 26 of his 67 attempts from deep this season — and most of his contributions came in the third and fourth quarters, where he was invaluable in keeping the Celtics within striking distance — sometimes almost single-handedly.

If Theis elects to stay in the NBA this off-season, this is the game his agent should be showing teams in free agency. Versatility, pick-and-roll proficiency and floor spacing are always in demand, and Theis would be a good fit on basically any bench in the league.