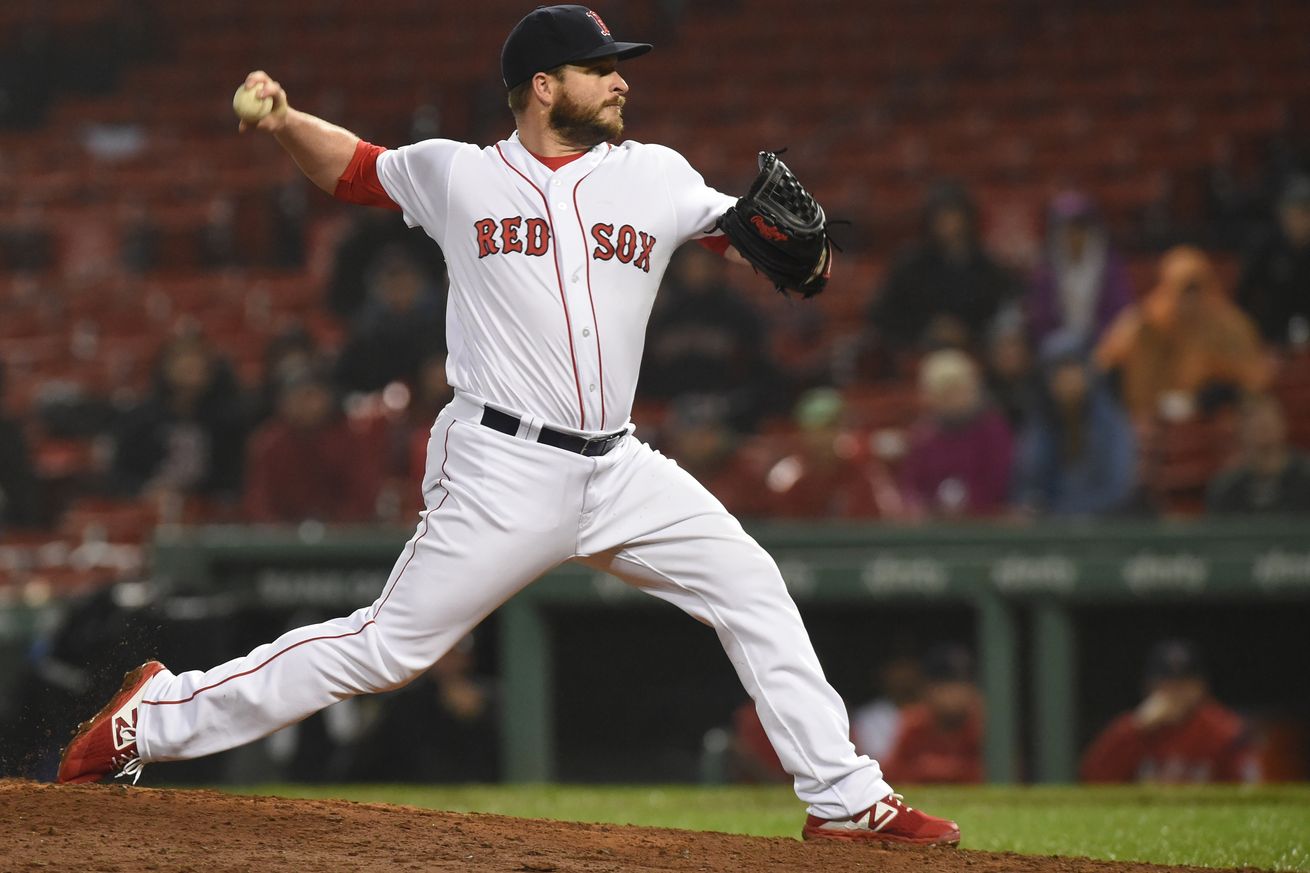 Ryan Brasier, Travis Lakins and Marcus Walden all have tough days in a blown effort.

The biggest issue for the Red Sox all season long was the bullpen. Everyone knew this, and even if you were against them making a big-money signing for someone like Craig Kimbrel you likely wanted them to do something to address the issue. In fairness, the performance from the relievers has been mostly good this year, but it’s always felt like a tightrope walk. It’s Matt Barnes and the rest, and on Tuesday “the rest” failed them. David Price was phenomenal despite being interrupted for an hour by rain, and the offense turned it on late after being shut down by Zach Plesac in his MLB debut. It would have been nice for the lineup to do more earlier, but five runs should have been enough. Marcus Walden struggled in the eighth, though, meaning Barnes had to be called in then, leaving the ninth open for Ryan Brasier. He would allow three runs in three batters before Travis Lakins allowed two more, and a three-run lead turned to a five-run deficit. It was ugly, is what I’m trying to say.

This game got underway right on time, which was a major surprise given the rain in the area as we got closer to first pitch. It was especially surprising considering the rain in the area while they started playing. David Price took the mound for this game to start on schedule despite heavy rain coming down forming puddles on the tracks and coating the infield with moisture. It was to the point where it was distracting just trying to figure out why they were even playing. But, they did, and Price had to come out with the rain coming down after his last start was halted by the flu.

To his credit, even with the rain coming down Price got the job done, albeit with a little help from the umpire behind the plate. It seemed no one wanted to be standing out there, and that allowed the zone to grow pretty large in those first couple innings. The Red Sox lefty tossed two innings in the rain and allowed just a single in that time.

Meanwhile, the Red Sox offense was going up against Zach Plesac, who was making his major-league debut. It was a great opportunity for them to continue their hot streak from the day before when they scored 12 runs, but it was also a trap waiting to happen. We all know this lineup has a tendency to falter against pitchers it seems they should crush, and Plesac fit that mold. He only tossed one inning with the rain coming down, and the Red Sox went down in order.

Before they could come out for another inning at the plate, the umps finally called for the tarp to be put on the field. The delay would last about an hour, but things didn’t get much better for the Red Sox offense as Plesac ended up shutting them down under the rain and under the clearer skies. That second inning did provide the lineup a chance to get some runs on the board, though, when J.D. Martinez started the inning with a double out to center field and Brock Holt came up later with a one-out infield single. That put runners on the corners with just one out, and a fly ball was all that was needed to get them on the board. Steve Pearce did get one of those, but it wasn’t quite deep enough and the Red Sox ultimately fell short and left the runners on base.

That was….pretty much it for Boston over the next few innings. They did get a leadoff single from Christian Vázquez in the third, but he was picked off and Plesac only faced three batters in the inning regardless. Over the next couple innings they managed just a two-out walk, as the rookie made it through five scoreless innings.

Meanwhile, the big fear with the rain delay was whether or not it would last long enough to prematurely kick Price out of the game for his second consecutive start. That wasn’t the case here, though, as the lefty came back out despite having just come off the injured list. He looked more than fine, too, as he was able to keep pace with the Indians rookie who was shutting down the Red Sox.

Price picked up right where he left off before the delay, setting the side down in order in the third before allowing a single in the fourth but getting a double play to still only face three batters. Cleveland had their first best chance in the fifth when José Ramírez led off with a single and eventually got to second on a stolen base, but he wouldn’t advance beyond there. Price came back for one more in the sixth, walking his first batter of the night with one out but still getting out unscatched. In all, Price tossed six innings with the rain delay mixed in, not allowing a run on three hits and a walk with six strikeouts.

From there, we headed into the bottom of the sixth and after Plesac got the first out of the inning Devers stepped to the plate. The young third baseman worked a tough at bat, eventually getting to a full count before he ripped one into the right field corner. It bounced around out there just enough for him to get his first career triple, and that was the end of the night for the Indians rookie. That brought A.J. Cole into the game with the go-ahead run just 90 feet away, and Xander Bogaerts brought it home with a base hit shot back up through the middle. Martinez then followed that up with his second double of the day to put two in scoring position with just one down, and while it looked like they’d be left there second baseman Mike Freeman made a huge error. He let the ball get by him with two outs and both runs came around the score, pushing the score up to 3-0.

That was the score in the seventh when Brandon Workman entered the game for the Red Sox. Cleveland got a runner on with a one-out walk from Ramírez, who then stole second and moved to third on a ground out, but he’d be left there thanks to an amazing diving stop by Michael Chavis at second base to save the run.

After the Red Sox stranded a runner at third in the bottom half, it was Marcus Walden coming on for the eighth. Things did not get off to a good start for the righty when he walked the first batter he saw before allowing a base hit to get back to the top of the order. Francisco Lindor then came through, ripping a double into right-center field, scoring two and putting the tying run in scoring position with nobody out. Walden got a pop up for the first out, but then Matt Barnes was called upon to try and escape the jam but he walked the first batter he faced. He came back with a huge strikeout after that for the second out of the inning, That left it up to Ramírez, but he grounded to Bogaerts in the shift and the jam was over with the Red Sox still up one.

After the Red Sox added on a couple insurance runs in the eighth thanks to a Bogaerts double (in which he should have been thrown out at second if not for a miracle slide), a Chavis RBI single and a Pearce RBI double, Ryan Brasier came on to close out the three-run lead. It was a good thing they got that insurance, because Brasier immediately allowed a solo home run to Robeto Pérez to start that inning. He then walked the next batter he faced before serving up another home run, this one to Greg Allen. Just like that, it was a tie game and Brasier’s disastrous day was over.

So, Travis Lakins came on next and he hit the first batter he faced with the first pitch he threw before walking the next batter. Steve Pearce then made a huge play to get the runner at third on a sacrifice bunt attempt, but Lakins walked the next guy anyway to load the bases with just one out. That brought Jordan Luplow to the plate, and he rocketed a double out to deep right field off the glove of Mookie Betts to score two and give Cleveland a 7-5 lead.

So, now it was up to Boston to rally in the bottom of the ninth against Brad Hand. They had their chance as Betts and Devers hit back-to-back singles with one out to put the winning run at the plate. Bogaerts would strike out, though, leaving it all up to Martinez. He couldn’t come through, and the Red So dropped a wildly frustrating one on Tuesday.

The Red Sox and Indians will finish off their three game set on Wednesday with Ryan Weber taking on Shane Bieber. With the Bruins playing Game Two of the Stanley Cup Finals, this game has been pushed up to a 6:10 PM ET start time.

Over The Monster https://www.overthemonster.com/2019/5/29/18643599/red-sox-indians-ryan-brasier-travis-lakins-marcus-walden-david-price
Categories: Sports