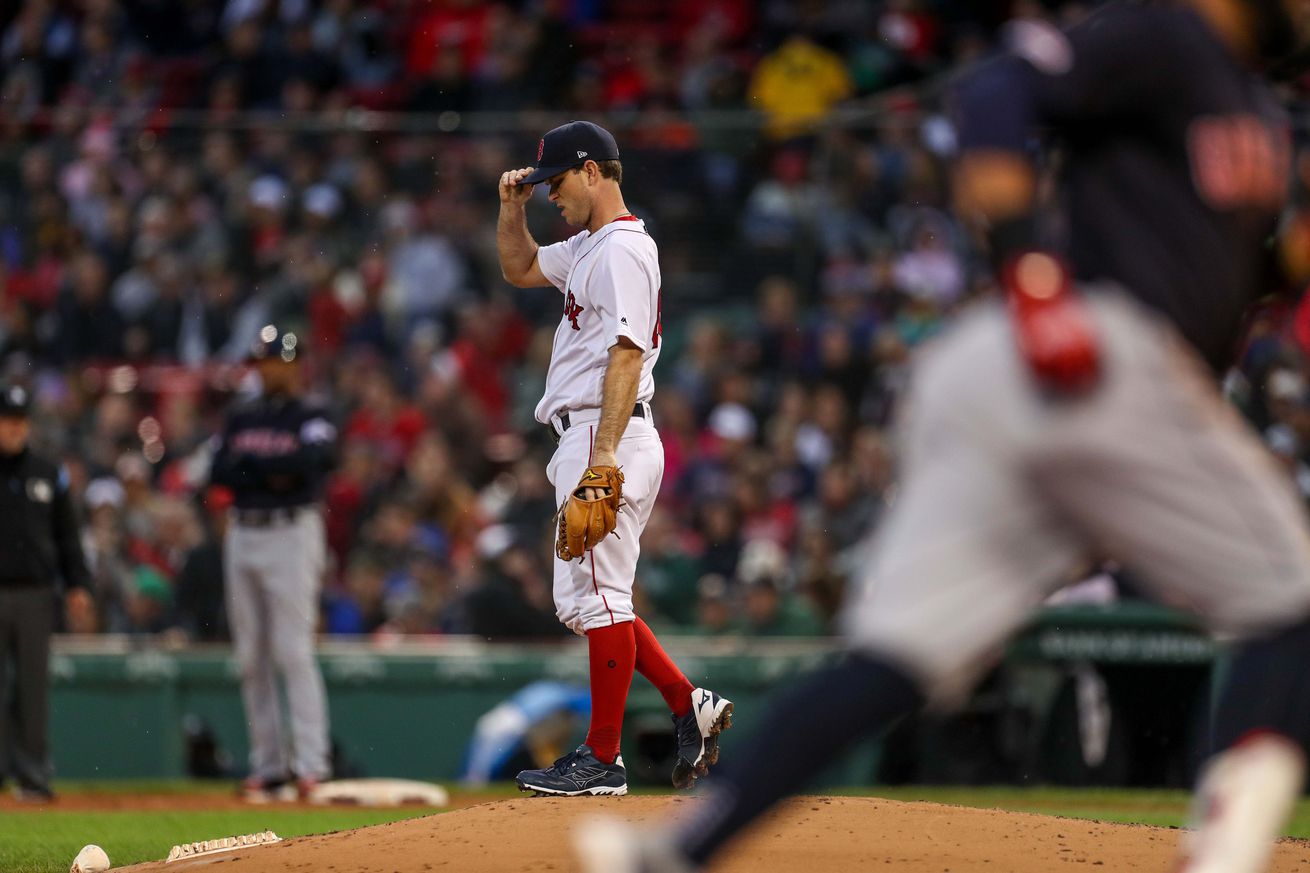 The Red Sox offense came to play against the Indians on Wednesday, scoring six runs against a very good pitcher in Shane Bieber. And…..that’s the end of the good from this game. The pitching for Boston picked up right where they left off in Tuesday’s game, which is to say they gave up a whole bunch of runs. Including those final two innings on Tuesday, Red Sox pitchers allowed runs in a whopping nine straight innings with a total of 21 runs scored in that span. If my math is correct, that’s an ERA of 21.00. Ryan Weber was the main perpetrator here, as he did not have the same location as he did his last time out in Toronto. His stuff is not good enough to get away with consistently bad location, and that fact was on display in this game as Cleveland made a ton of hard contact and scored a ton of runs. It was not a fun night, is what I’m trying to say.

This was a wild, back-and-forth game with both offenses rolling. Really, the only way it makes sense to get through this one is to just go straight chronologically, which means we start with Ryan Weber taking the mound for the top of the first. Now, we know the 28-year-old righty was phenomenal in his last time out when he tossed six scoreless innings against the Blue Jays. It was impressive, even if we knew that wasn’t going to be the expectation every time out. That said, we also saw what his stuff looked like over an extended outing, and it is not stuff that leaves a lot of room for error. If he’s locating, he’s tough to square up. If he’s not, well, just wait until you see what happened on Wednesday.

The Indians started their rally with a one-out single from Oscar Mercado before Carlos Santana started what was a big game for him. The Indians first baseman blasted one off the wall in straightaway center field and the carom got by Jackie Bradley Jr., allowing the run to score easily and for Santana to get into third with Cleveland’s first triple of the season. A couple pitches later, Weber would throw a changeup in the dirt that Christian Vázquez stabbed at with a backhand attempt, allowing it to get to the backstop and giving the Indians an early 2-0 lead.

It certainly wasn’t the start the Red Sox were looking for, particularly considering how the game on Tuesday ended. To make matters worse, they were going up against a very talented pitcher in Shane Bieber who is liable to shut down any lineup on any given day. Fortunately, that wasn’t the case here as the Red Sox were able to get some good swings against the righty pretty much all night. The first of those good swings came very early when Mookie Betts got a middle-middle fastball that he sent into the Monster Seats for a solo shot, cutting the deficit in half.

Unfortuantely, the break between innings wasn’t what Weber needed to get his command back and he didn’t waste much time giving that run right back. Jake Bauers, who was highlighted before the game on NESN as Clevelands “cold” hitter, blasted a double high off the Monster in left-center field and then Greg Allen was hit in the foot on a bunt attempt to put the first two guys on. Kevin Plawecki followed that up with a hard liner that bounced off a diving Betts’ glove (it would have been an amazing catch if he had made it), making it 3-1 Cleveland.

Weber did escape further damage from there, and the Red Sox offense went back to work against Bieber in the bottom of the second. That rally was started by Xander Bogaerts with a base hit before Brock Holt continued to swing a hot bat since his return from the IL. He blasted a double out to the right field corner, allowing Bogaerts to come all the way around to score and get Boston back to within one. Then, after a couple of outs were recorded. Vázquez moved the runner to third with a single and Andrew Benintendi blasted a double out to right field to tie the game at three.

If Weber was ever going to give his team the ol’ shutdown inning, his would have been the time. He did not come through. He once again allowed the first two batters to reach, this time on a walk and a single, before Bauers knocked in another run with a single. Allen came up next and smacked Cleveland’s second triple of 2019, driving in two runs and giving Cleveland a 6-3 lead.

After the Red Sox went down for the first scoreless inning of the day, Santana came through again with Weber still pitching for some reason. The Red Sox pitcher threw a flat two-seam up in the zone on the outer half of the plate and Santana got his arms extended and sent it the other way over the wall in left field for a solo shot, pushing Clevleand’s lead up to four.

Fortunately, the Red Sox had some answers again in the bottom of the fourth and weren’t ready to let the Indians run away with this one. It all came in a hurry and all with two outs, too. First, it was Bradley, who continues to look so much better at the plate. He went the other away again, blasting one out to the Monster Seats for a solo shot, cutting the deficit to three. Then, after Vázquez kept the inning going with a single Benintendi came to the plate and blasted another ball to deep right field. This one made it into the bullpen and just like that it was back to a one-run game.

At this point Weber was out of the game and the bullpen came on for Boston to start the fifth, but they didn’t have much better luck than the starter. Josh Taylor was the first guy out of the bullpen, making his major-league debut. He gave up a pair of doubles in the inning to push the deficit back to two. Then, Colten Brewer came on for the sixth and allowed a single, a walk and a ground-rule double to give up two more, making it 10-6 in Cleveland’s favor. At that point, the Red Sox had gone a whopping eight straight innings in which they allowed a run. Not ideal!

Meanwhile, the Red Sox offense was struggling to get much going after that three-run fourth. They went down in order in the fifth before managing just a single in the sixth.

Once the seventh rolled around, the game was essentially over. Hector Velázquez came on for the Red Sox and he extended the Red Sox steak of allowing runs to nine straight innings, and he did it in style. The Indians plated four more in that innings, pushing their lead up to 14-6. He came back out for the eighth, and finally, mercifully, the streak ended and Boston got their first scoreless inning since the eighth the night before.

In the bottom half, the Red Sox added two more runs on a Bogaerts homer, cutting the deficit down to six. That went down to five a couple batters later, too, after back-to-back doubles from Bradley and Vázquez.

Heath Hembree got the call for the ninth and tossed a scoreless inning before the Red Sox loaded the bases but failed to score in the bottom of the ninth to end a rough game.

After this disappointing series, the Red Sox head down to the Bronx for a huge four-game set that could change the season with a lopsided result in either direction. For the first game on Thursday the Red Sox will send out Chris Sale to take on J.A. Happ. First pitch is scheduled for 7:05 PM ET.

Over The Monster https://www.overthemonster.com/2019/5/29/18645026/red-sox-indians-carlos-santana-ryan-weber-taylor-brewer-velazquez-benintendi-bradley
Categories: Sports