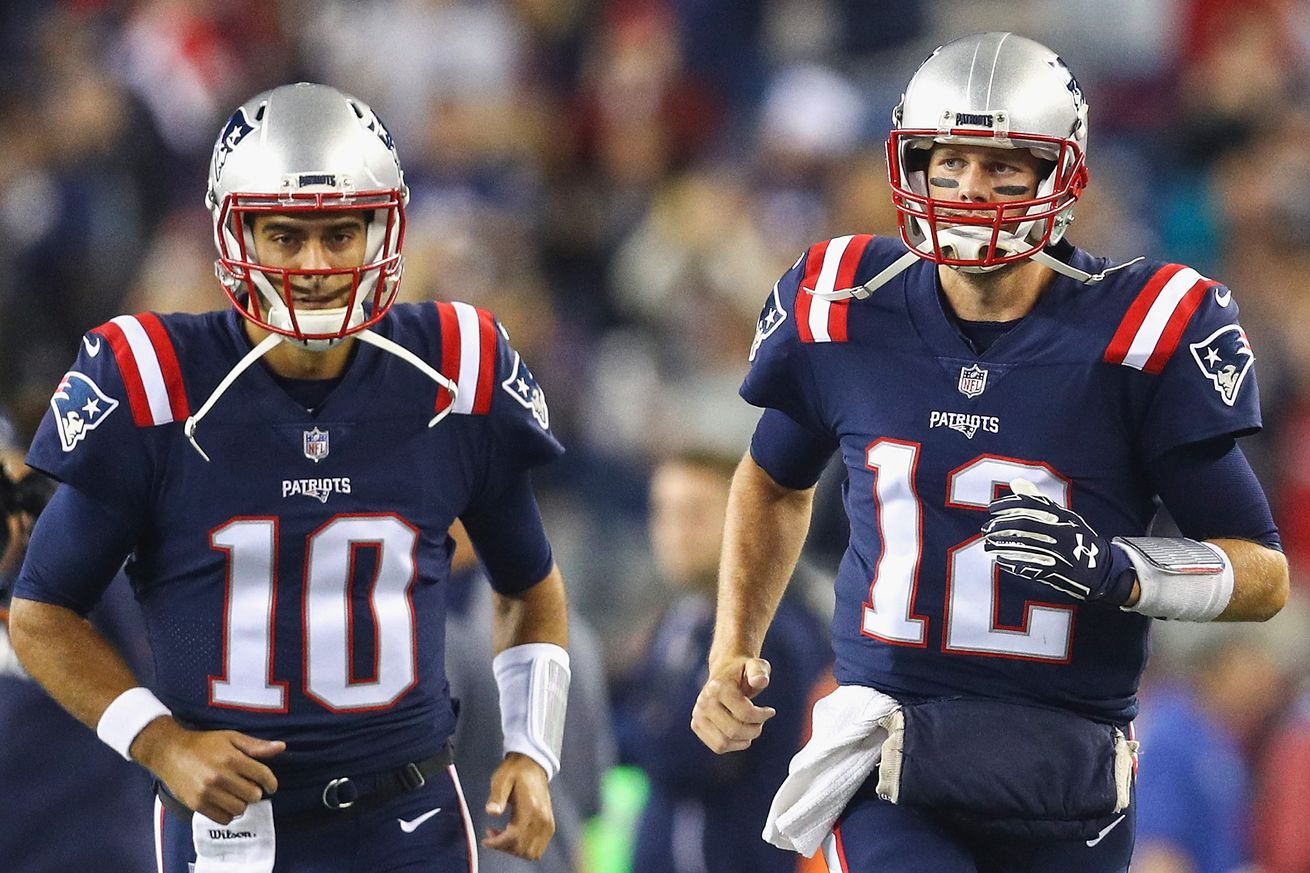 What would’ve happened if New England had chosen Garoppolo over Brady?

On October 31, 2017, Bill Belichick made the (correct) decision to move on from Jimmy Garoppolo. But what if he hadn’t made that decision? What would the last year and a half look like for the New England Patriots?

Before I start, you need to understand, no matter what anyone tried to tell you, the Patriots would not have been able to keep both Tom Brady and Garoppolo. Because of that, I’m just going to be talking about the past and future of the Patriots if they had traded Brady instead of Garoppolo. Also, let’s assume that the Patriots wouldn’t have traded Brady mid season, meaning he still wins MVP, and then throws for the most yards in Super Bowl history in 2017, and then the Patriots trade him in the offseason. That sentence hurt my brain, but let’s take a look anyway.

First, there’s the matter of what the Patriots would’ve gotten in return for Brady. This is more complicated than you might think. Trading Tom Brady would be like trying to sell the Mona Lisa. You’d get a ton in return, but whatever you got wouldn’t be enough. They are both truly priceless, items so valuable that you will never be able to receive full value in exchange.

Let’s put that aside and think like an NFL GM for a second, though. Who would be willing to trade for Brady? You would think that it would have to be a team that feels they are just a quarterback away from at least making the playoffs. Because, no matter how dominant Brady is right now, realistically, he only has a few years left.

Why would the Browns have traded the #1 pick to the Patriots for Brady? Instead, you could draft Baker Mayfield and have him for the rest of his career. In all likelihood, the Browns weren’t going to be great any time soon (they might be pretty good this year, but no one would’ve predicted that last offseason), and it’s better to have a young QB who can be the face of your team and franchise for the next 10-15 years when you’re in that situation.

So that means the Patriots are probably getting a mid to late first round pick, and, even if you’re getting multiple picks, I can’t imagine that would be enough.

Let’s say that Belichick ended up pulling the trigger anyway, and making the trade. Does that then create a cascade of changes? Do they hold onto Brandin Cooks instead of trading him for #23 in 2028? Do they draft Sony Michel at #31 in 2018 (if they even get that slot with Garoppolo at the helm)? They also wouldn’t have been able to make as many trades in the second round, because most of them came from the pick they got for Garoppolo.

Would you feel a little better about the trade if you knew that Michel was the running back, and the Patriots still had Cooks? Probably not, but I think they’d still be decent. Maybe they still would’ve traded for Trent Brown but, without a tackle waiting behind him, perhaps they would’ve tried to keep him.

It’s also hard to imagine that they would’ve done into Garoppolo’s first season as a starter with the receiver depth chart looking the way it did at the beginning of last season. At the same time, Belichick has always built his team with the next five years in mind, so perhaps it wouldn’t have looked so different after all. It’s certainly not as simple as just swapping Brady out for Garoppolo, but what the exact team would look like is impossible to know.

One thing is a certainty, the Patriots wouldn’t have won Super Bowl 53 this season with Garoppolo at quarterback. Regardless of whether or not he ended up tearing his ACL, I can’t imagine hin leading the Patriots to the title this year. So that’s one title that the Patriots would have sacrificed to make the change, and who knows how many more Brady will win before he hangs them up.

Now, some people in the media have been trying for years to convince you that Garoppolo was the next great QB, and that it was time to move on from Brady to the next phase of the dynasty. The real question, however, is whether or not Garoppolo could play well enough, and for long enough, to justify the decision in the long run. Unfortunately, there is no way to know the answer to that. Even if he is never truly elite in San Francisco, he might’ve had a different set of circumstances, and better coaching, in New England that would’ve allowed him to be more successful.

In the end, we should all be very thankful that Belichick didn’t listen to those talking heads, and decided to keep Brady instead of Garoppolo. Even though there has been much made about the return they got from the trade, I think we can all agree they did just fine. The Patriots would have certainly given up the short term success they had last year, and could have this year. But, they would be banking on the success of the years after Brady retires. They did the right thing, but there’s something even more incredible to me.

In 2013, Felger and Mazz asked the question of whether you’d trade Brady for Andrew Luck, who was drafted first overall in 2012. They thought you should, and Brady has not only proven them wrong about Luck, but is still playing, and has proven them wrong about Garoppolo as well. Belichick drafted Garoppolo to potentially be Brady’s successor, but Brady wasn’t ready to give up the throne just yet. Hopefully, the Patriots’ head honcho is able to find a successor as good as Garoppolo in the future. Otherwise, whether they made the right decision in trading Jimmy or not, there might be some tough years once Brady retires.