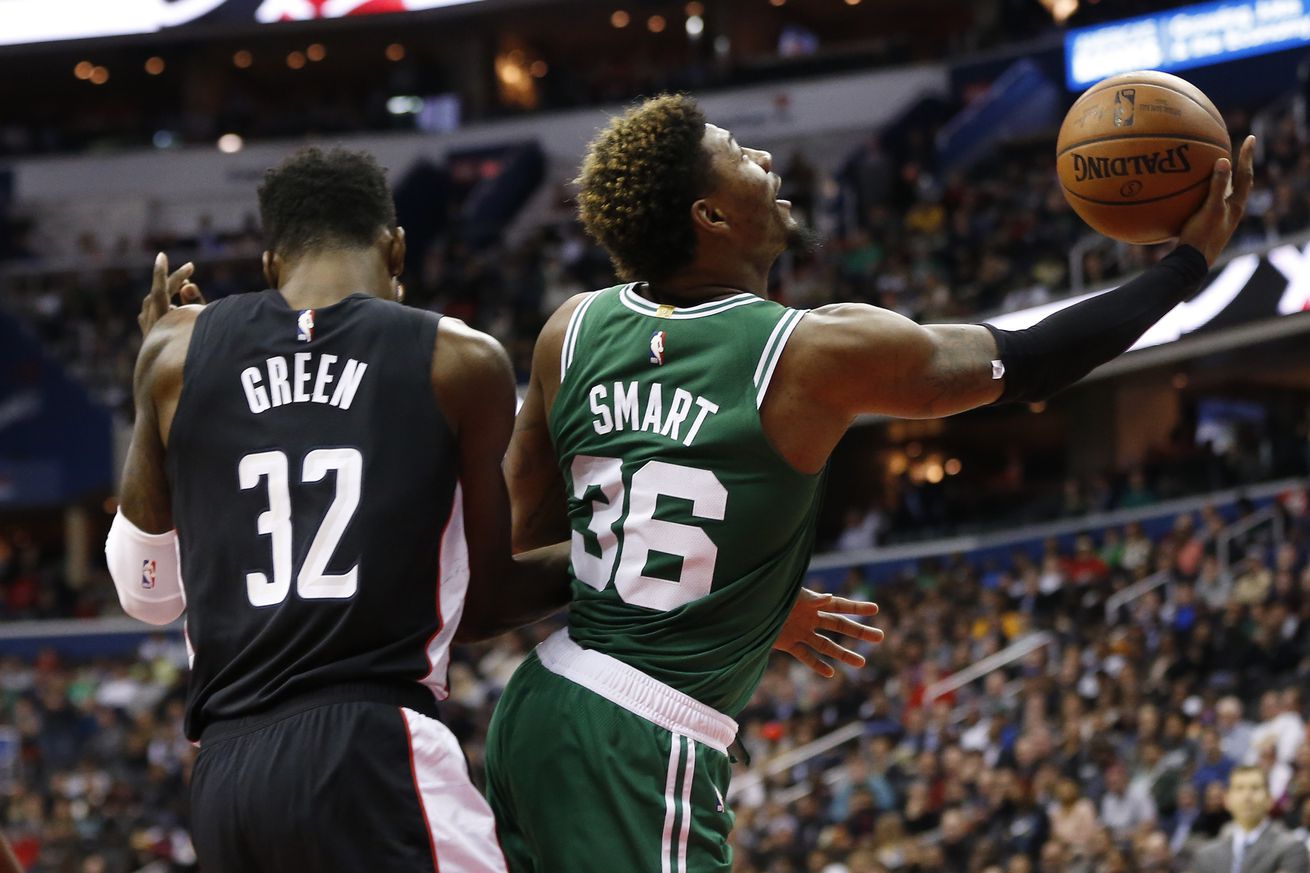 This Tuesday, we began a new series here on CelticsBlog, breaking down the best individual performances for each player on the Celtics roster this season. Part One focused on the deep end of the Celtics’ bench — from guys like P.J. Dozier or Guerschon Yabusele up through Aron Baynes — and suffice to say, Game 82 against the Washington Wizards was mentioned more than a few times.

Now, we’re moving ahead to the team’s primary rotation, with today’s installment covering the team’s most crucial role players — and finally putting Game 82 in our rear-view mirror.

While yes, Rozier did seem generally more comfortable as a starter — or at least, with a larger share of minutes — this season, the truth is that much of the narrative surrounding “Starter Terry” was built on the teams he started against. Rozier started 14 games this season, but only two of those games came against teams with aspirations towards a deep playoff run — Philadelphia (where he scored just five points) and Utah (where the Celtics lost by eight). The remainder came against either flawed borderline playoff contenders like Brooklyn or Sacramento or deep lottery teams like Dallas or Cleveland (twice!).

In other words, he didn’t often face a whole lot of resistance.

Perhaps no other game fully encapsulates the Starter Terry experience better than this one: uncharacteristically efficient shooting and a stuffed stat sheet in a blowout victory over a terrible Cavaliers team. This isn’t to say he played poorly, but Cleveland’s flimsy perimeter defense certainly helped him along. Check out how Collin Sexton gets erased from the play on this Marcus Smart screen.

Games like this are the reason people still have some faith in Rozier, and why some team is likely still going to throw decent money at him in restricted free agency this summer. After all, he looks the part of a dynamic NBA guard — his athleticism really pops when he’s decisive in attacking the rim or taking to the skies for contested rebounds. He opened this game with eight consecutive made baskets, almost all of which came off of smart, crisp decision-making. Rozier was locked in.

That’s the inherent issue, though: because he never really seemed to buy into his bench role this season, he was rarely locked in like this. This was his best all-around game, but it still feels a little disappointing for that reason. At the end of the day, performances like this just left us dreaming of a Celtics team where an engaged Rozier was the norm, rather than a surprise. Perhaps plays like this might have been more common in that case.

While Rozier gets discussed — mostly by himself — as the guy who sacrificed the most on this year’s Celtics, in reality, that player may have been Jaylen Brown. This season was one of self-discovery for the 22-year-old forward, as he adjusted from a featured role on last year’s team to a more complementary one on this one — and lost his starting job in the process. Brown started the season slowly, but noticeably found his comfort level on the second unit as time passed.

The transition point in Brown’s season may have been this New Year’s Eve game in San Antonio, a game that featured many of the hallmarks of his strong late-season play. He led Celtics scorers with 30 points, but all of his buckets came within the flow of the Boston offense — sharp corner threes and energetic rampages to the basket, along with a few of his customarily earth-shaking dunks. Boston ultimately lost this game in tough fashion after a 46-point third quarter onslaught from the Spurs, but Brown was an undeniable bright spot — his performance in his usual second- and fourth-quarter shifts kept the Celtics within striking distance, and his -2 for the night was actually second-best on the team.

Though Brown’s most important role will likely always be as a “three-and-D” type wing player, his offensive game started to diversify in encouraging ways. He leveraged his excellent athleticism more effectively on drives to the basket, improving his field goal percentage at the rim to 67%, and between 10 and 16 feet from the basket, he shot a career-best 46% — noted mid-range maestro DeMar DeRozan shot just 42% from the same range. His post-up fadeaway jumper has become a nifty little weapon, even if it’s perhaps not something he should feature all that often.

Much like most of the Celtics’ young players, Brown’s biggest hurdle this season was learning how to adapt to a complementary role on this season’s roster after injuries provided a leading one on last year’s. Despite the slow start, he ultimately accomplished that, and the Spurs game stands as an excellent examples of how he can to contribute to winning basketball going forward — be it with the Celtics or elsewhere.

For the 2018-19 Celtics, it was the best of Marcus Morris, and it was the worst of Marcus Morris. His season be divided pretty neatly into two halves: the first three months, in which he shot 45% from behind the three-point arc and helped stabilize the team after their slow start, and the final four months, in which he shot 32% from behind the arc and seemed to block the team’s forward progress heading towards the playoffs. Add both halves together, and you get his best NBA season overall, but one that doesn’t fall too far outside his established career norm.

It’s true that Morris stepped up to the plate in an admirable way in the playoffs, and considering the heightened stakes, he had a few postseason performances that would have been worthy of selection here — his gritty double-double in Game 4 against Milwaukee is a notable standout. Still, I think his best moment lies within that first half of the season: his 31-point game against New Orleans in December.

This was a bona fide Hospital Celtics game, with all of Kyrie Irving, Al Horford and Aron Baynes riding the pine due to a variety of injuries. Rozier and Daniel Theis started, Robert Williams played the first substantial minutes of his career (we discussed this in Part One) and Semi Ojeleye even saw 21 minutes. And remember, the Pelicans were still trying to win at this point in time — they entered play at 14-14, and the Anthony Davis/Rich Paul/Los Angeles Lakers drama was still off on the horizon.

All this makes it that much more impressive that the Celtics were not just able to win this game, but turn it into a rout. For his part, Morris knocked down five three-pointers, bullied the Pelicans’ smaller wings with his signature array of funky mid-range floaters and fadeaways and helped maintain the team’s defensive composure in the absence of Horford. Beyond 41 points from Anthony Davis and 20 from Julius Randle, no Pelican was able to find an offensive rhythm.

It’s a shame that Morris’ early momentum wasn’t able to sustain itself in the second half, but overall, he was a good locker room presence, brought maximum effort in the postseason and fueled some undeniably entertaining performances along the way. At the end of the day, you have to feel pretty good about what he brought to the roster this season.

There may have been more statistically impressive performances from Marcus Smart this season — he hit six threes en route to 20 points against Memphis in January, for instance — but for my money, no game encapsulated what Smart meant to this Celtics team than this particular one on the road, short-handed against the Wizards.

To go a step further, this might be one of the all-time most definitive Marcus Smart games we’ve ever seen. With Horford, Brown and Hayward all sidelined, the Celtics found themselves in an overtime slugfest with the then-healthy Wizards, and Smart was one of four Boston players to see at least 39 minutes in the five-point win. He ended up with 18 points and put together the usual highlight reel of ludicrous defensive plays. Every time the Wizards started to find some momentum, it seemed like Smart was right there to suck the wind out of their sails.

You might remember this as “that game where Smart played center,” a revelation provided by coach Brad Stevens during his post-game press conference. “He’d played every position for us, but he’s never played the five,” he explained. “Marcus Smart has, officially, done it all.”

I went into greater detail on Smart’s season last week, but that one Stevens quote really sums it up — Marcus Smart did it all for the Celtics this season, and against the Wizards, he did it the most.

Stay tuned for our third and final installment, covering the Celtics’ All-Stars of past, present and — possibly — future.