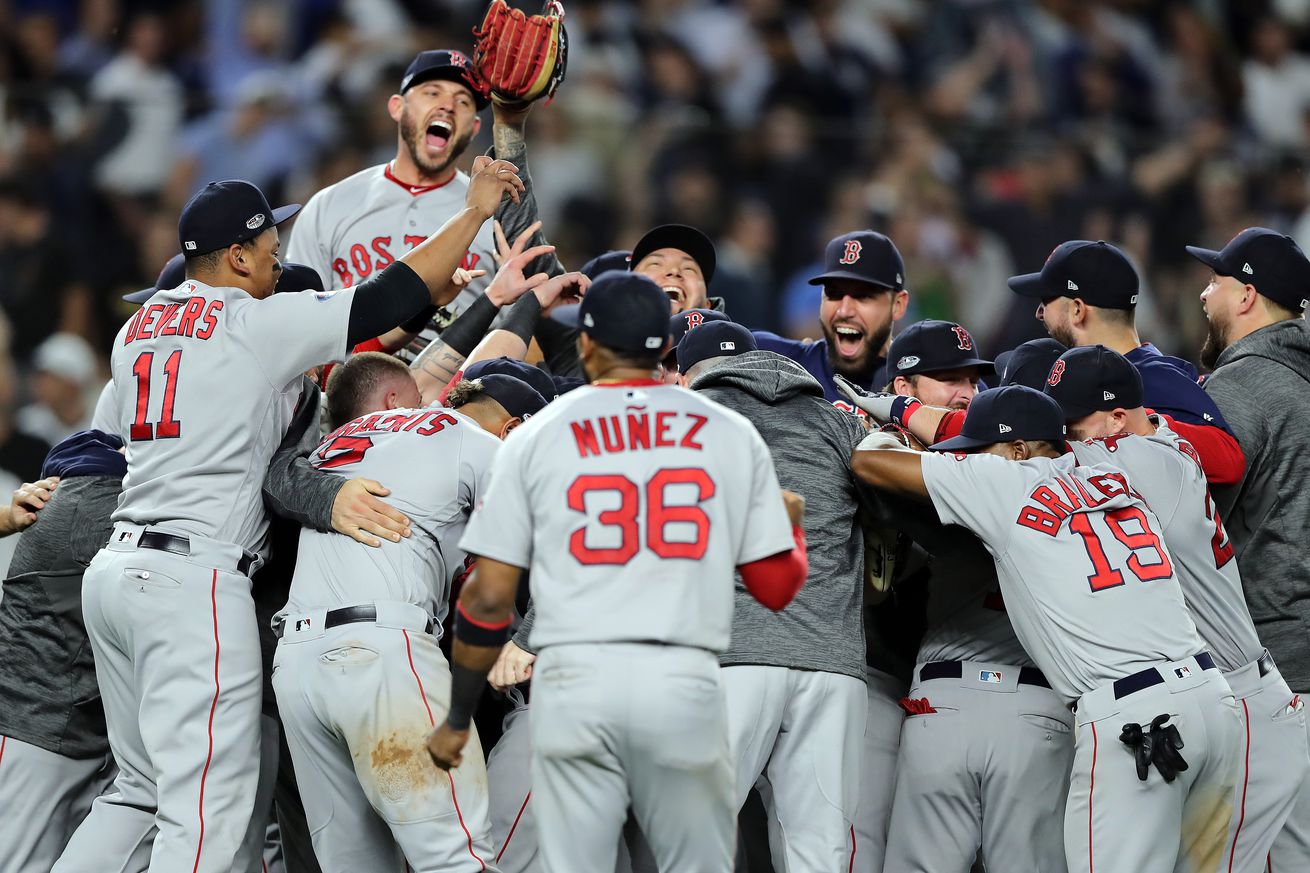 A look ahead to the big four-game series in New York.

The Yankees have overcome an absurd number of injuries up and down their roster this year to jump out to a division lead and the third best record in all of baseball.

The Yankees are starting to get healthier, and they are playing great baseball right now. They are coming off a series in which they took two of three from the upstart Padres, and they haven’t lost a series since they dropped both games in a two-game set to the Diamondbacks on April 30 and May 1. Their schedule hasn’t been terribly strong, but they are winning baseball games and that’s all that matters.

What a run of starts for Chris Sale, who is giving the Red Sox their money’s worth with his recent run of matchups. With David Price grabbing the start on Tuesday, Sale was pushed back to Thursday to face the Yankees. This comes after his previous two starts coming against the Astros. The results over his last couple starts haven’t been terrible as he’s allowed five earned runs over the two starts combined and has 15 strikeouts, but he has also not quite looked like his peak self. Part of it is that the Astros lineup is as hard to fool as any in baseball, so they were taking more borderline pitches and drawing more walks. Still, Sale’s command needs to be a little better this time out against the Yankees. The Red Sox ace did face New York back in mid-April, allowing four runs in five innings with six strikeouts and a walk.

Happ was originally acquired by the Yankees midway through last season, at least in part because of his history of dominating the Red Sox. Boston has struggled against lefties in general this year, and Happ generally has confidence heading into these matchups. That being said, the Red Sox did start getting to him down the stretch last year — it started with the “Time to Party” home run from Mookie Betts — so hopefully that can continue here. Happ has had a rough year so far, pitching to a 5.09 ERA with a 5.29 FIP and a 6.86 DRA. The southpaw has seen his strikeouts drop off significantly and while he’s always allowed some home runs his rate is even higher than usual this season. He’s allowed five homers in his last three starts, though he did strike out ten Royals in his last time out. The Red Sox scored three runs off the lefty in 6 1⁄3 innings in April with four strikeouts and a walk along with two homers. Happ will feature a low-90s four-seam, a high-80s two-seam, a slider and a changeup.

Rodriguez looked like he was ready to hit a rough path in his season, having allowed eleven runs over his two starts heading into his last one in Houston. One of those starts was partially on Alex Cora, who tried to get too much out of his lefty, but Rodriguez’ command and pitch mix had been taking a step back. Then, he went out and allowed just a run in Houston and some of that confidence is coming back. Granted, he didn’t have the strikeouts we have seen from him for most of the year, but the results were there. This will be the southpaw’s first matchup against New York this year, but in 2018 he pitched to a 6.62 ERA against the Yankees in three starts and two relief appearances.

Officially, the Yankees have not named a starter for Friday night’s game, though Domingo Germán is almost certainly going to get the ball. The 26-year-old righty has been one of the biggest breakouts on the mound in all of baseball this year, and he leads the American League in wins right now. Germán has made 10 starts this year (plus one relief appearance) and he’s pitched to a 3.43 ERA with a 3.76 FIP and a 3.42 DRA. With a bit of a flyball tendency — albeit not a significant one — he does allow a few more home runs than one would like, but he also throws strikes and misses plenty of bats. The good news is he’s coming off his worst outing of the year in which he allowed seven runs in five innings, so hopefully that’s a sign of things to come. He’s going to throw a lot of curveballs, which is his best and most-used offering, as well as a pair of low-to-mid-90s fastballs and a changeup.

Porcello had been a a steady presence in the Red Sox rotation for most of this month of May, but his last time out against the Indians was not great. The Red Sox still won that game thanks to a great performance from the lineup, but Porcello did allow five runs. That said, only three were earned and he still made it through 6 2⁄3 innings, so it really wasn’t too bad. The righty hasn’t really been missing a ton of bats of late, but he’s shown he can get by without that. It’s a little riskier in a park like Yankee Stadium, particularly against lefties, but Porcello has shown a great ability of late of inducing weaker contact. He was very good against New York with a 2.31 ERA over four starts against them this year.

There is less certainly about who is going to get this start for the Yankees, as this is more of a true TBD. I’m not going to speculate on this one.

Hold on to your butts. David Price is pitching at Yankee Stadium on Sunday Night Baseball. What could go wrong?! Price got the playoff monkey off his back last year, but we know the issues he has and continues to have at Yankee Stadium. The good news is he’s coming off a great start his last time out against Cleveland that was eventually blown by the bullpen. Despite an hour-long rain delay in the middle of the start, Price tossed six scoreless innings in the start. The lefty did pitch to a rough 10.34 ERA over four starts against the Yankees last year.

Hey, look, it’s a TBD for the Yankees! This one is a little more clear in that there are two real options for New York for this start. Masahiro Tanaka is on schedule to make this start, having last pitched on Tuesday. There’s a chance he could get pushed back, though, as CC Sabathia could be activated off the injured list in time for this start. We’ll keep an eye on this one.

Jacoby Ellsbury has not played in a regular season baseball game since the end of 2017 and has a long list of injuries he’s currently dealing with. I don’t know if we’ll even see him on the field again.

Gary Sánchez missed some time this year with injury, like every other Yankee, but he’s been smoking the ball since coming back. He does have a big strikeout rate and his batting average is somewhat low (though not as low as you’d think), his .393 Isolated Power is absurd and terrifying.

Luke Voit was a popular pick to take a major step back this year, and I was at least wary of his ability to build off a breakout 2018 season that came out of nowhere. Well, now he’s proven he’s a legitimate middle-of-the-order hitter. He’s drawing walks, not striking out too much and crushing the ball on a regular basis

Aaron Hicks just recently came back from the injured list and he hasn’t hit much yet but he’s always good to get on base, play good center field and hit for a little pop.

DJ LeMahieu won’t hit for too much over-the-fence power, but he’s going to put the ball in play and often hits it well and turns it into hits.

Gleyber Torres is having a big year with his aggressive approach, and he’s having a breakout season at the plate thanks to big-time power.

Kendrys Morales has just recently joined the Yankees and had a couple big moments but for the most part hasn’t gotten going.

Clint Frazier is another guy who doesn’t walk much and will strike out a bit more than you’d like, but he’s able to make up for it with his power.

Brett Gardner has hit for some surprising power himself and he’s done that while also not striking out and drawing a ton of walks.

Gio Urshela has been the biggest surprise on this roster, and while some of it has been good fortune on balls in play he has been legitimately impressive all year.

Aroldis Chapman is still in the back of New York’s bullpen, and he’s having his best year since at least 2016. The lefty is throwing more strikes in 2019, and as long as he’s not walking guys he’s extremely hard to beat.

Zack Britton was a potential target for the Red Sox this winter, though there were some question marks around him. He’s answering those questions so far this year, even if he’s not the elite arm he was in the past.

Adam Ottavino and Tommy Kahnle are the top right-handed set-up options for the Red Sox this year and they have both been phenomenal in that role.

Ellsbury, as mentioned before, is out with a long list of injuries.

Sabathia is hurt right now, as mentioned above, but could be back soon from his knee injury.

Aaron Judge has been out since late-April with an oblique injury, but he’s starting to swing and could start rehab games at some point next week.

Giancarlo Stanton was on his way back from a biceps injury and on rehab assignment, but a calf injury forced him to get shut back down.

Luis Severino was hurt at the end of spring training and he’s likely going to be out at least until after the All-Star break.

Didi Gregorius has been out all year but he’s currently on rehab and could be back as soon as the end of next week.

Dellin Betances is out with a shoulder injury but he’s starting to throw again and is hoping to be back on the mound at the end of this month.

Miguel Andújar underwent surgery on his torn labrum and he will be out for the rest of the year.

Greg Bird is dealing with a foot injury that has been plaguing him for years, and there’s no timetable for his return.

Jordan Montgomery has been out since last season after undergoing Tommy John surgery but he could be back in New York’s rotation by August.

Troy Tulowitzki is working his way from a calf injury, but it’s not clear where he’d even play when he does get healthy.

Ben Heller underwent Tommy John surgery early last year and is likely a month or two away from returning.

Jonathan Loaisiga is out with a rotator cuff injury and will be out of action until at least late July.

Jake Barrett is out with an elbow injury and there is no timetable on his return.

Most of this weekend should be good, with daytime temperatures in the high-70s and skies looking clear. If there is going to be an issue it will be on Thursday as the forecast has thunderstorms in the area all night.