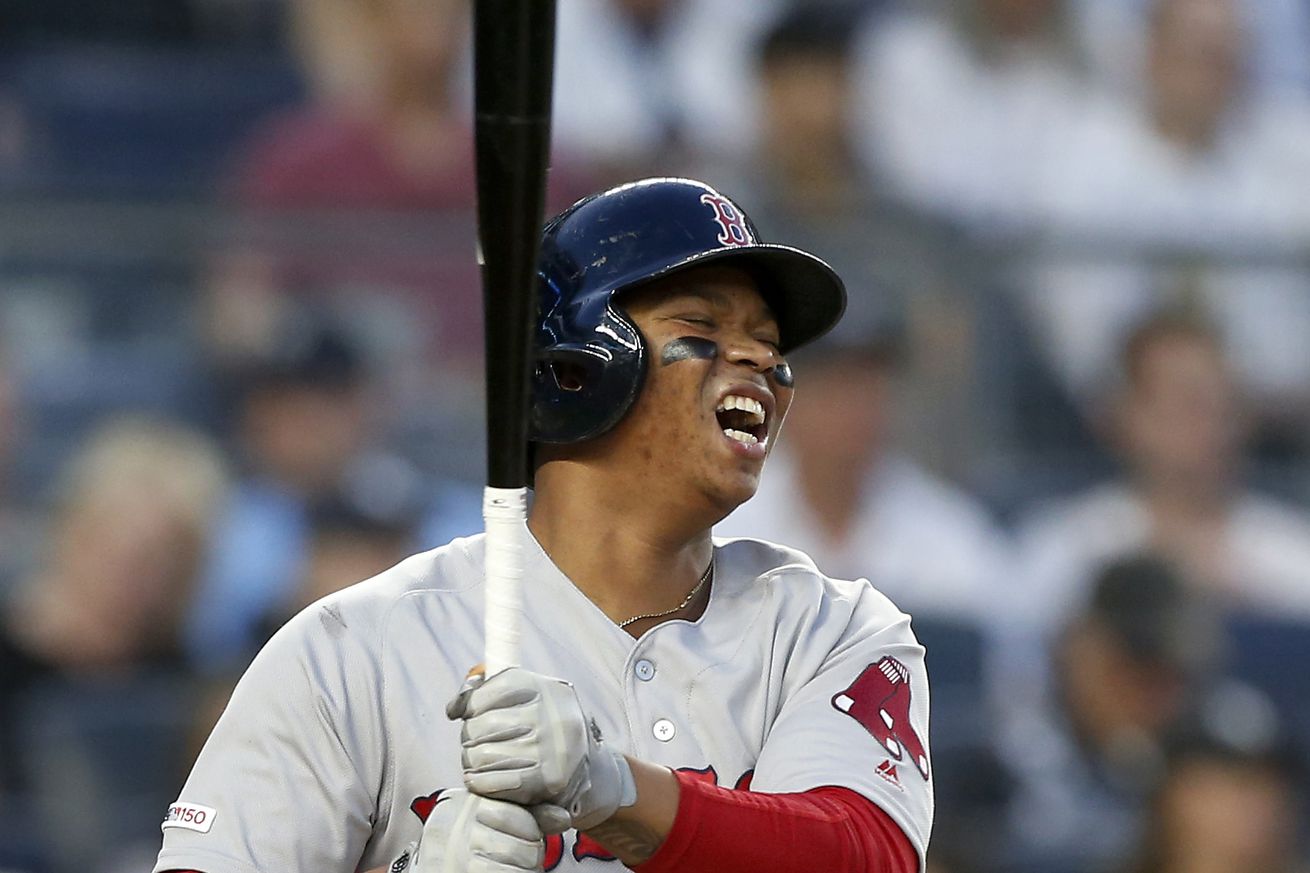 Chris Sale wasn’t perfect, but the offense did him no favors.

The Red Sox have now lost nine of Chris Sale’s twelve starts this year, which is not exactly what a team with playoff expectations is looking for when their ace is on the mound. He is certainly partially to blame for this, particularly early in the year. At the same, he is getting less run support than any other pitcher in the Red Sox rotation. That was the trend that continued on Friday in the delayed series opener in the Bronx. Sale wasn’t perfect, to be fair, leaving a couple of bad pitches over the plate and allowing four runs in six innings. Still, he struck out ten and walked only one, and he put his team in position to win against an average-at-best pitcher in J.A. Happ. Instead, the Red Sox offense looked helpless against the lefty as they have so often this year. They got a home run from Rafael Devers and….not much else. The worst part of the game was in the fifth when they had two on with two outs and were trailing by two and Eduardo Núñez was back-picked off second base. The Red Sox are now 8.5 back in the division.

In their previous series against the Indians, the pitching was the big problem for the Red Sox. The offense had some frustrating moments, to be fair, but for the most part they did their job and were let down by their teammates on the mound. Heading into Yankee Stadium, the hope was that they’d be able to keep the hitting up, particularly with Chris Sale on the mound for the series opener on Friday. They were going up against J.A. Happ, a guy who has shut them down in the past but against whom they’ve had success more recently. He’s also a lefty, though, and southpaws have given the Red Sox plenty of trouble in 2018.

In the early going, the Red Sox looked pretty solid, and were at least making Happ work. They managed only a walk in the first inning, but it was an 11-pitch at bat from Andrew Benintendi that resulted in the free pass and Happ threw 24 pitches overall in the frame. Then, in the second, they got a big swing from a guy who has been coming through with big swings for this entire month. That would, of course, be Rafael Devers, who worked a full count against the Yankees southpaw. Happ then tried to sneak a high fastball by the Red Sox third baseman, but Devers was all over it. He sent a high-flying blast out to left-center field that cleared the wall for a solo shot, giving the Red Sox what was a 1-0 lead at the time.

After the homer, however, things went downhill against the Yankees starter. The Red Sox did get one more runner in the second on a well-hit infield single (that probably should have been an error on Gleyber Torres) from Jackie Bradley Jr., but that was it. They then went down in order in each of the next two innings.

Meanwhile, Sale was pitching against a non-Astros team for the first time in three starts, though the lineup for New York is not all that much easier even with all of their injuries. The Red Sox ace came out with an interesting strategy in the first, going almost exclusively to the slider with only a couple of fastballs being thrown. It worked, though, as he struck out all three batters he faced in the first. He came back with another strong inning in the second, allowing just a weak flared single into right field but still facing just three batters thanks to a double play.

Once the third came around, though, the Yankees started to get to Sale a little bit more and with a little bit of better contact. Gio Urshela started that inning with a defensive swing that ended up poking a ball through the middle for a base hit, and a couple batters later Brett Gardner blooped one into center field for a single of his own. That is where the soft contact for hits ended. DJ LeMahieu immediately followed that one up with a double off the wall in right-center field to drive in a run and tie the game at one. Then, after Sale got a bit strikeout for the second out of the inning, Aaron Hicks came through after being down 0-2 and eventually drove one through the left side for a two-run single. Just like that, it was a 3-1 lead for the Yankees.

After a bottom of the fourth in which Sale struck out two more and worked around a two-out double, the Red Sox threatened again in the fifth against Happ. It was Eduardo Núñez starting it this time with a single up the middle, and he’d move up to second on a ground out from Bradley. After Sandy León struck out for out number two and Mookie Betts drew a walk, Benintendi was up for what was likely Happ’s final at bat of the evening. It wouldn’t finish, though, because of a disastrous mental error from Núñez. He fell asleep from second base and was picked off by catcher Gary Sanchez to end the inning. It’s the kind of mistake that absolutely cannot happen, particularly in that situation.

Sure enough, the Yankees added to their lead right after that mental gaffe when LeMahieu came back to the plate. He was up with one out and the bases empty when Sale missed over the middle of the plate with a fastball. LeMahieu was all over it, sending it over the wall in right-center field for a solo shot, extending New York’s lead up to three. Sale would get through that inning and the sixth as well, finishing with six innings in which he allowed the four runs on seven hits and a walk with ten strikeouts.

So, it was up to the lineup to get it done against a talented Yankees bullpen. It didn’t start well with the middle of the order managing just an infield single against Adam Ottavino in the sixth. It was Tommy Kahnle on for the seventh and he allowed just a base hit to Bradley. It was Zack Britton in the eighth, and he faced three batters.

Meanwhile, the Red Sox called on Ryan Brasier for the bottom of the seventh and he’d allow just a walk in a scoreless inning of work. Josh Taylor had the eighth, and allowed a single but still faced only three thanks to Gleyber Torres getting caught stealing to end the inning.

Finally, the Red Sox had one more chance in the ninth against Aroldis Chapman. They did not do anything with the chance, going down in order and dropping the game.

The Red Sox will look to even up this series with a win on Saturday. They’ll send Rick Porcello to the mound to take on Domingo Germán, with first pitch scheduled for 7:15 PM ET.

Over The Monster https://www.overthemonster.com/2019/5/31/18648047/red-sox-yankees-chris-sale-ja-happ-dj-lemahieu-eduardo-nunez
Categories: Sports