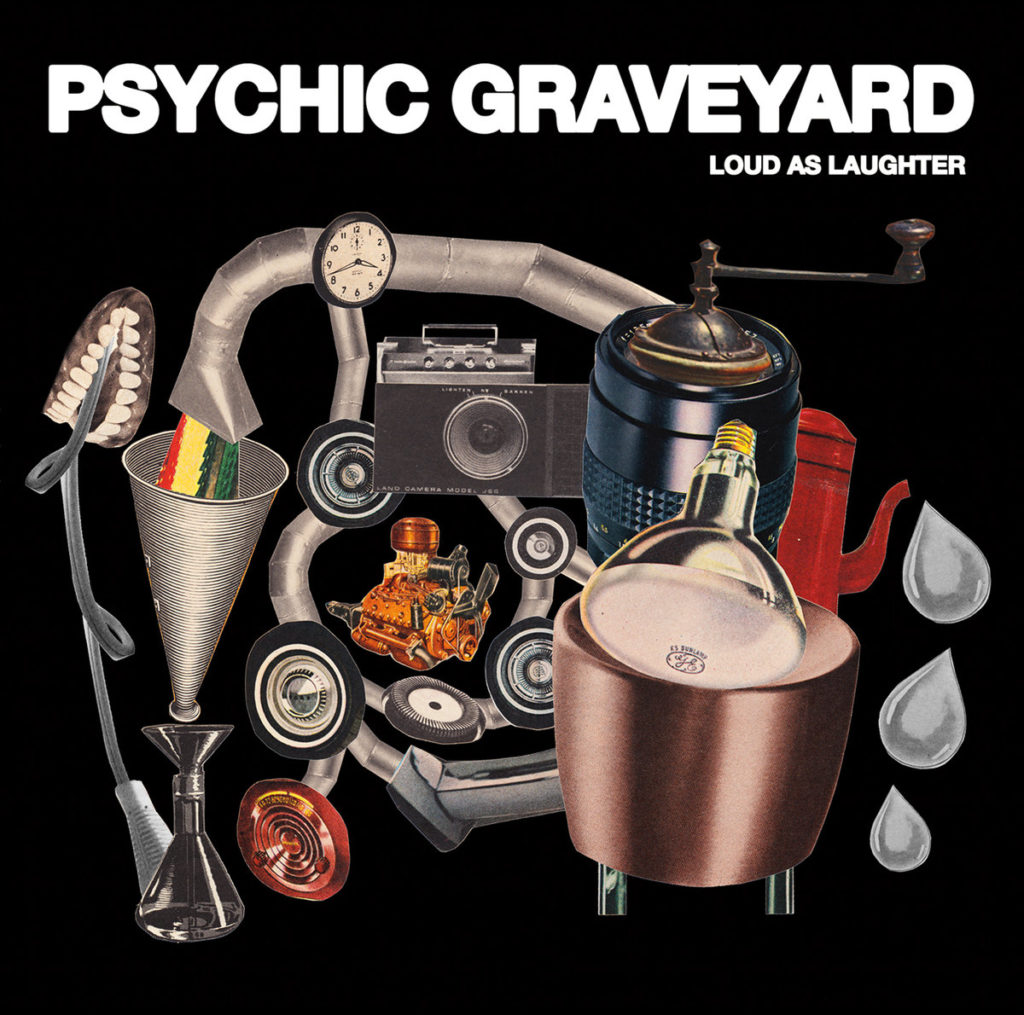 Noise Rock supergroup Psychic Graveyard released a debut album on Skin Graft Records that explores themes of madness and alienation through fragmented riffs permeating distinguishable layers of humming white noise. The pulse of the music lies in the minimal, but forceful thump of the drums and the thick veneer of synth tones, which often serves the purpose of a bass. This drum-synth combination provides an ideal foundation for noise music, it’s industrial, menacing, and claustrophobic.

Loud As Laughter by Psychic Graveyard

Placed on top of this blueprint are buzzing guitar tones and drawn out vocals. The vocals are unsettling but reserved, delivered slowly in a detached spoken word style which highlights the singer’s lack of hope in what he is saying. Songs like ‘These Are My Wires’ convey a sense of uneasiness through lyrics enunciated with a warbling drawl, “I have a plan/ I’ll take my Bendodiazepine”. The singer’s nasally tone blends with the music as just another slice of mechanical buzzing, which helps emphasize the lack of distinction between man and machine explored by the lyrics, “These are my wires/They carry bad information”. The vocals sometimes sound like they are being delivered through a tin microphone or from the other side of a shut door, making the album feel even more isolating and confined.

Listening to Loud As Laughter feels like exploring a mind subjected to the induced monotony of living in a postindustrial era. The instruments are often locked in a repetitive loop and feel like they are stuck in the machine dominated atmosphere the music creates. The guitar work on the opening title track switches from a frantic high pitched riff to a dissonant arpeggiated whirr on the chorus, both fragments only a few seconds long. These types of transitions explore the relationship between textures compartmentalized into their own temporal slots. Everything feels short circuited and the music forms by the meshing of these fragmented ideas into one functioning system, like neurons in a brain or tubes under the hood of a car.

At times the tension arises from the sheer amount of sounds being heard at once. Songs like ‘Sleeps With Knives’ feel like they are about to explode due to the rapid fire progression of sounds being played one after another; in a matter of seconds the sonic texture switches from a low frequency hum of a washing machine to a futuristic WAAAAHHH to an exaggerated satellite signal interference, all while the drums pound their way to the center of the listeners skull. The controlled bursts of noise in ‘The Night’ sound like a clip of a car crashing being replayed over and over, creating a feeling a forceful, violent movement in an inescapable loop with no end. The containment of this car crash sound becomes more intense as it gets slightly longer and pitched higher as the track goes on, as if it’s a force trying desperately to break loose of the mechanical grip of the track.

Through placing interchangeable bursts of noise under the oppressive thrust of the assembly line drum churn, Loud As Laughter successfully recreates feelings of day to day anxiety i.e. being forced to endure the daily grind while desperately looking for an escape from the cycle.