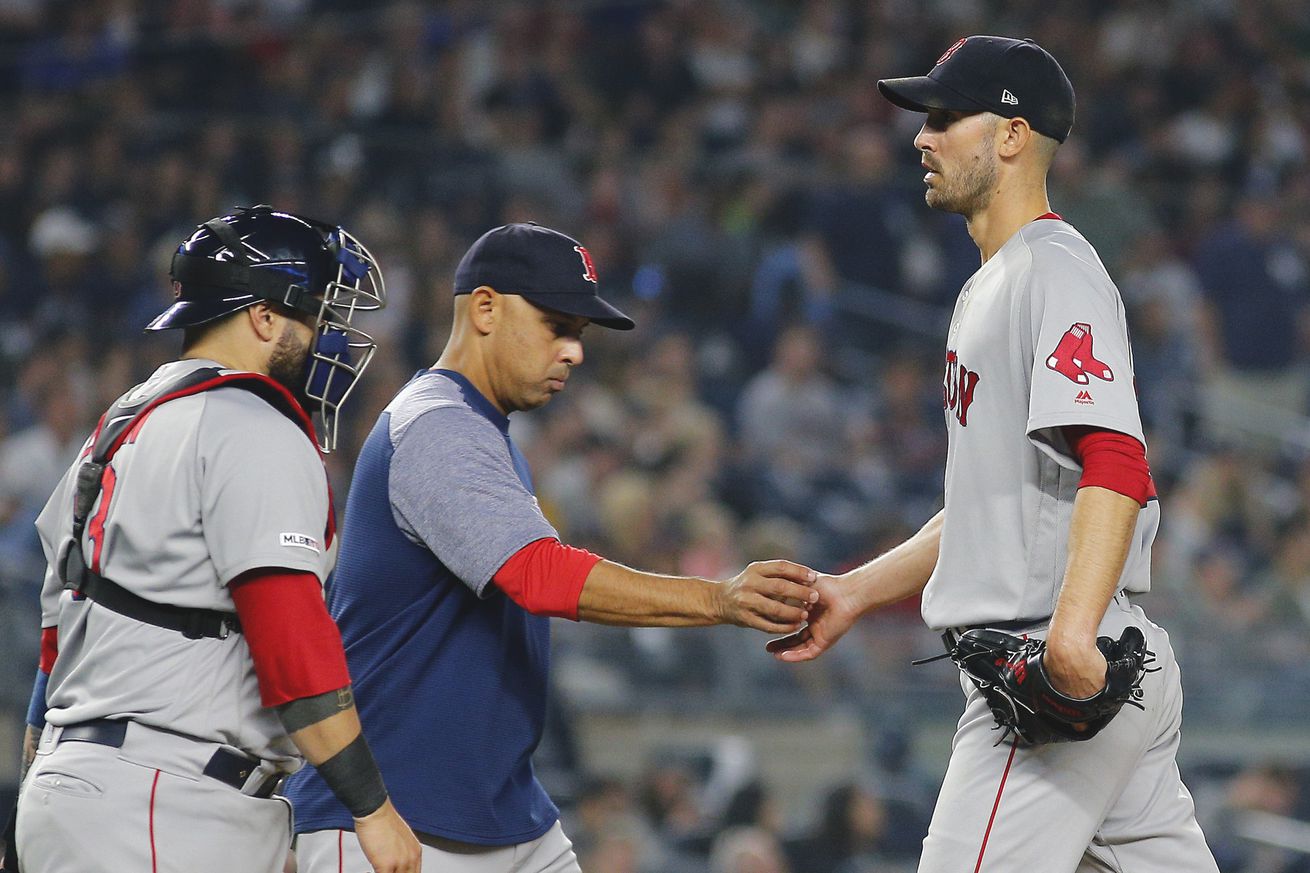 Things are not super great, as NoHo Hank would say.

The Red Sox are back to .500, and they’ve fallen to 9.5 games back in the division. Not great! Coming off a frustrating loss on Friday to open this series, the Red Sox needed to win on Saturday to still have a chance at winning this three-game set in the Bronx. Now, they are facing a potential sweep. Rick Porcello got the start and was….okay? I guess? He had a couple of bad innings and did allow a home run. I would argue his line looked a little worse than he actually pitched, but he certainly wasn’t great and I wouldn’t argue too hard against anyone who says I’m being too easy on him. The offense, meanwhile, had a couple of strong innings themselves and got a home run in their own right, but they didn’t sequence as well as the Yankees and that was really the difference. Once again, as soon as the Yankees turned to the bullpen it was pretty much over. The Red Sox need to turn it around, and quickly.

After failing to provide Chris Sale with run support on Friday night, the Red Sox were looking to get the bats going early. That was going to be easier said than done for Domingo Germán, who has struggled a bit more recently but has mostly impressed in what has been a breakout 2019 campaign for the young righty. Things didn’t get off to the best of starts, with Mookie Betts making hard contact but also an out in the first at bat of the game and the Red Sox eventually managing just a walk in a scoreless inning of work.

They did do a bit better in the second, though. They’d get the first two batters on against Germán in that inning with back-to-back singles from Xander Bogaerts and Brock Holt, but it appeared they were ready to blow this chance after Michael Chavis and Jackie Bradley Jr. both struck out. Chavis was overmatched by high fastballs, a strategy that pitchers around the league are exploiting him with of late, while Bradley was outdone by offspeed offerings. Fortunately, Sandy León proved to be an unlikely hero in the inning, poking a two-out single through the right side to score a run and give the Red Sox an early lead. They would end up stranding two, though, as Betts struck out after that to end the inning.

On the other side of things, Rick Porcello was looking to continue what has been a solid run of late against a red-hot Yankees lineup. Like Germán, the Red Sox righty got off to a solid start allowing a single in the bottom half of the first but nothing else. He entered the second with a newfound lead and was looking for a big shutdown inning. It wouldn’t come.

Balls started being hit hard, and it started right away with Gleyber Torres leading off the inning. He blasted one off the wall in right-center field, but it was played well off the wall by Bradley while Torres admired it a bit out of the box thinking it was a homer. Those two factors held the Yankees infielder to a single. Kenrys Morales followed that up with a shot into right field that reached the corner, but Morales being one of the slowest runners in the game was also held to just a single. Still, that put runners on the corners with nobody out. After a big strikeout from Porcello, Gio Urshela came up and ripped a single into right field to tie the game up at one. Immediately after that, Brett Gardner had a single of his own get through the righty side (this one was on the ground, but hit well), before DJ LeMahieu found a hole up the middle to score two more, and just like that the Yankees had a 3-1 lead after two.

Both sides settled down and went down in order in the third before the Red Sox stopped the bleeding a bit in the fourth. Bogaerts led this inning off and he got a 1-1 changeup that stayed up in the zone on the inner half of the plate. He handled it, sending it way out to the seats in left field for a solo shot, bringing Boston back to within one. Holt followed that up with his second base hit of the night and Chavis drew a walk, to put two on with nobody out for the second time in the night. Once again, it was León coming through. This time it was with one out, but he worked a full count before poking a single into center field to score Holt and tie the game. Germán would eventually be pulled in the inning, but the Red Sox couldn’t take the lead back.

After that two-run rally to tie the game, Porcello did come through with a quick, shutdown inning in the bottom half. Unfortunately, with the score still the same in the fifth he wouldn’t have as much luck. It was Luke Voit starting the rally with a one-out single, and that hit allowed Gary Sanchez to come to the plate with a runner on and two outs. Porcello would get to a 2-2 count against the Yankees catcher and tried to put him away with a slider. He got the pitch out off the outside corner of the plate, but it stayed up belt-high and Sanchez hung back and showed off his opposite field power. His fly ball carried all the way up and over the wall in right-center field, and just like that it was a 5-3 lead for New York. Porcello followed that up with a walk and a hit, and his night was over. Marcus Walden was called upon to get out of the two-on, two-out jam, but started his outing by hitting the first batter he saw. Fortunately, with the bases loaded he got a ground out to end the inning and keep the deficit at two.

So, the Red sox now had four innings to make up the two runs by which they were trailing, and they were facing Tommy Kahnle in the sixth. León started this one with a one-out single that just snuck off the glove of Voit at first base, giving him his third hit of the game. Betts followed that up with a base hit of his own to put two on with just one out, and eventually J.D. Martinez would come up with the same two on and two outs. The Yankees turned to Adam Ottavino here, and he would come through with a big strikeout to end the inning and keep New York’s lead at two.

After Walden came back out for a scoreless sixth, Jonathan Holder came out to the mound for the Yankees in the seventh. He would set Boston down in order. Brandon Workman got the call in the bottom half of the inning and tossed a scoreless frame of his own, bringing on Zack Britton for the eighth. The Red Sox got one on there but only sent three to the plate thanks to an inning-ending double play.

Matt Barnes pitched a perfect eighth for Boston, and now they had three more outs to at least tie the game against Aroldis Chapman in the ninth. They got off to the start they needed with Betts drawing a leadoff walk and Andrew Benintendi following that up with a base hit. Martinez killed that momentum right after, though, missing a slider up in the zone and hitting into a huge double play. That left it all up to Rafael Devers, but he’d ground out on the first pitch he saw and the Red Sox dropped another one.

So, the Red Sox will look to get back over .500 and avoid a sweep with a win on Sunday Night in New York. Boston will send David Price to the mound as the Yankees counter with CC Sabathia. First pitch is scheduled for 7:05 PM ET.

Over The Monster https://www.overthemonster.com/2019/6/1/18648981/red-sox-yankees-rick-porcello-gary-sanchez-xander-bogaerts
Categories: Sports