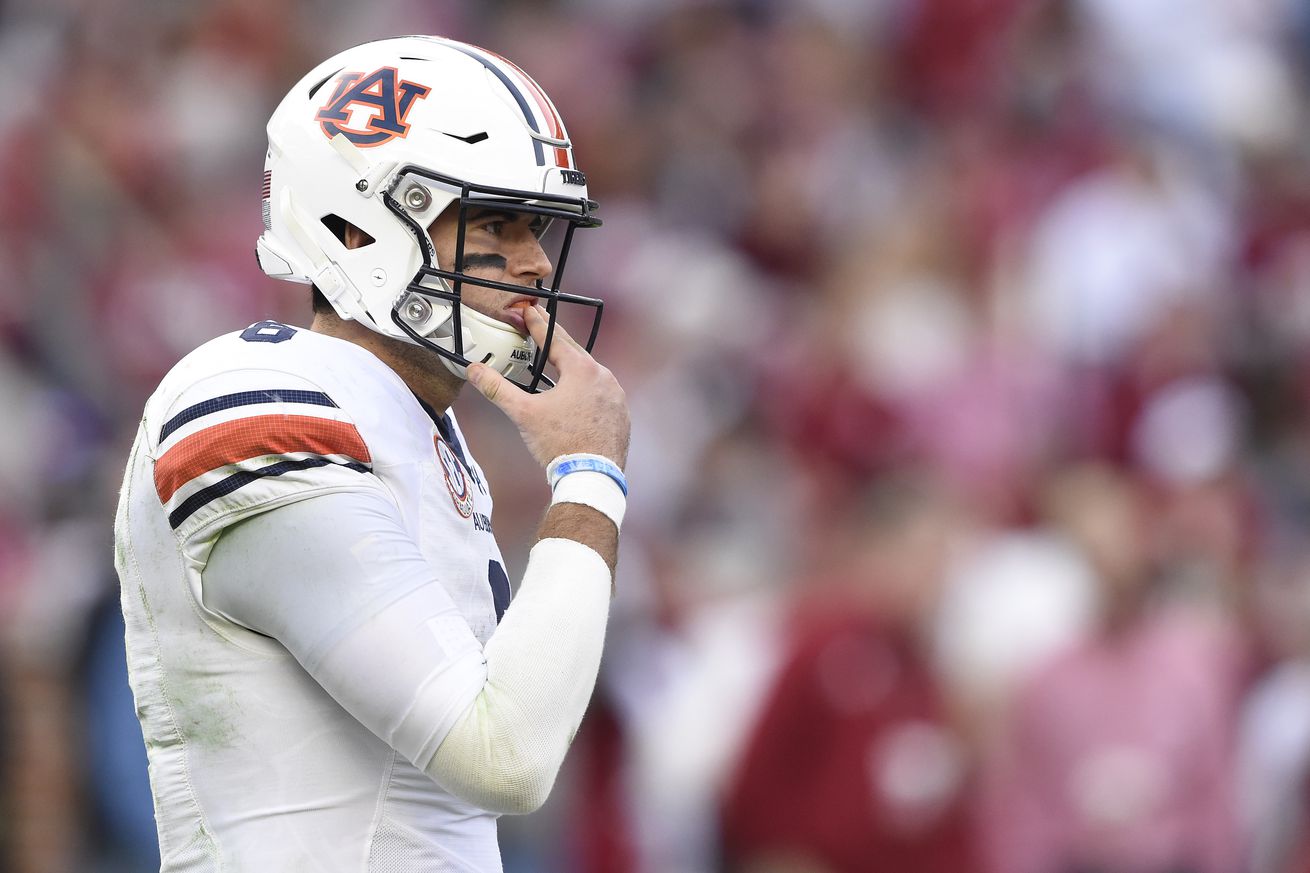 The rookie will likely make the roster, but how will his role look like?

Today, the series continues with one of New England’s draft picks:

2018 review: Jarrett Stidham’s first season at Auburn was quite successful: the transfer from Baylor started all fourteen games and completed 246 of his 370 pass attempts (66.5%) for 3,158 yards (8.5 per attempt), 18 touchdowns and 6 interceptions, while also leading the Tigers to the SEC championship. But even though he showed plenty of promise, he did not reach the same level of performance in his follow-up campaign.

Across the board, Stidham’s statistics went down in 2018 — his second season in the system: starting all thirteen of his team’s games, he threw one fewer pass on the year than he did in the previous season, but saw his completion percentage drop to 60.7% (224 of 369) and his yards per attempt to 7.6 per throw (2,794 yards in total). Not all was bad, though, as he again threw 18 touchdowns and also saw his interception total go down to 5.

All in all, however, he did not display the same confidence during his junior year at Auburn that he did during his 2017 sophomore season. One reason for that might have been the changing cast of characters surrounding him, as well as the fact that he saw a lot put on his plate last year: even though he displayed a solid throwing technique and sound decision making most of the time, he felt to elevate his game when he needed to.

Stidham, who decided to leave school early, did therefore not enter the pre-draft process as one of the top quarterback prospects despite his undeniable but inconsistent qualities. This, in turn, allowed New England to scoop him up on day three.

2019 preview: The Patriots apparently felt that Stidham’s play in 2017 and 2015 — he completed 68.8% of his pass attempts at Bailor that year — was most reflective of who he was as a passer and his long-term outlook at the next level, or else they would not have invested the 133rd overall selection in him. And given his status as a fourth-round draft selection, the 22-year-old can be considered a lock to make the 53-man roster this year.

The main questions regarding the rookie in 2019 will therefore be about his ultimate role on the squad as well as his overall development. Will Stidham, for example, be able to beat out incumbent backup Brian Hoyer to potentially earn the number two role on the team (and by extension maybe even make Hoyer expendable)? Will he be able to perform in the Patriots’ challenging system? Will his already solid technique improve even further?

The answers to these questions will not only determine Stidham’s roster outlook for the 2019 season, but also serve as the foundation for what comes beyond his rookie season. Before getting ahead of ourselves, however, let’s once more focus on the year that lies ahead and how the Auburn product might be used by the Patriots — and how he could fare given the circumstances in combination with his abilities.

Unless he surprises during training camp and preseason, Stidham will likely enter the regular season as New England’s third quarterback behind Tom Brady and Hoyer. As such, he will see most if not all of his action in practice while running the scout team. Of course, the Patriots will use the rookie quite a lot during preseason but you should probably shy away from drafting him for your fantasy teams: don’t expect Stidham to see the field often in 2019.