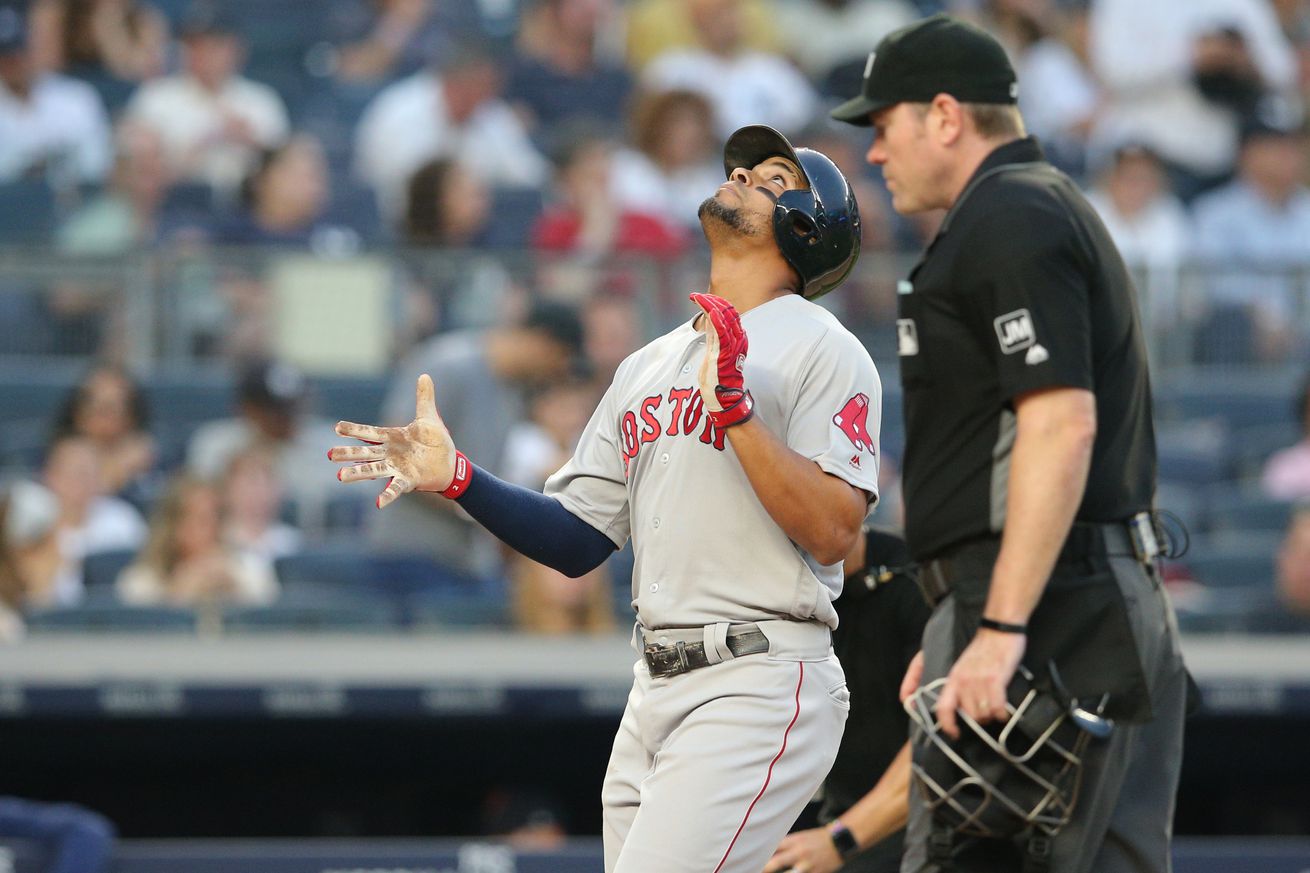 If we can call it that.

The Red Sox were reeling heading into Sunday’s game, dropping four frustrating games in a row, getting all the way back down to .500 and falling to 9.5 games back in the American League East standings. It was crucial for them to stop the bleeding, and quickly. At the same time, David Price was heading into the Bronx where he’s never been able to succeed since putting on a Red Sox uniform. The lefty pitched extremely well, however, commanding the zone for pretty much the entire outing and putting his offense in a position to win. The lineup did their job, too, and while Matt Barnes struggled to adjust to the weather and made the game closer than it should have been, Boston held on for a key victory.

Sunday was the subject of a philosophical question: Is there such thing as a must-win baseball game just two days into the month of June? Given how long the major-league season is, the logical mind would argue no. Then, you look at the American League East standings and the way things have gone for the Red Sox this year, and perhaps you reconsider. I don’t have a good answer for whether or not this Sunday Night Baseball game against the Yankees was a must-win contest for the Red Sox. All I can say is that if it wasn’t must win, a win sure was going to be preferable to a loss. Bold take, I know.

To make matters even more intriguing from a storyline perspective and nerve-wracking from a fan perspective, David Price was on the mound for the Red Sox. We all know his history in Yankee Stadium, pitching to an ERA of almost ten without ever picking up a win in six starts in the Bronx since donning a Red Sox uniform. It’s not great! Combine that with the opposing directions of momentum for these respective teams, and this was all setting up for a disastrous result in New York.

Instead, Price came out and looked dominant for the first third of this game. Generally speaking, Price’s struggles against the Yankees have come right off the bat. It’s pretty much always been clear from pitch number one that it was going to be a rough night, and it always appeared to be a case of struggles snowballing from one rally to a short, killer of an outing. On Sunday, the veteran southpaw took control of the momentum. He came out and tossed a 1-2-3 first inning, then did the same in the second. And then he went out and did the same in the third. In other words, Price was perfect in his first time through the Yankees order.

Meanwhile, the Red Sox were looking to reverse the trend that has seen them struggle in games. The lineup as a whole has been solid this year as games have gone on, hitting most bullpens (New York’s is a different story) and starters the second and third time through the order. That trend has left them with a lot of high-pressure innings early and in the middle of games, though, which was something they were able to avoid at a decent clip in 2018.

In this game, they did struggle to string together rallies for big innings, but they did get to CC Sabathia and pick up an early lead. It started right in the top half of the first, too, as J.D. Martinez came up with two outs and was sitting on an inside cutter. Sure enough, Sabathia threw a flat one right at the belt, and Martinez turned it around and sent it out to the left field seats. Just like that, it was a 1-0 lead for the Sox.

They kept it going in the second, when Christian Vázquez started things off with an infield single. Michael Chavis then came through with a base hit of his own to put runners on the corners for Eduardo Núñez. On the one hand, Núñez did come through with a single through the right side to extend Boston’s lead to two. On the other hand, he made a bad baserunning mistake getting deked on a throw into third base that was cut off, eventually getting cut down at second base for the second out. What could have been a nice rally resulted in just the one run. Boston would grab one more run in the fourth when Xander Bogaerts blasted a leadoff homer out to left field.

Then, in the bottom of the fourth, Price’s dominance started to wane. He got the first out to make it ten in a row, though this one was thanks to an impressive play in the hole by Rafael Devers to rob DJ LeMahieu of a single. That would turn out to be a big defensive play, because Luke Voit came up next and crushed an inside cutter for a solo home run, breaking up the perfect game, no-hitter and shutout with one swing of the bat. The hard contact kept coming, too, with Gary Sanchez and Aaron Hicks both putting good swings on the ball for back-to-back singles. After Gleyber Torres poked one that found a hole on the left side of the infield, the Yankees had bases loaded with just one out. Gio Urshela worked a very tough at bat, eventually hitting a deep fly ball to center field to bring New York to within one. With runners on the corners, Clint Frazier had a chance to at least tie it up, but New York bailed Price and the Red Sox out with some poor baserunning. Torres tried to steal second, which in turn caused Hicks to break for home. Boston caught the latter in a rundown, eventually tagging him out to end the rally with the lead still in hand.

From here, we fast-forward to the top of the sixth with the score still 3-2 in favor of the Red Sox and Boston looking to add to that lead. They appeared to have a good chance at that when Andrew Benintendi and Martinez kicked things off with back-to-back singles, but then things took a turn. Bogaerts struck out, and then Devers did the same. For an added bonus (or opposite of that), Benintendi tried to steal third on the strike three to Devers for….reasons. He was thrown out, and the inning was over.

When we got to the seventh, the Yankees had to turn to their bullpen. They’d used their big guns in each of the first two games, so they turned to Luis Cessa for this inning in the one-run game. The Red Sox liked him better. Vázquez started this one off with a walk, and after a fielder’s choice swapped him out for Chavis at first base, Núñez came through with a good swing again. Chavis was off on the 3-2 pitch and Núñez put it into right field. Chavis was pretty much guaranteed third base, but Clint Frazier was thinking about making the throw. Instead, he let the routine ball get by him and all the way to the wall, allowing Chavis to score easily and Núñez to get all the way to third base. That latter part would be important as it drew the Yankees infield in, allowing Brock Holt to place a bloop right over LeMahieu’s head at second base, scoring another run. With two outs and Holt still at first, Benintendi hit a liner into right field. Frazier once again made a mistake, this time making a poor decision to try a diving catch. Instead, he came up short, let the ball bounce way away from him towards center field. That allowed Holt to come around to score, and Boston’s lead was up to four.

So, Price came back out to work with a 6-2 lead in his favor for the bottom of the seventh. The Yankees got off to a nice start against the southpaw, though, putting two singles through the left side with just one out mixed in. That would end the night for Price, who was very good on the whole but left two runners on base for Heath Hembree to clean up. He did just that, getting a strikeout before Chavis made a huge diving play at first base to save at least one run and end the inning.

After the Red Sox added two more, in part thanks to another misplay from Frazier, Matt Barnes came on for the eighth in an 8-2 game as rain started to pour down. The righty was clearly struggling to grip the ball in the rain and walked the first three batters he saw. After a delay for the grounds crew to clean up the mound, Barnes balked in a run to make it 8-3. He’d finally get his first out on a grounder to first base that bounced off the bag but right to Chavis at first base. It did score a run, though, cutting the lead to four. Barnes then got a fly out for the second out of the inning, but again it scored a run and it was now 8-5 in favor of the Red Sox.

That three-run lead held into the ninth, where Brandon Workman came on to try and close it out. He started his outing with a ground ball up the middle. Bogaerts’ only play was a bare handed attempt, but his throw got away allowing Frazier to get to second base to start the frame. Workman came back and got two quick outs after that before the top of the order came back up. LeMahieu made the third out, though, grounding out to first and ensuring the Red Sox would avoid the sweep.

The Red Sox have the day off on Monday following this win, though the front office will be working with the MLB Draft kicking off. As for the players and coaches, they’ll be back in action on Tuesday in Kansas City where Eduardo Rodriguez will take on Glenn Sparkman. First pitch is scheduled for 8:00 PM ET.

Over The Monster https://www.overthemonster.com/2019/6/2/18649885/red-sox-yankees-david-price-xander-bogaerts-jd-martinez-michael-chavis
Categories: Sports