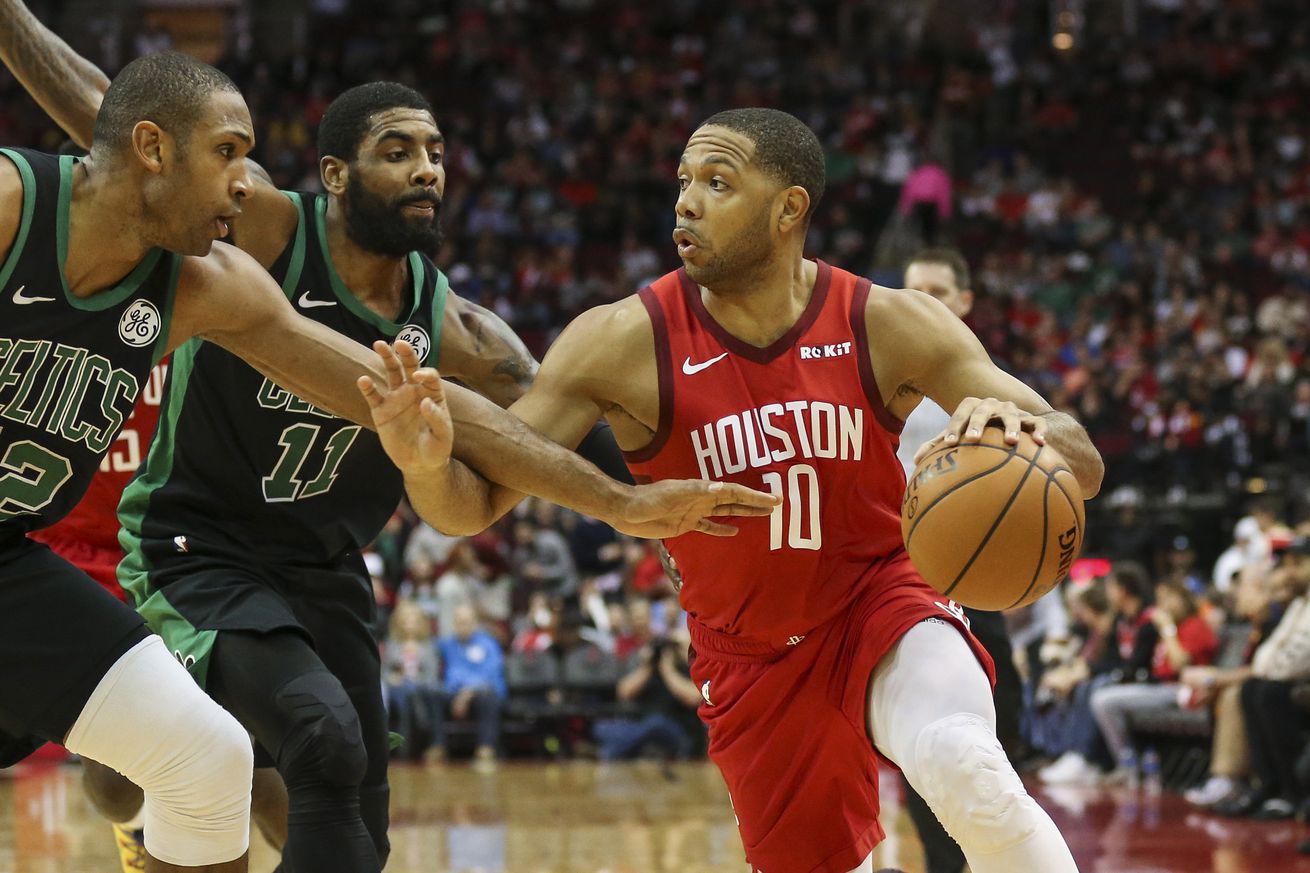 The Celtics, Rockets, and Pelicans could all help each other reload for next season.

The Houston Rockets are at a crossroads much like the Toronto Raptors were last year. They have a strong regular season team that looks to be perennial contenders in the playoffs, but they also know this group doesn’t have enough gas to win a title. If the current squad can’t take down the Warriors’ core of Curry, Thompson, and Green (who look to be among the few on that roster to actually return next season), then it’s time for some change. As the famous saying goes: when the going gets tough, give up and find new players.

First of all, I don’t think Harden is off limits. Daryl Morey worked for the Celtics right when Danny Ainge was hired. Ainge quickly showed that he didn’t care what people thought about him when he traded crowd-favorite Antoine Walker and later, Paul Pierce and Kevin Garnett. Morey holds Ainge in pretty high regard, calling him the best negotiator in the business on multiple occasions, including this quote from 2015:

”He’s probably the best GM in the game,’’ says Daryl Morey, who became GM of the Houston Rockets after working with Ainge at the Celtics. “Look at the roster in ‘03 when Danny took over, and his ability to win a title five years later — that transformation is unheard of, I’ve never seen anything like it. Now you look at the way he’s set up the Celtics today, and it’s the best I’ve seen someone go from losing a core to creating lots of future picks and flexibility to turn it around quickly. People don’t see it yet because it hasn’t turned the corner, but they will see it.’’

Ainge has built and rebuilt the Celtics in large part by trading our favorite players away. Does that mean I think Harden is in the mix for us? No, but so long as the Celtics have a trove of assets to work with, they’ll be tied to any trade rumor. So, who might they want from Houston?

Eric Gordon fits what the Celtics need perfectly, but only has one year left on his deal. Clint Capela has one of the most team-friendly contracts in the league, but has struggled in the playoffs. Chris Paul is getting paid – checks notes – $70 billion (don’t fact check this) over the next three leading into what will his 17th professional season.

Personally, I wouldn’t want to give up young assets for any of those guys. However, a lot of trade ideas floating around these days include dangling Gordon Hayward in front of teams to see who’ll take a gamble on him. It’s a hard sell, but if it’ll get Houston off the Chris Paul contract, they’d have to at least consider it, right?

Also, do the Pelicans want anyone from Houston as part of an Anthony Davis package? (Is Houston going to trade for AD?!) Capela’s deal is excellent trade fodder, and Houston would probably field a wide range of offers to get off the Chris Paul contract if the price is right. Here’s a potential scenario between Houston, Boston, and New Orleans that’s a little wild, but could accomplish some goals for each team:

Houston: This gets them off the Chris Paul contract and onto a Gordon Hayward rehabilitation project. They might not like the risk, but it could beat paying Chris Paul $44 million in 2022. It also gets them Jrue Holiday, a fantastic two-way guard with crucial experience playing on and off the ball, who could likely gel with Houston’s notably guard-dominant system. I’m not sure why Houston would want drastic change after coming so close to the Finals two years in a row with the same core of players still under contract, but with an apparent power struggle between Morey and ownership, a shakeup seems inevitable. The Rockets definitely need a shakeup – I’m just not sure if that calls for a complete overhaul.

Pelicans: New Orleans would likely ask for some first-round picks in the trade, and Boston would be happy to give them up (reminder: Houston has no draft picks this year). New Orleans has almost zero chance of walking away as losers in this trade. If Paul can make them competitive in the short term, great! If not, they can develop their young players and build around Zion. Capela’s contract is extremely tradeable, meaning his acquisition wouldn’t be a strict commitment to build with him as a core player. Should another star demand to be moved, Capela could be added to sweeten any trade package. Finally, Tatum has room to grow, but without the pressure of playing in Boston. Even if he stagnates, you’ve got a reliable starting-caliber player who can get you 15-20 points and play some solid defense. Oh, and draft picks. They’re a crap shoot, but you can never have too many.

Boston: Oh boy. I don’t like the idea of giving up on Hayward and trading a good, young player for two guys with one year left on their contracts. However, the nucleus of Marcus Smart and Al Horford would still be intact, Kyrie could be convinced to re-sign, and, most importantly, my favorite son Jaylen is still on the team.

Typically I wouldn’t panic over the looming possibility of players leaving as unrestricted agents because Boston has a good track record with retaining them, but taking that gamble twice in one off-season seems risky, especially with so many players having a “preferred destination” lists with dubious levels of honesty attached to them (teams with cap space can be listed purely for leverage, making lists misleading).

I won’t reiterate the value of AD for the 1,000th time, but I’ll say that Eric Gordon is exactly the type of shooting guard the Celtics have needed for the past couple years. Despite the narrative that Boston could realistically run lineups with five good-to-great three-point shooters, one of their top priorities is finding a deadeye from deep who can play off the ball. Brad Stevens has proven his schemes can hide the defensive shortcomings of any guard, so I’m not worried about the fit there.

Eric Gordon walking away wouldn’t be back breaking. Davis leaving after one year would be pretty rough though. Again, I don’t like the risk since I still believe in both Tatum’s development and Hayward’s recovery, but it’s worth exploring possibilities to gear up for a strong run next year. We’ll know more after this summer, but there are realistic scenarios where Toronto, Milwaukee, and Philadelphia all lose key players to free agency, leaving no clear favorite to come out of the conference (again).