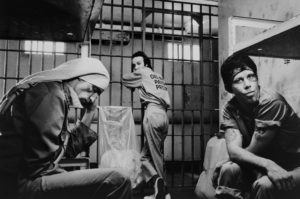 Let me pose to you this question: if you were imprisoned, would you dare try to escape?

Jim Jarmusch is a massively influential figure in independent filmmaking. Known for his quirky, out-of-the-box characters and dialogue, his films are never anything you want to miss seeing on the big screen if given the chance.

Down By Law is a little-known 1986 black-and-white film starring American musicians John Lurie as Jack and the ever-enticing Tom Waits as Zack, two men—one a pimp, the other a DJ—who are incarcerated in a gritty New Orleans jailhouse for a crime they didn’t commit. They are  soon joined by loquacious Italian Roberto (played by then-unknown Roberto Benigni, who would 11 years later go on to make his poignant Academy Award-winning film, Life Is Beautiful).

Roberto, despite being the only guilty one of the three—he claims he accidentally murdered a man in self-defense with a pool ball—is the one with the most heart and innocence to his character, and he steals the film. While he gets on Jack and Zack’s nerves initially (as well as each other’s), he manages to wedge himself between the two, and his optimistic attitude brings the ragtag trio together. One of my favorite scenes is when Roberto, who struggles endearingly with his English throughout the film, draws on the cell wall. When Jack asks him what he is doing, he simply states he’s making a window, but to excuse his poor, heavily-accented English—would you say ‘I look at the window,’ or ‘I look out the window’?

“Unfortunately, Bob,” Jack mutters, circles under his eyes and an annoyed look on his face, “you’re gonna have to say you look at the window.” 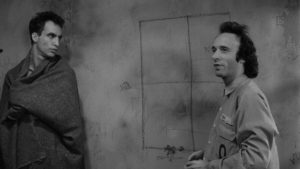 Roberto conjures a plan to escape from the prison together, and, miraculously, his plan works. The trio scramble through the swamps of New Orleans with dogs and cops hot on their case, but they manage to stick together and not leave each other behind, despite their occasional bickering that almost causes them to go their own ways. When Roberto finds a house on the side of the road and an equally as enthusiastic Italian woman inside of it (Benigni’s future wife and co-star of Life Is Beautiful, Nicoletta Braschi), things begin to look up for the three, and they realize they may have escaped a fate worse than life in prison.

The film is a simple narrative of friendship, of how certain situations can force one upon people, and it’s endearing as hell. Lurie, Waits, and Benigni have this electric chemistry between them that just works. The two sulking and embittered Americans, contrasted with Benigni’s optimistic and chattery Italian, give the film heart. You root for these men, and you want them to succeed. You stick with them throughout the film, knowing that they’ll eventually go their separate ways, and when they do, it’s going to be bittersweet to watch.

Packed with stunning black-and-white scenes of the bayous of Louisiana, Jarmusch expertly paints a stunning picture of the deep south. To accentuate the beauty of the landscape, the soundtrack (which was curated by Lurie) is brimming with songs that were influenced by the culture of the south, such as “Jockey Full Of Bourbon” by Waits and “It’s Raining” by Irma Thomas. Its soulful, R&B-infused soundtrack perfectly punctuates the film and only adds to the atmosphere.

Down By Law is a rare find that you don’t want to miss.

The post Down By Law (1986) dir. Jim Jarmusch appeared first on BOSTON HASSLE.