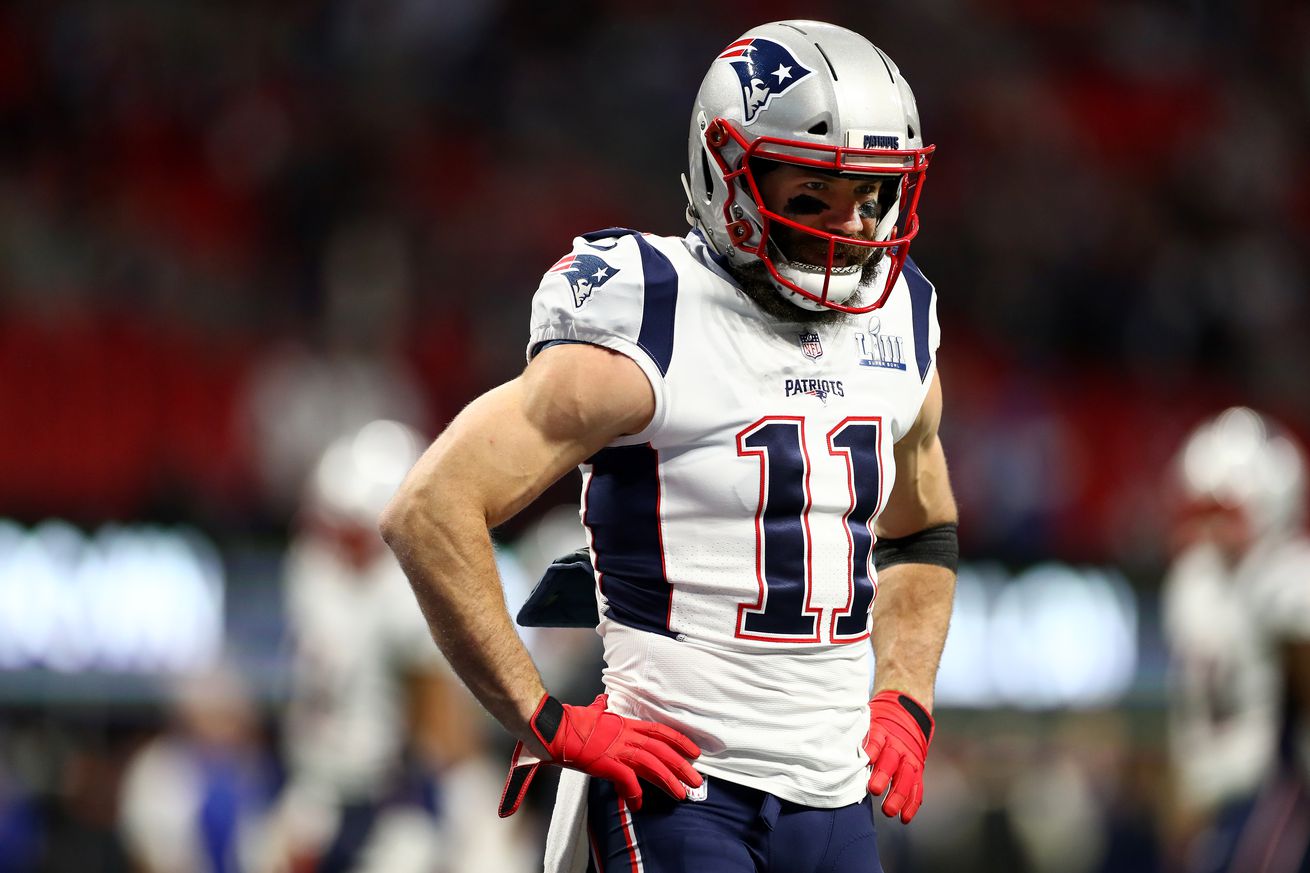 With Gronkowski gone, Edelman will be even more important moving forward.

The New England Patriots, who kick off their 2019 mandatory minicamp today, currently have the maximum of 90 players on their active roster. However, only 53 of them will be able to survive the cutdowns on August 31 and ultimately make the team. Over the course of the summer, we will take a look at the players fighting for those spots to find out who has the best chances of helping the Patriots defend their Super Bowl title.

Today, the series continues with the most experienced wide receiver on the team.

2018 review: After missing the entire 2017 campaign due to a torn ACL suffered in preseason, Edelman’s return to the Patriots had to be postponed. While he did participate in offseason workouts, training camp, and New England’s exhibition games, his regular season debut did not come until week five: the veteran was suspended for the first four games of 2018 following a violation against the NFL’s policy on performance-enhancing drugs.

Despite coming off the suspension and a year-long rehabilitation process, however, Edelman did not show any rust when he returned to the gridiron against the Indianapolis Colts. In his first game back, he was on the field for 69.6% of the Patriots’ offensive snaps and finished the game with 7 catches for 57 yards. More importantly, Edelman again filled the role he held since becoming a starter in 2013: Tom Brady’s go-to guy and safety blanket.

As such, the veteran appeared in all of the regular season contests he was allowed to participate in. Playing a career-high 87.5% of the Patriots’ offensive snaps over that twelve-week span, Edelman reestablished himself as a reliable and versatile weapon, and New England’s top wide receiver: he finished the regular season with 74 catches and six touchdowns, while also registering 850 receiving yards — most on the team despite missing a quarter of the season.

The Patriots did also not shy away from taking advantage of Edelman’s versatility again. He carried the football 9 times for 107 yards, and — being a quarterback in college — was also asked to attempt two passes: both were completed and gained a combined 43 yards. On top of it all, he also saw regular action on special teams and returned 20 punts during the regular season for 154 yards (7.7 yards per attempt).

As well as Edelman played during the regular season, he saved his best for last: the playoffs. During the Patriots’ three postseason games, he elevated his play to another level and showed why he truly is one of the most clutch wide receivers in league history. The numbers — Edelman caught a combined 26 passes for 388 yards while also carrying the football twice for 15 yards — do not tell the whole story of his performance, though.

Against the Los Angeles Chargers, he finished with a season-best 151 receiving yards. One week later, in the AFC Championship Game against the Kansas City Chiefs, Edelman caught two 3rd and 10 conversions on the Patriots’ game-winning drive in overtime. And in Super Bowl 53 against the Los Angeles Rams, he was the best offensive skill position player on either side: his 10-catch, 141-yard performance earned him MVP honors — making him the first wide receiver to win the trophy in ten years.

All in all, Edelman’s 2018 season can be seen as a microcosm of his entire career: a story of perseverance, versatility, and — ultimately — success.

2019 preview: Three months after the Super Bowl, the Patriots and Edelman agreed to a two-year, $18 million contract extension that will keep the wide receiver with the club through the 2021 season. The deal also slightly increased his 2019 salary cap hit to $6.08 million — the highest among New England’s pass catchers and as such reflective of what his role this upcoming season will look like: Edelman will again be a key cog in the Patriots’ offensive machinery.

In fact, he might be even more important to the team in 2019 than he already was last season. Tight end Rob Gronkowski decided to retire in late March, after all, leaving Edelman as the by far most experienced downfield threat on the Patriots’ roster — and a player Tom Brady might look for quite regularly while a chemistry with the weapons acquired over the course of the offseason is still developing.

Don’t be surprised, therefore, if Edelman is again on the field for more than 80% of New England’s snaps and ultimately finishes the season among the team leaders in receptions, yards, and touchdowns. Undoubtably, the 33-year-old, who might once more be used as a punt returner as well, is one of the most valuable players on the Patriots’ roster due to intelligence, experience, and connection with Brady.

In a year marked by considerable personnel turnover, those traits will become immensely important yet again for the Patriots offense.