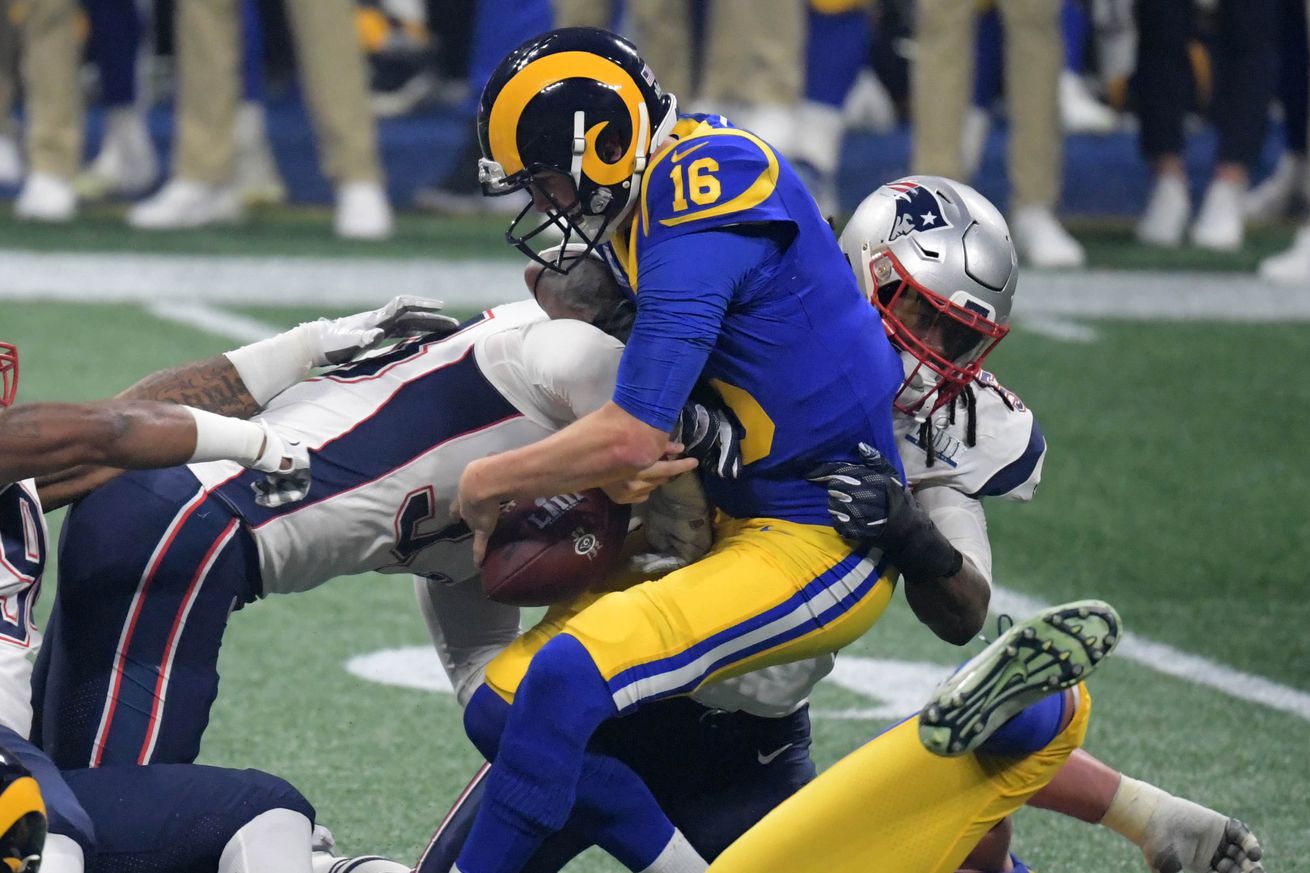 Goff recently spoke about the Super Bowl, and playing the Patriots.

Of the 106 teams that appeared in a Super Bowl to date, only two failed to score more than three total points. One of them are the 2018 Los Angeles Rams, who were beaten 13-3 by the New England Patriots in early February. The NFC champions, who had averaged 32.9 points per game during the regular season, simply failed to get into a rhythm and string plays together against a defense playing a historically good game.

One reason for that was the performance of quarterback Jared Goff, who completed just 19 of 38 pass attempts for 229 yards with a costly fourth-quarter interception. The Patriots knew that getting Goff and his signal caller — Rams head coach Sean McVay — out of their comfort zone was a key to the game, and they were able to do just that by disguising pre-snap looks and calling numerous pressure packages out of their amoeba front.

Four months removed from the Super Bowl, Goff opened up about his experience on the game’s biggest stage — and about what he and the Rams would do differently if they got a chance for a rematch with New England. “They’re so unique in that they change weekly in what they’re doing,” Goff said. “I think for me personally, if we were play them again, or any team that’s similar to them that can do that, you have to be able to adjust on the fly a little bit quicker.”

“As opposed to waiting for something to happen, you have to actively adjust to what they’re doing, and adjust to what a team is trying to present to you, whether it’s something they showed on film or not,” the 24-year-old told Sports Illustrated’s Albert Breer when discussing a potential key to beating New England. A lack of urgency and aggressiveness certainly was one of the factors that doomed a Rams team that held its own against the Patriots for much of the Super Bowl.

“The fact that our defense played the game they did, and Wade [Phillips] coached the way he did, all the plays we made — we got an interception on the first [pass] of the game — and offensively, and me personally, we weren’t able to hold up our end, that’s what really bothered me,” Goff continued. “At this point, late May, early June, I’m able to move past that, and you’re on to the next step of your career and your life. But for a while there, that was the big sticking point in my head.”

Until the fourth quarter, the Super Bowl was a close affair. New England was unable to put more than three points on the board despite dominating the field position game, while the Rams failed to capitalize on the Patriots’ mistakes. In the final period, however, Tom Brady and company finally hit their stride — and when the Rams were forced to answer the game’s first (and last) touchdown drive, they couldn’t.

Down 10-3 with seven minutes left, Goff led L.A. to the Patriots’ 27-yard line but ended the series when he threw what was essentially a game-ending interception on a desperation heave. New England was then able to essentially run out the clock and go up ten points on a field goal that left only 1:12 on the clock. Another score was not in the cards for Goff and his team, however, and the game ended after a missed 48-yard field goal attempt by the Rams.

“I went back and watched it the day after,” said Los Angeles’ quarterback about his first Super Bowl. “Postgame, tried to treat it like any other game where you’re evaluating yourself. […] And yeah, it took longer than a regular game to move on from, because there wasn’t a game after it to fix what you’d done in the previous game. But it’s part of the process. Every year there’s a team that goes through this. This year it’s us.”

Last year, it was the Patriots and they responded in style by winning their third title in the last five years. For the Rams to do the same, they need to learn from their title game defeat — and apply the lessons in case they run into New England again. But, of course, no two Bill Belichick-coached teams are alike…