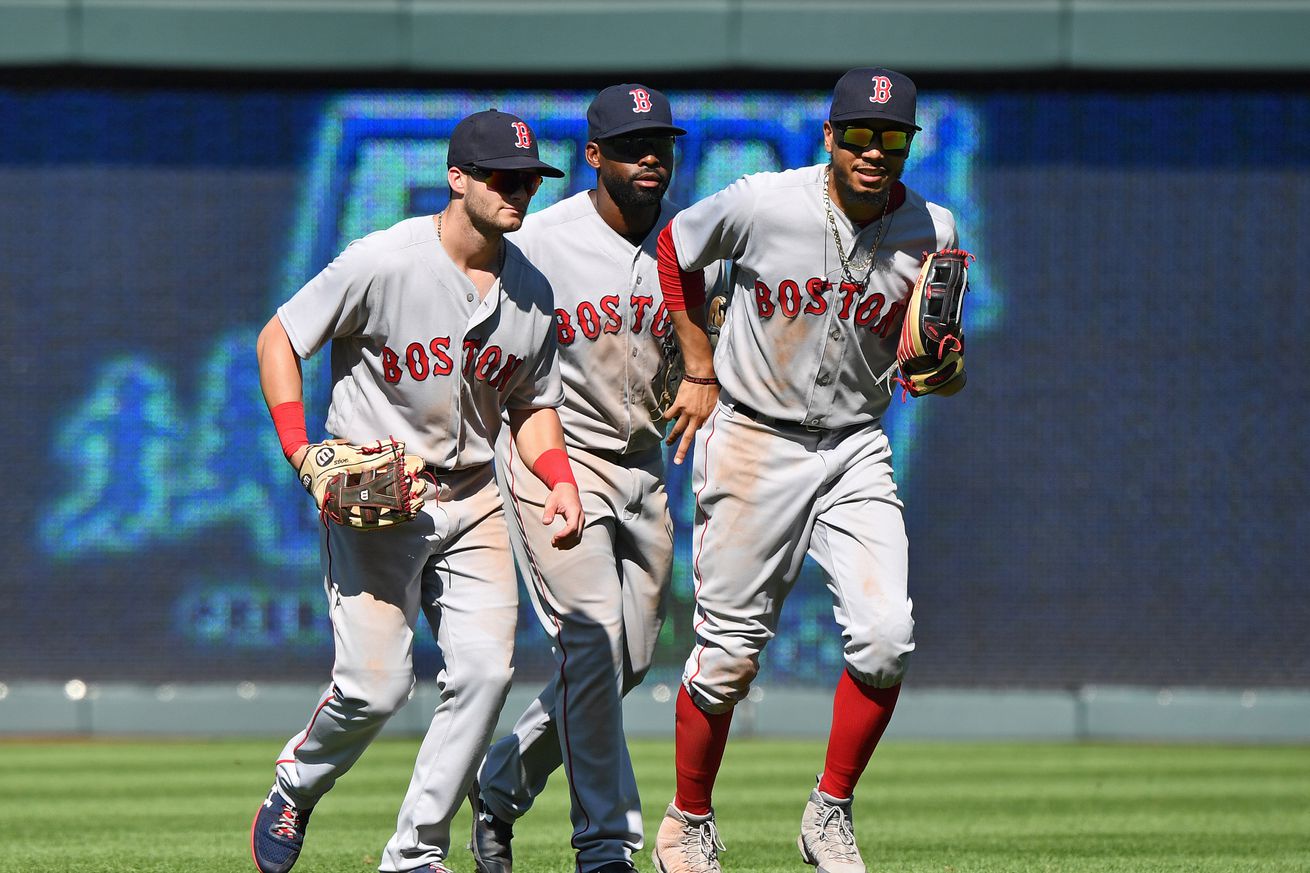 A look ahead to three games in Kansas City.

The Royals are firmly in the middle of another rebuild and currently find themselves among the worst teams in baseball, thanks largely to their poor pitching.

Down. The Royals haven’t really had many points of the year in which they’ve trended upwards, to be fair, but they are in a particularly bad way over the last couple weeks. In their last three series they’ve won a combined two games, losing two of three to the Yankees, getting swept in a three-game set against the White Sox and most recently dropping three of four to the Rangers.

Rodriguez was originally slated to start over the weekend in New York, but the rainout on Thursday allowed them to push him back to this game in Kansas City. The lefty is coming off a strong start his last time out in which he allowed just a single run against the Astros, but he did allow eleven runs combined in his previous two. It’s been an extreme rollercoaster of a year for Rodriguez, but he was rolling a bit before that hiccup in the middle of May where he allowed those eleven runs over two starts. Kansas City gives him a chance to pick up where he left off in Houston and get on another roll. He did struggle against Kansas City in his one start against them last year, allowing five runs over just four innings with six strikeouts and three walks.

Sparkman has found himself on the fringe of the Royals roster since last season, making a few spot starts here and there but mostly throwing out of the bullpen. This season he’s made eight relief appearances and two starts, with the two starts being about as different as possible. In his last time out he only recorded three outs and allowed one run. However, at the start of the month he tossed seven shutout innings against the Rays. Overall, though, the righty has not really impressed in his career. Sparkman has 65 innings under his belt across three partial seasons and has pitched to a 5.26 ERA with a 4.22 FIP and a 5.94 DRA. His flyball tendencies can lead to some home runs when he’s not on, and he doesn’t miss a ton of bats though his control is solid most of the time. Sparkman will feature a low-to-mid-90s fastball along with a curveball and a changeup. Last year, the Red Sox scored three runs off the righty out of the bullpen in just 1 2⁄3 innings.

The Red Sox ace was rolling through the end of April and into May, but over his last three starts he has looked a bit more human against very tough competition. Granted, Sale has not been terrible in three starts against the Astros and Yankees, but he’s been a little more hittable than we’d like to see. A matchup against a Royals team with a solid, but not really intimidating offense is a good chance to get back on track. The southpaw struck out at least ten batters in five of his six starts in May, and has done so in six of his last eight overall. Last season, Sale started two games against the Royals and allowed just three runs (two earned) over 13 innings with 18 strikeouts and three walks.

Junis has been a solid pitcher for a couple of years now, but he’s been unable to put it together and take the next step to this point. The righty can get a decent number of strikeouts with a little over eight per nine innings in each of the last two years while sporting decent control. However, he loses command a little too often which leads to hard contact and home runs. He was a little better in the month of May, to be fair, but he still allowed multiple homers in three of his six outings. Junis did have success against the Red Sox last season in their one meeting, allowing just two runs over six innings of work. The 26-year-old will feature a pair of low-90s fastballs along with a slider he throws nearly half the time.

The Red Sox have not yet announced their starter for Thursday’s series finale in Kansas City. They have a few different options here. They could stick with their normal rotation of late, which would five Ryan Weber another shot after imploding in his last outing. They could also turn to Mike Shawaryn for his first career start. Or, they could go with Rick Porcello on regular rest. This is pure speculation, but I’m guessing it’s going to be one of the first two options unless they lose each of the first two games.

Just a couple of years ago it appeared Duffy was emerging as one of the better starting pitchers in the American League, coming on strong in the rotation in the second half in 2016 before continuing that success through the 2017 season. Then, the southpaw didn’t quite make it through a full season last year and when he was on the mound he was very underwhelming. Duffy was still striking out batters at a solid rate, but his command took a major hit and it led to a below replacement level season by Baseball Prospectus’ DRA-based WARP. He’s come back this year looking a little better with a 4.05 ERA, a 3.96 FIP and a 5.23 DRA over seven starts. Last year the Red Sox smacked ten hits and scored five runs off Duffy over 6 2⁄3 innings. The lefty will feature a fastball in he 90-93 range along with a pair of breaking balls.

Whit Merrifield has been one of the more consistent hitters in the American League over the last couple of years, using strong bat-to-ball skills along with good speed to put up high averages. This year, he’s doing even better by adding in above-average power.

Aldaberto Mondesi is extremely aggressive at the plate but when he makes contact it’s very often good. He is also one of the speediest players in the game.

Alex Gordon is having a renaissance season, hitting the ball with more authority than he has in years while also cutting his strikeout rate down well below any other point of his career.

Jorge Soler won’t walk much and will strike out a bunch, but he has the ability to hit it a long way whenever he does make contact.

Nicky Lopez has been hitting at the top of Kansas City’s lineup lately, and he will put the ball in play most every time he comes up.

Martin Maldonado is struggling to hit the ball hard this year, but he’s in this league more for his defense behind the plate than his skills with the bat.

Ryan O’Hearn is drawing a lot of walks this year but struggling to do much else.

Billy Hamilton is known mostly for his speed and his defense, and there’s good reason for that.

Cheslor Cuthbert just recently got called up after a solid start to the year at Triple-A.

If we’re being honest, the Royals bullpen is mostly one big shrug emoji. Ian Kennedy probably has the top spot right now. The former starter is thriving out the bullpen, striking out over ten per nine while walking fewer than two.

Jake Diekman is having the best season of his career as the lefty is striking out more than 13 per nine and inducing a bunch of weak contact.

Brad Boxberger has been coming on strong after a brutal start to the year, pitching to a 2.19 ERA with a strikeout per inning over his last 12 outings, though his control still isn’t great.

Hunter Dozier is off to a big start to his 2019 season but was placed on the IL just before this series gets underway with a chest injury. He shouldn’t be out too long.

Salvador Perez was forced to undergo Tommy John surgery before the season started and the franchise’s most famous player is going to miss the entire season.

Lucas Duda went down a little over a month ago with a back injury and the hope is that he’ll be back soon.

Jesse Hahn had elbow surgery late last summer and the hope is that he can start working his way back some time this month.

Trevor Oaks underwent hip surgery before the season started and could miss all of 2019.

Eric Skoglund is currently serving an 80-game suspension after failing a PED test.

It could be an iffy week weather-wise in Kansas City, with thunderstorms in the area all week. It’s hard to pin down right now when the weather is expected to hit, but I’d anticipate at least one delay, if not a full-on postponement.

Over The Monster https://www.overthemonster.com/2019/6/4/18651295/red-sox-royals-series-preview
Categories: Sports