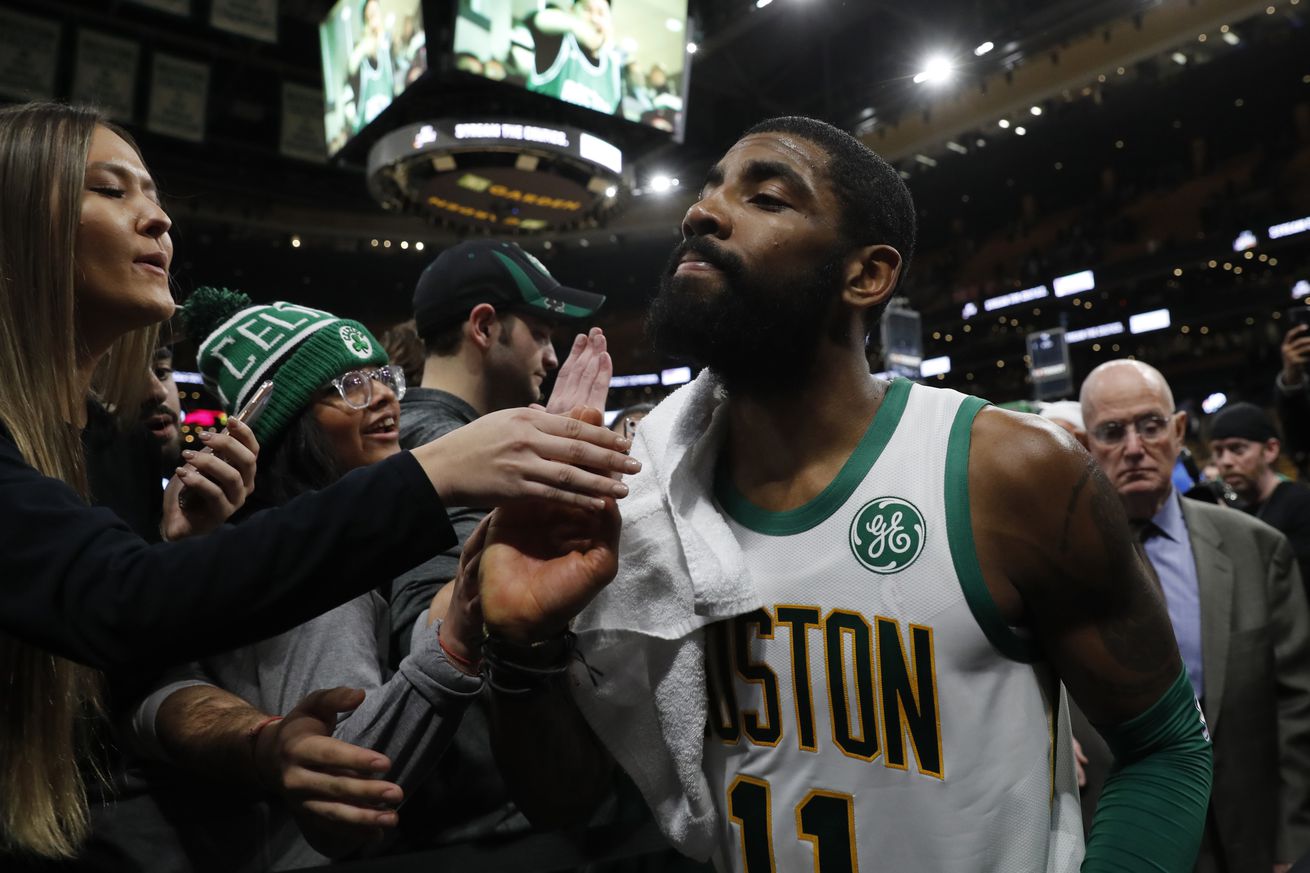 Over the past week here at CelticsBlog, we’ve been recapping the best individual performances for each player on the Celtics’ roster this season. We started with the players buried a little deeper on the bench (with a heavy dose of Game 82 against the Washington Wizards), then headed onto the team’s more crucial rotation players.

Now, we’ve come to the end of the line with the final four players on the roster: two max contracts, one super-prospect and a polarizing superstar point guard. Let’s get to it.

Apologies to his two massive games against Minnesota and the game-winner against Sacramento, but Gordon Hayward’s comeback season reached its apex during Boston’s 33-point dismantling of the Golden State Warriors in March.

First, rewind back to January. The Celtics fell to the Warriors, 115-111, in the first of their two meetings this season. Hayward missed all five of his shot attempts on the night, scoring just two points at the free throw line and finishing as a -8 in a narrow loss. It was the fifth time in the Celtics’ previous seven games that he’d failed to score in double-digits. After the game, an anonymous Warriors player expressed some strong feelings on Hayward’s recent performance: “Listen, Gordon Hayward is not Gordon Hayward right now,” the player told Stadium’s Jeff Goodman. “He’s hurting [them]. He’s a liability on both ends of the court.”

As the dust settled on Hayward’s 30-piece at Oracle Arena two months later, then, there was a little bit of extra satisfaction in the air. The Celtics ran the reigning champs out of the gym that night, and Hayward’s performance was at the center of it all, putting together his most dominant performance of the year against some of the toughest competition in the league.

In just 27 minutes, Hayward piled up 30 points, seven rebounds and four assists and showcased the full depth of the skillset that Boston paid for in the first place. He gave the Warriors a little bit of everything in his repertoire, scoring from all three levels with efficiency while helping to keep the ball moving (the Celtics dished 38 assists) and keeping himself active on defense.

The exclamation point on the performance came late in the third quarter, intercepting an ill-fated pass from Kevin Durant and taking it all the way to the house. Hayward’s dunks were always cause for celebration this year, and this may have been the biggest one he threw down.

Hayward may have ended his season on a poor note with his generally flat performance in the postseason, but we knew all along that his comeback was going to be a long process. Rehab for the kind of injury he sustained doesn’t end when you make it back to the court, and there were always going to be highs and lows. Performances like this were a reminder — both to fans and to Hayward himself — that better things could be on the horizon for the All-Star forward.

The most common evaluation of Al Horford on this Celtics team was that, while he might not be the team’s best player, he’s likely the most important. His role as both an offensive and defensive hub is one that no other Celtic — and few other players in the entire league — can replicate. After a slow start brought on by a nagging knee injury, Horford spent this season proving that value, and it was most prominently on display in Game 1 against the Bucks in the Eastern Conference Semifinals.

The Celtics may have met their end in ignominious fashion against the Bucks, but at least for one game, they looked like they might not go out without a fight. On the back of a 36-21 third quarter, they handed the Bucks a 25-point loss in Milwaukee, in one of the most dominant displays we saw from this team all year long. The mythical “Playoff Horford” was instrumental to this effort, both for his scoring contributions and for anchoring the metaphorical wall in the paint ahead of MVP candidate Giannis Antetokounmpo.

Milwaukee’s bigs have traditionally struggled to contain Horford in the paint, one of many issues they set out to address with acquisition of Brook Lopez this off-season. Well, they succeeded in that regard… at the expense of surrendering a barrage of long range jumpers. The Celtics strung the Bucks out off of picks and forced their frontcourt to chase Horford out to the perimeter, where he proceeded to surgically pick them apart. Seven of his eight baskets for the night came from 18 feet or further from the basket.

The other end was where Horford made most dramatic impact, almost entirely because of his effect on Antetokounmpo. The Greek Freak struggled through one of his least effective games of the season, shooting just 7-of-21 from the field and finishing a staggering -24 for the night. Everywhere he went, Horford was right there with him, and the extra physicality clearly knocked him out of rhythm. It was the first time the Bucks had been really tested in the postseason this year.

As we know, the Celtics would ultimately not be able to sustain their momentum as the series continued. For that one game, though, they gave us a glimpse of what they were capable of at their apex and — as usual — Al Horford was at the center of it all.

Statistically speaking, there are probably quite a few games from Tatum’s sophomore season that stand out perhaps a little more than this one. After all, he finally broke the 30-point barrier in the regular season against Brooklyn, and he’s certainly stuffed the box score quite a bit more than this. Those games didn’t happen in the playoffs, though, and I think the elevated stakes push this one ahead.

The most remarkable thing about Tatum’s first two NBA seasons has been his performance in the playoffs. The spotlight has never seemed to phase him, and he’s stepped up to the plate when the team has needed him most. We all remember the improbable run to the Eastern Conference Finals two seasons ago, culminating in the dunk on LeBron. While he may not have had a stand-out moment on quite that level, he was nonetheless still very effective this postseason.

The story of this one is pretty simple: the Pacers simply could not keep Tatum away from the rim. Regardless of whichever wing they assigned to him — and despite the presence of NBA blocks leader Myles Turner — whenever Tatum put the ball on the court, he got to the rim at will. Again, and again, and again.

This is the kind of aggression you want to see from Tatum more consistently. He’s a crafty shooter, sure, and his midrange jumper isn’t necessarily the black hole it’s portrayed as, but his combination of length and athleticism makes him immensely dangerous as a finisher. When he makes it his primary goal to attack the basket like he did against Indiana, you quickly start to see just how high his ceiling as a scorer can be.

Year Two may not have been the dramatic breakout that we all expected from Jayson Tatum, but nor was it the dramatic setback some have perceived it to be. Tatum is still one of the better young prospects in the NBA, and, if he still plays for the Celtics come the fall, should continue to add to his list of postseason highlights for years to come.

Between the off-court drama and the looming specter of his impending free agency, it’s a little too easy to forget that Kyrie Irving was a second-team All-NBA player this season. As a matter of fact, this was unarguably the best of his eight seasons in the NBA to date; in addition to his typically prodigious scoring, he played the best — and most consistent — NBA defense, and distributed the ball better than he ever has before.

All of this improvement was put on display in spectacular fashion in January’s home bout against the Toronto Raptors. While he certainly had flashier scoring performances — in November, he scorched the Raptors for 43 points, including an overtime period where he scored or assisted on every Boston basket — this rematch stands out for how he dominated the proceedings when he wasn’t scoring the basketball.

Simply put, this was a passing clinic from a player who has never been considered much of an offensive facilitator. He was the puppet master behind some of the best ball-movement the Celtics saw all season — his 18 assists were far and away a career-high. Just about every pass you want to see a lead ball-handler make, he made in this game.

The essential two-man game with Horford was working to perfection.

He was making sharp reads to cutters on their way to the rim and finding open three-point shooters when Toronto’s defense was short-handed or out of position.

Much like he did in November’s match up, he took command of a tightly contested game in the final minutes. With a little over four minutes remaining in the game, Kawhi Leonard scored an and-one to stretch the Toronto lead to 104-100. From that point onwards, Irving scored five points and dished five assists to spur a 17-4 that would put the Celtics ahead for good.

And, lest we forget, he hit what was unarguably the biggest shot of the Celtics’ season — and spawned the best call of the year in the process.

Cedric Maxwell with the line of the night after Kyrie hit That Three: “Somebody get me a diaper, I just did something!”

There’s going to be a lot of debate regarding the future of the Celtics in the coming weeks. Some — perhaps understandably — have soured on Irving due to the circus act surrounding his pending free agency and his ugly finish to the season. Others are more determined than ever to pair him with Anthony Davis and take another home run swing at a championship.

Wherever you might land on the spectrum, though, it’s important to remember: Kyrie Irving has been a tremendous player on the court for the Celtics in the past two seasons, and he’s treated us to some extraordinary basketball in the process. This game against Toronto isn’t just the best performance for Irving individually — it’s the best performance for the 2018-19 Celtics as a whole.