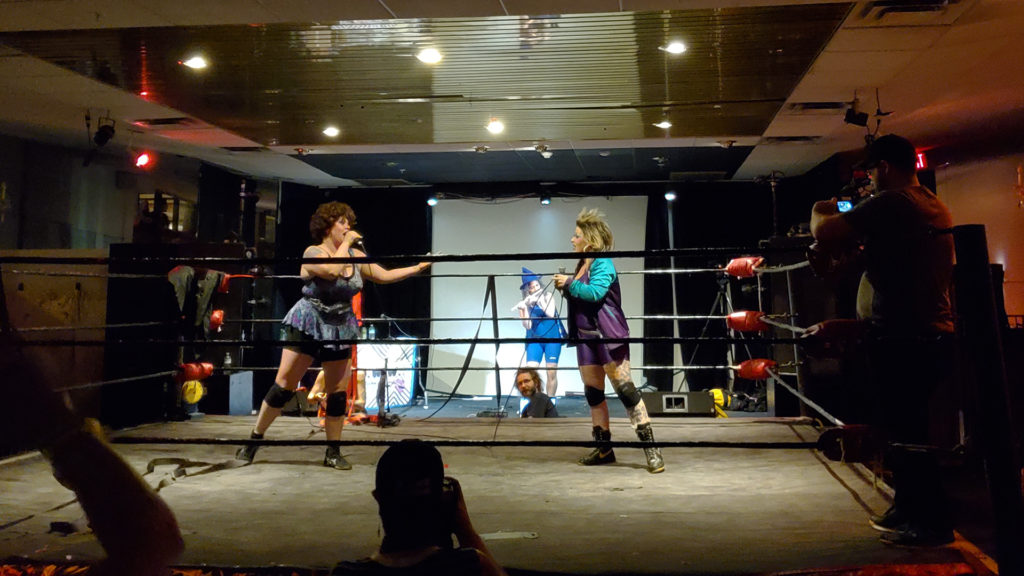 Pammmmmmmmmmmmy and Cherrill, the Bradlee’s Babes, close out the BLOWW show with a duet of My Heart Will Go On, while Shitty Wizard accompanies on flute.

One of the fun things about wrestling is that everyone producing shows has a different idea about what the hell wrestling even is; this is true for the WWE, who waffle between hyping ex-MMA fighters and necromancers, and it’s definitely true for the indie promotions putting on amazingly varied shows like the two ONCE hosted last weekend. First on Friday, feminist DIY promotion Boston League of Wicked Wrestlers (BLOWW) put on their annual Bell of the Brawl to a sold out crowd. Then on Saturday, monster-fighting league Kaiju Big Battel returned, completing a glorious, absurd weekend of wrestling that showed some of the best of what sports entertainment has to offer.

BLOWW has been around a while, but Bell of the Brawl was their first in-ring event and the format was pretty familiar, just with more drag queens. The place was packed and the audience totally bought in, giddily booing and chanting.  It was immediately obvious that BLOWW has a big, devoted fanbase, hungry for a league that reflects them better than the boring, racist trash WWE’s been churning out. To kick things off, Becky, acting as a McMahon-style corporate overlord, came out to announce she’d bought BLOWW, then cut a promo dissing the roster and angrily demanding a drag queen ring announcer. Becky got what she wanted, and said drag queen, JP Delgado Galdamez, ended up kinda being the star of the show, not only announcing every match, but MCing the night and running and performing in the halftime drag show.

Like all wrestling outfits, BLOWW has a large stable of characters, including ‘Mom’ who used an opponent as a mop to chants of “That’s my mom!” and Calypso, who travelled from the future to “put the POC back in Apocalypse.” The show leans hard into these characters and the more theatrical side of the sport, with each wrestler entering the ring to an intro video setting up their backstory. But BLOWW also takes that last W seriously, and one of the highlights of the night was Punky Bruiser and the Rat King’s technical and flashy match for the newly created Trash Belt. The King fought valiantly and hit some pretty stunning moves, including a flying tackle through the ropes that had the crowd explode into screams and chants. It was, across the board, an excellent, rowdy, joyful celebration of sports entertainment, that really successfully uses familiar wrestling formats to decry the injustices of capitalism and the patriarchy. 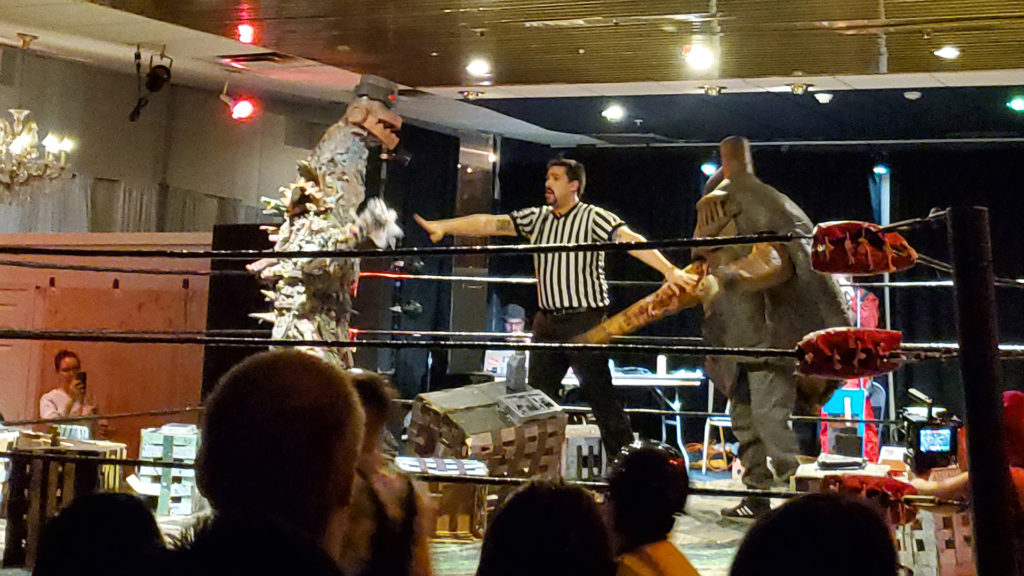 The following day, Kaiju Big Battel returned to ONCE with another round of explosive monster-fighting action. Like BLOWW, Kaiju’s wrestling is less about impressive flips and more about the antics of heroic competitors like Steam Powered Tentacle Boulder, a large tentacled rock with a functioning chimney. The central conflict of the Kaiju universe is the evil Dr. Cube’s quest for world domination using rampaging creations like Tucor, a giant toucan with beaks for hands, and Gomi-Man, an 8 foot tall trash-Godzilla who uses a trash bag full of dirty diapers as a weapon. The diapers were also thrown into the crowd, to really drive home Gomi-Man’s evilness. Beyond the basic Dr. Cube = bad, heroes = good, there’s some deeper storyline stuff going on, like the ascendance of Double Unicorn Dark (Unicorn Party’s evil twin brother), who’s now feuding with Dr. Cube. I’ve been to a few Kaiju shows now and I really couldn’t tell you what’s going on beyond that. Regardless, the body slams look good despite the massive costumes and occasional wardrobe malfunctions, and even after five shows at ONCE, Kaiju continues to be a really fun way to spend a Saturday night. 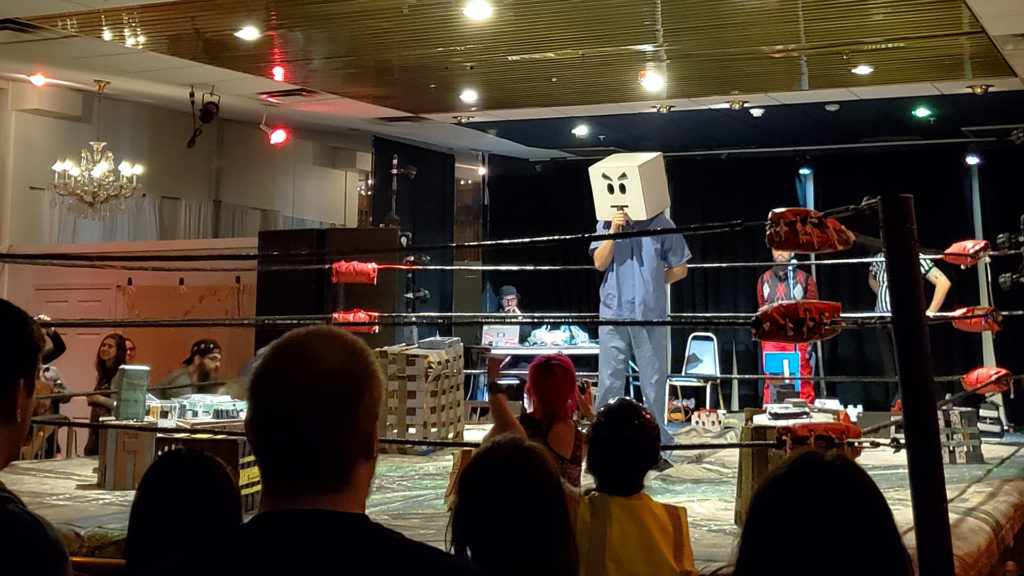 Dr. Cube stands among the cardboard buildings of “Scummerville, Assachusetts” and delivers a promo.

If you read my piece about Beyond Wrestling last month, I spent some time rambling about audience participation and how important it is to the sport. That’s true at a more “serious” show like Beyond, and it’s even more pronounced at theatrical shows like BLOWW and Kaiju; if BLOWWs audience wasn’t so down to go wild during a wizard fight or Kaiju’s audience didn’t sing along to Final Countdown with Referee Dundee at halftime, the absurdity of the show would feel tacky and empty. But it’s 2019 and everyone’s more than happy to spend a couple hours believing that monsters are real and have really been let loose. And I gotta say, if you chant along, and really act like the hits hurt, eventually you lose track and the fight between the bisexual unicorn and the divorce lawyer feels real. And then, when the heroes win, and the cheers explode, it really feels like winning the fight for a better world.

BLOWW and Kaiju Big Battel also both announced upcoming shows that aren’t posted yet; follow them to get tickets before they sell out!