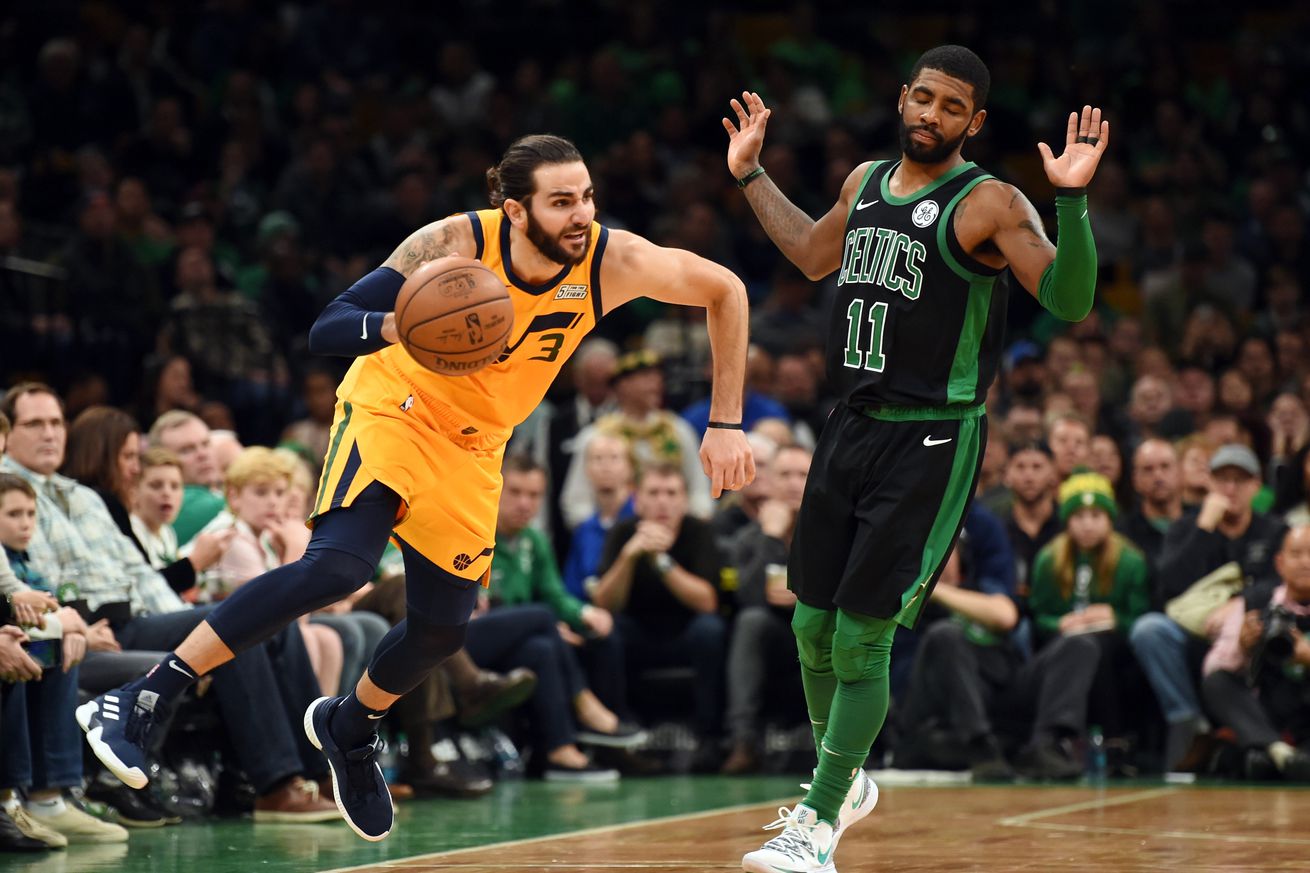 Even the best possible outcomes of this off-season would leave the Boston Celtics in need of a pass-first guard. When I wrote about Patrick Beverley, I made the case that the team’s greatest priority (outside of the obvious re-signings and potential major acquisitions) was a high-energy guard who can share the ball and play some defense. I won’t rehash the same rant again, but in short: effort is contagious, chemistry wins out over talent (within reason), and running plays through your forwards can only get you so far. With or without Kyrie, the Celtics could use a Rubio.

In Minnesota, Ricky Rubio assisted on 36-42% of his teammates’ field goals each year, regularly ranking him in the top 10% of guards (per Cleaning the Glass). These numbers took a nosedive in Utah, dropping down to the 28-32% range. If you think sharing point guard duties with Donovan Mitchell is a factor then you’d be partially correct. It was actually Joe Ingles who led the team in assists last year, giving Utah three prominent players who can distribute. Rubio’s 32% assist rate still led the team, with Ingles behind him at 26% and Mitchell at 21.2%. Rubio, Ingles, and Mitchell tallied 469, 416, and 322 assists apiece respectively. To put that in context, let’s look at Rubio’s last season in Minnesota, where he totaled 682 assists. Karl-Anthony Towns’ 220 assists was second on the team, Andrew Wiggins was third with 189, and Kris Dunn had 188.

What does it all mean? You can paint whatever picture you want really. It doesn’t take much data to prove Minnesota is as mediocre as Utah is competitive, and we don’t stand to gain much from comparing Wiggins to Ingles. Here’s my takeaway: I like the fact that Rubio can switch teams and roles so seamlessly. Utah hasn’t started their seasons gracefully the past two years, but they’ve otherwise been really good in the Western Conference of Death. The Jazz weren’t nearly as dependent on Rubio’s passing as the Timberwolves were, and yet his usage only increased with his new team. Everything I like about Rubio is summed up pretty well by this video:

Pushing in transition, throwing successful alley-oop passes, and spotting up in the corner are all areas the Celtics could stand to improve in; Boston was efficient in transition, but still had trouble creating opportunities and finishing plays, especially given their players’ strengths. His steal percentage has consistently ranked him among the top defensive guards, and while defensive metrics are often misleading, I tend to trust the ones that track individual achievements (like steals) over team achievements (like defensive rating).

Sources told ESPN that Hayward had previously informed the Jazz that he appreciated Rubio’s game and would enjoy playing with the pass-first point guard. Hayward has a strong relationship with point guard George Hill, who helped the Jazz break a four-year playoff drought in his lone season in Utah. However, Jazz management opted not to risk losing Hill in free agency without a suitable replacement after he declined the team’s attempts to sign him to an extension during the season, trading Oklahoma City’s lottery-protected 2018 first-round pick to the Minnesota Timberwolves for Rubio before the July 1 deadline to use salary cap space remaining from last season.

Signing Rubio to maximize Hayward’s – and our other forwards’ – talents makes a lot of sense, but does it make sense in Boston? From the same article:

The Jazz will stress the opportunity for Hayward to be the No. 1 option on a playoff team with a co-star who complements and enhances his skills in Gobert…

With so much changing in the past two years, the Rubio-Hayward connection might not hold the same relevance. But with more and more evidence suggesting Kyrie’s departure by the day, the Celtics might really be in need of some scoring, leading to our second straight summer of asking Hayward to help lead the charge with a young group. To make the most of the hypothetical post-apocalypse Celtics, adding a piece with Hayward’s imminent revenge tour in mind isn’t the worst idea. And forgive me for bludgeoning a dead horse, but if one of the Jays is traded, then that’s all the more reason to get the most out of Hayward.

For what it’s worth, Boston is already on Rubio’s radar:

“There are a thousand possibilities, excluding the teams that have a starting point guard under contract who will remain there. Like Houston or Golden State. Then there’s Boston where you still don’t know if Kyrie Irving will be there. Or Charlotte with Kemba Walker. Things really don’t depend on you but on the other players.

For example, if Kyrie Irving went to Utah, this wouldn’t be a possibility for me anymore. In the end, they choose first.”

If Marcus Smart is a Celtic next year, I don’t see any timeline where Rubio is our starting point guard. But, as I’m sure you’re aware, if Smart is traded and Rozier leaves, the Celtics will be in the market for guards.