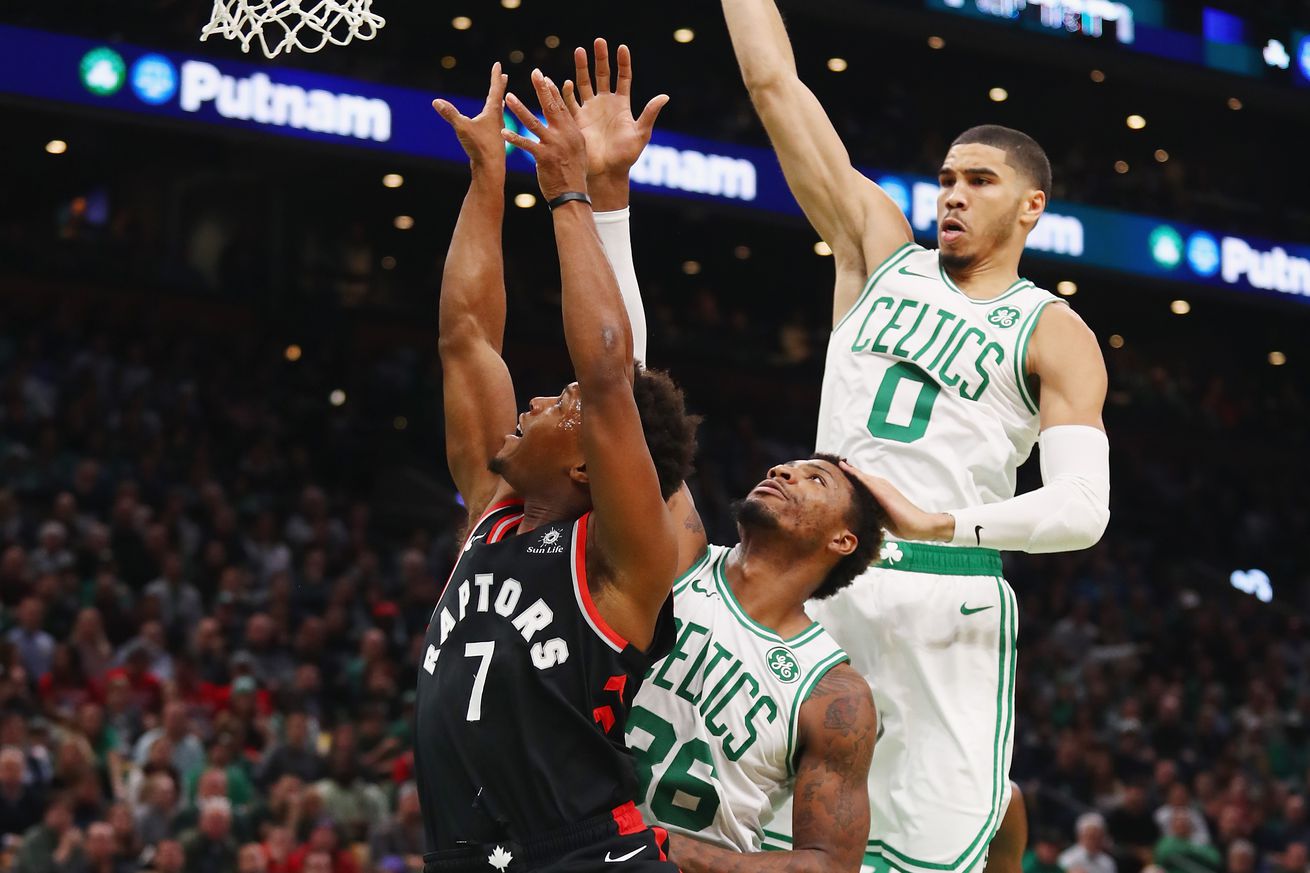 The Celtics were eliminated from the playoffs a month ago, but after ninety-one games this season, I can still see them. Like how an image burns into those old cathode ray tube TV’s when you turn them off, I’m still thinking about Boston even though they lost two rounds ago.

It’s bittersweet watching The Finals. I know the Celtics–these Celtics–could have beat this version of the Warriors. But alas, it didn’t happen and yet, I see ghosts. Squint your eyes just enough and you start to recognize the specters from a forgotten season.

There’s history between Smart and Lowry. Ever since Smart entered the league, the two have tangled whenever the Raptors and Celtics play. Smart has three inches on Lowry, but both play with a chip on their shoulder. They’re bowling wrecking ball point guards that use their stocky frames to create contact in the paint and knock the wind out of unsuspecting rim protectors.

Lowry might be smaller, but he’s got eight NBA seasons on Smart. That’s 516 games of learning how to use his body type to his advantage, be a force on defense without being the longest or most athletic player on the floor, and most importantly, temper his anger. Through five seasons, Smart has become a fan favorite because of his balls-to-the-wall hustle and unparalleled nose for winning plays, but it’s caused him to miss significant time, whether from injury or disciplinary action. Smart has proven to be a quick learner though. He’s become a more than competent point guard in the pick-and-roll. His perimeter shooting has finally caught up with his perimeter defense. Smart may never be a five-time NBA All-Star, but he’s finally a first time 1st Team all-defense player. EGOT next.

Admittedly, this is a stretch. Leonard is on track to being The Finals’ MVP if Toronto can win one of the potential next two games. Brown, on the other hand, is enjoying summer vacation and getting tips from Carmelo Anthony. Right now, the best version of the 22-year-old Brown doesn’t hold a candle to Kawhi, but there’s a through line.

For what it’s worth, there’s some thinking that the Spurs were enamored enough in Brown that he could have been the centerpiece for a trade for Leonard. Brown doesn’t have the wingspan or Klaws of Kawhi, but he still possesses the physical tools to be effective on both sides of the ball. It wasn’t until Year 4 that Leonard really took off in San Antonio. Brown enters the final (guaranteed) year of his rookie contract next season.

Putting in the work ☘️ pic.twitter.com/26FNrUB0Ih

Durant missed nine games before returning last night in Game 5 of The Finals. Obviously, we all know how good KD is, but it was a little bit of a mystery how and where he’d impact this series. Of course now, we’ll never know. Much of Jayson Tatum’s sophomore season had that type of intrigue. After performing in a starring role in last year’s playoffs, would the up-and-comer take more of a starring role this year? Reviews from this year were mixed, but there is no doubt that Tatum has the tools to be at least KD Lite in 2019-2020.

Like Brown is to Kawhi, Tatum becoming Durant is still a ways away, but what should excite Celtics fans is the fact that Boston could potentially have some facsimile of both on the same team. Think about the pairing of Robert Redford and Paul Newman or George Clooney and Brad Pitt. There are few young teams right now that can boast a young duo like this and despite all the drama surrounding this season, Brown and Tatum can still be the cornerstones of the franchise and its rebuild.

Action franchises are always compared to their original and for Gordon Hayward, his final, the measuring stick will be his final, All-Star season in Utah before signing a max contract with the Celtics. There were glimpses this year that reminded fans of Die Hard Hayward–the close quarters playmaking in the mid-range, the combination of shooting and aggressive driving–but far too often, his big games felt like CGI’d teases, stat lines that looked great on paper, but didn’t matter when it really mattered.

Hayward is still only 29-years-old and as Danny Ainge mentioned last week, the team still expects big things from him. However, if he doesn’t regain his marquee status again, he’s still good enough to carry games and series in a supporting role. His skill set as somewhat of a throwback player gives Boston a change-of-pace initiator on offense that most teams don’t have. Think of it as casting Morgan Freeman as president or Robert De Niro as the dad. We’ve seen some high priced vets make huge differences just in these Finals. The Raptors aren’t in this position without Marc Gasol and to some extent, Serge Ibaka. The Warriors’ ace defender all post-season has been Finals’ MVP Andre Iguodala. It’s premature to give Hayward second billing right now, but it’s players like him that can do a bit of everything that pushes teams from contender to champions.