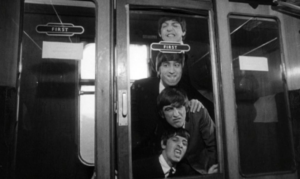 Maybe it was The Beatles. If so, you should catch A Hard Day’s Night.

Hurtling you back into the golden era of rock n’roll and the height of Beatlemania, A Hard Day’s Night chronicles the fictional, comedic, and musical hijinks of young John Lennon, Paul McCartney, Ringo Starr and George Harrison as they travel from their native Liverpool to London for a gig, trailing with them Paul’s grandfather (Henry Brambell).

The band dodges throngs of screaming girls as they throw themselves onto the train bound for London, thinking that they are safe from trouble, but it’s only the beginning of their calamity-filled trip to England’s capital.

Peppered throughout the film, The Beatles’ music is performed to accompany each scene, including “I Wanna Be Your Man,” “I Should Have Known Better,” “Don’t Bother Me,” and “All My Loving,” among many others. The comedic banter and energy between Lennon and McCartney is, to no surprise, electric, and it is bittersweet to watch the two of them, frozen in time, play off each other so well. 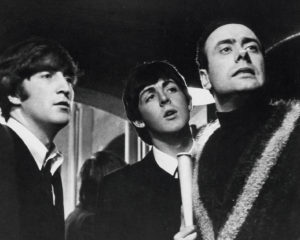 After they arrive in London, more hilarity ensues as they dodge  their manager and try to sneak out of their stuffy hotel to avoid answering fan mail. When the boys sneak out, they get into loads more debacles: getting kicked off property, getting separated, and being mistaken for other famous people.

They finally end up getting backstage, only to have Ringo escape and meander around London (upon being prompted by Paul’s grandfather), for which he is eventually arrested because nobody recognizes him. The boys scramble around to find him, and the ensuing narrative that unravels is one of comedy gold from some of the most beloved musicians in history.

A Hard Day’s Night is considered to be one of the best British films of all time. With its classic soundtrack and its stars being The Beatles, it would be surprising if it wasn’t. Watching the film, despite its notoriety for its smooth comedic timing, is bittersweet. It’s so much more than just a comedy or a musical. 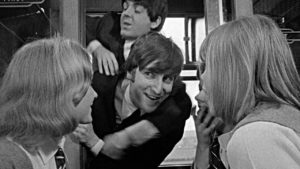 It conjures nostalgia for the better days of music, when The Beatles were alive and well and able to create content (such as films like these, as well as their music) that spreads so much happiness to such a wide range of people. To see the chemistry between the band, how young they are and what is ahead of them, is almost surreal. It makes you miss John Lennon and George Harrison, and wonder what could be if these two lovely artists were still here today.

It’s so good to see The Beatles at this time in their career, with little in their way—no Yoko Onos, no rivalries, no talk of splitting up and no talk of solo careers. This was the time of The Beatles, and the film captures them in the moment of when the band was glad to be together, and excited to be making music.

Don’t miss out on Coolidge’s showing of A Hard Day’s Night, the little sliver of the golden age of rock n’ roll with one of the greatest bands ever, frozen in time, right there before you on the big screen.

Screens Thursday, 6/13, 7:00 @ Coolidge Corner Theatre
Preceded by a performance by students of the Brookline Music School
Part of the ongoing series: Cinema Jukebox