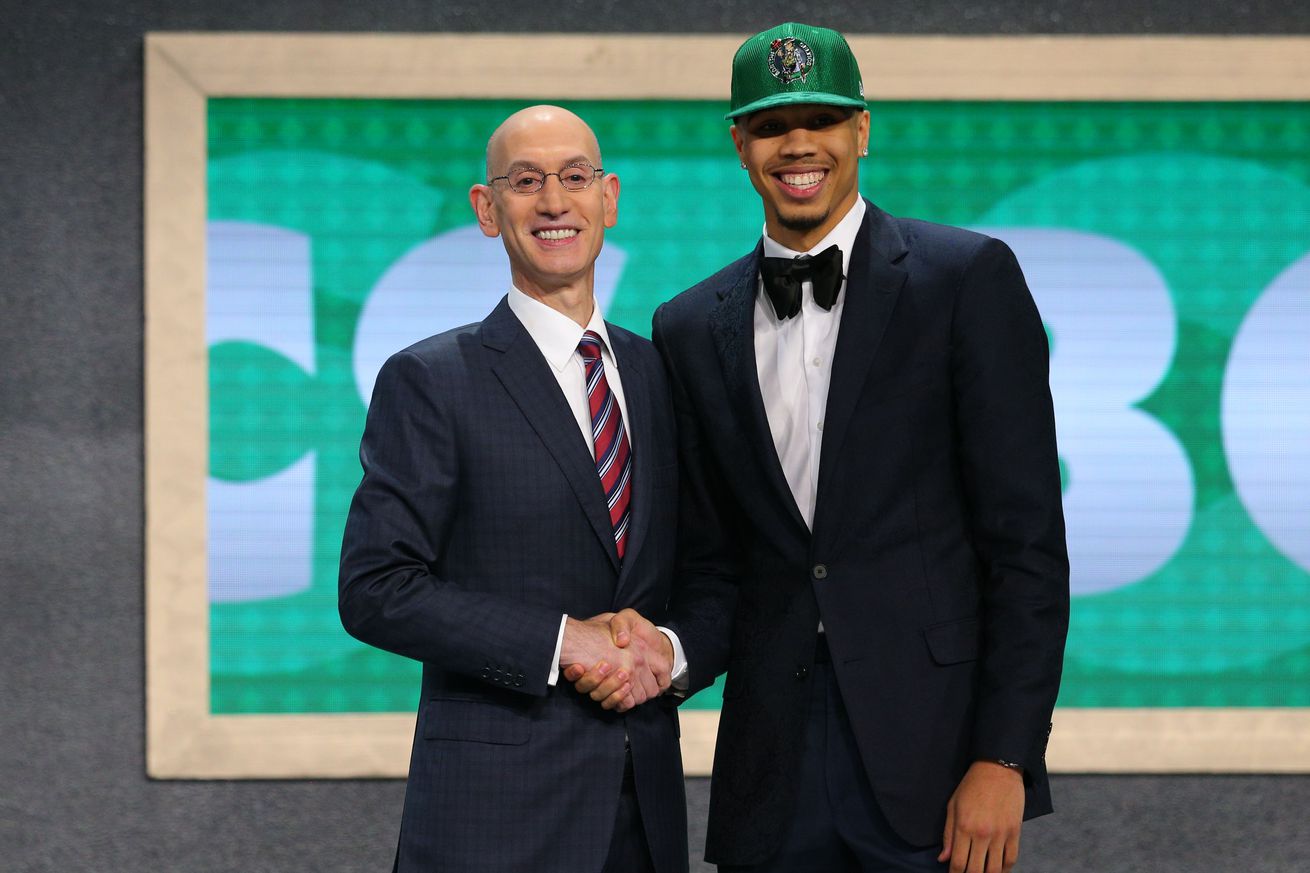 With three picks in next week’s NBA Draft, the Celtics have a lot to think about.

Evaluating the NBA draft is highly personal. It’s not just an exercise in watching players and identifying skills. If anything, that’s the easy part. The evaluation, the hard part, is weighting those skills, deciding what matters, and how it will apply and generate value in the NBA.

In the coming days, my board for the 2019 Draft will be rolling out on CelticsBlog, so I figured I’d outline the philosophies underlying those rankings and offer some overarching thoughts on the 2019 class as a whole.

The most important skill for a basketball player to have is intelligence. It allows for correct decision-making on offense, which is necessary to generate the best looks possible. NBA defense is a synchronized dance in which a player is responsible not just for his own man, but for everything going on around him. Intelligence allows a player to see what’s going on, process it, and make the decisions necessary to remain synchronized.

Some discuss the distinction between IQ and feel, and both are important. I think of IQ as more studied. It is recognizing something you’ve seen and studied before and understanding how to react. Feel is more capitalizing outside of structure. You’re confronted with a set you’ve never seen before, but can intuit what’s going to happen and react accordingly.

Not only do I view this as the most important aspect of basketball, but I also think it’s the hardest to learn. It’s developed through countless hours of playing basketball at high levels. I’m not talking about hours that you get in a season or two of playing NBA basketball, but a lifetime of dedication to the sport. Some players develop feel and IQ, and some succeed in spite of them, but if a player doesn’t have them or show meaningful signs of them, I’m likely to be out on that player.

Numbers and measurements have value, but if they disagree with what I’m seeing on film, I’ll defer to the film. I find this especially relevant when discussing size. If a player is “undersized” but never struggles with that size deficit on film, I’m not going to be concerned about it. Who cares how tall Marcus Smart is if he can stonewall Kristaps Porzingis in the post?

The general idea of physical tools is overrated. Just because someone is tall or has a high maximum vertical jump does not mean that he has useful tools. Instead, what matters is how those tools are applied.

If a player has a very plus wingspan that he uses to impact shots as a help defender around the rim, that wingspan is a valuable tool. However, if a player has an incredible max vert off two feet but cannot generate lift of one (much more applicable to the leaping necessary when driving into contact to finish at the rim), that tool is not particularly valuable.

Tools fit into the larger idea of functional skills and athleticism. Tools measured outside the context of a basketball game aren’t all that meaningful. Take the max vert example again. A player with a low overall max vert is not necessarily a bad athlete. If he elevates to that max vert with little effort and load time, he might actually be a very good functional athlete, because the overall limitations don’t matter in the context of a basketball game.

There’s also the issue of what tools matter. Too often, people are caught up in things like max vert when discussing athleticism, but ignore lateral agility and strength, which are even more important to basketball.

I don’t like the concept of “upside” the way it’s popularly applied to athletic/raw/bad players. I think of players as showing the foundations of skills that have the upside to be developed and generate value, whereas the all-encompassing label of “upside” is not something that’s particularly descriptive.

Sources of upside also need to reconsidered. Conventional sources for the term, like age or vertical pop or length, might not be the best way to conceive of the concept. Instead, skills like strength and intelligence and flaws like unrefined bodies still encumbered by baby fat should be considered sources of upside as well.

Certain roles are more valuable than others. It’s more important for a team to have an offensive initiator than a sharpshooting off guard, because the impact contributed to an offense by an initiator on every single possession is just so overwhelming, even if the off guard is really good at what he does.

With that in mind, players in crucial roles like offensive initiator or defensive anchor have less margin for error. If they’re fundamentally flawed, they cap your team, and if you’re pursuing high-level contention, you cannot cripple yourself like that.

We should consider the value of all roles, too. Notably, I have suspicions that the traditional 3&D role is overvalued. A player who defends his position and hits spot-up 3’s is not adding much. It’s the ancillary skills on top of that baseline that make such a player worthwhile.

It’s also necessary to consider the NBA role a player will fill. If a prospect is a solid post-up big in college, but lacks advanced post moves and is a slow decision-maker who takes too long to capitalize on the defensive attention he draws, he’s probably not going to be a major post-up option in the NBA. He might have good skills in those areas, but if he’s not good enough, he won’t utilize those skills in the NBA. So, how do his skills translate to another roll? Does he have the vertical pop, hands, finishing ability, and on-the-move passing to be use as a roll man? Not everyone has to fit neatly into a defined NBA role—sometimes players are great enough to transcend those and create a new paradigm—but it’s a useful way to anticipate value.

It’s harder to come by some positions than others. If a player is overwhelmingly likely to be a backup point guard (and not one of the rare high playoff value added ones), I’m unlikely to consider him in the first round. There are simply too many good backup point guards in the world available for cheap to spend serious draft assets on one.

The same is true for plodding big men. Even if you’re a good plodder, one who could very realistically be a regular season starter, you’re so replaceable for as little as the minimum salary, it’s just not worth spending a pick and incurring risk chasing an outcome like that.

The flip side is the discussion from the above section—it’s worth taking shots on scarce positions. This comes into play with wings with plus ancillary skills, bigs with plus movement skills, and other rare archetypes.

A first-round pick entitles a team to four scale years and as many as five years on a second contract (more realistically three to four). In the draft, you’re securing those years for your team, for better or worse. If a player is far away from being good, you’re going to pay money and roster spots for those bad years. A player may have a genuinely intriguing long-term outlook, but if the drafting team is going to be unlikely to derive value from that eventual outcome due to their own timeline, it probably shouldn’t spend significant draft assets on him.

By ranking a player in a given position, I am not expressing confidence in a single outcome. Instead, I’ve considered what I believe to be all realistic outcomes, thought up a probability of that outcome manifesting, weighted the outcomes, and come up with an expected value.

It’s much more valuable to understand and foresee how and why a player could succeed or fail. You’re not always going to be right as to which is realized in a given situation, but if you can anticipate the way in which a player will develop, you have a strong process, and strong processes win out over time.

I still haven’t decided if this draft is good or bad. What I can say is that it’s very low on star talent and very high on rotation talent. I expect the 2019 Draft to produce a lot of good players between picks 2 and roughly 45, some of whom will likely hit at least fringe star outcomes, but the odds of more than one true superstar emerging from this class seem low.

I have four tiers for the first round of this draft, ranging from 1, 2-9, 10-21, and 21-30 (though Tier 4 would extend to the early 40s if I were to rank that far). Tier 1 is self-explanatory. Tier 2 is very bad for that typical range, and I would not take any of the players in it in a typical draft’s top five picks. However, I expect some of those players to be available in the middle of the first, where they’ll be steals. I’m a big fan of Tier 3, which is filled with players I’d happily take in the teens of a normal draft. Tier 4 falls off a bit, but is so flat extending well into the second round that I don’t mind the potential rotation players it offers.

Overall, trading up in a draft this flat would be a huge mistake. There are a couple Tier 2 players (Jaxson Hayes and Brandon Clarke, for example) I could potentially be talked into moving up from Pick #14 to secure (would cost one of pick 20 or 22 to get up to the 8-10 range), but I’m much more comfortable just selecting where the Celtics currently sit.

Trading out is the option that really appeals to me, either for established players or future picks. If for future picks, the 2020 Draft is appealing in that it’s flush with lead guard prospects, should the Celtics need one of those soon. The 2021 Draft is highlighted by a few potential superstar prospects at the top, and the 2022 Draft should include high school players and be overloaded with talent.

With the 14th pick, I’d target whichever of my Tier 2 big men is on the board. Clarke is a name that’s been fairly consistently linked to the Celtics and would be an excellent fit. I see this pick as less of an “upside” swing and more a chance to secure a high-probability front court contributor.

At picks 20 and 22, I’d want to snag a player with initiator upside, and there should be a few intriguing options. If none of those are available, I’d opt for a high-probability rotation wing with one of the two picks, and several of those will surely be available. With the other pick, I’d take a swing on one of the riskier players with potential high-level outcomes. Some candidates could be one of the bigs with injury concerns, like Bol Bol or Jontay Porter, who would both complement the other two selections well.

Thanks for reading and be on the lookout for my big board rolling out on the site in the next few days. If you want to stay up on who the Celtics have had contact with, I’d recommend checking out this workout tracker I’ve been running. If you’re trying to cram draft coverage over the next week, I’d suggest checking out the work by all the wonderful people over at The Stepien and Red Team Scouting, smart friends Jackson Frank, Ben Pfeifer, Trevor Magnotti, and many more. Get excited. We’re in for a wild week.