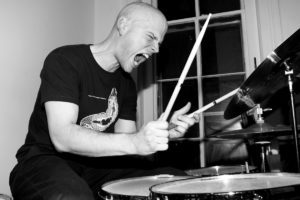 Chris Corsano is all over the map, both literally and figuratively. While currently residing in upstate New York, he was previously based in the UK, after re-locating from Western Mass. Over the course of his musical career, he has performed and recorded both solo and with numerous collaborators including Joe McPhee, Jim O’Rourke, Thurston Moore, Merzbow, Bill Orcutt, Michael Flower, C. Spencer Yeh, Six Organs of Admittance, Sir Richard Bishop of Sun City Girls (alongside Ben Chasny of Six Organs of Admittance in Rangda), Jandek, and most famously Björk. Though he occasionally dips his toes into more conventionally-structured drumming (as in Rangda, or during his brief stint performing with Björk), the majority of Corsano’s work is improvised and abstract, making great use of extended techniques that explore sonic textures and subtle tonalities not typically associated with the drumkit. While there is a precedent for improvised drumming in the world of free jazz, Corsano helped to pave the way for a whole new generation of free improvisers who are rooted in hardcore and punk rock, and equally at home in the world of free jazz as they are in the worlds of noise and avant-rock.

Corsano was able to find some time to set aside from his restless schedule performing, recording, mixing, and releasing music on his own label Hot Cars Warp Records to speak to us ahead of his upcoming performance with longtime collaborator, New England-based saxophonist Paul Flaherty, and Danish saxophonist Mette Rasmussen (along with Boston-based supporting act tK, featuring local legend Thalia Zedek) at The Lilypad on June 20th.

Boston Hassle: I know you probably get this question the most and are probably sick of talking about it, but just to get it out of the way, can you talk about working with Björk? I read up on the process already (Corsano sent recordings of his playing to Björk, who used snippets of the recordings, not unlike sampling drums in hip-hop) so I specifically want to know what it was like for you learning the re-worked parts that Björk constructed for the album to play live. What was your process for learning that and do you think it influenced your subsequent work?

Chris Corsano: I’m not sure exactly how many different songs we played over the course of the tour, but they were from all her records, not just Volta (the one I’m on). So I basically listened to the recorded version of each song we were doing and figured out what my part should be and run that by Björk to see if she thought it’d work with the song. I was usually not the main beat-supplying entity on stage–Mark Bell and Damian Taylor supplied the foundation, so I was free to add contrasting percussion parts on top of that. I had a lot of hand written notes on song structures, what to do, and when to do it. It was sometimes a bit of a struggle to come up with a part that was nuanced enough to fit in between all the other things going on (Mark, Damian, a ten-piece brass band, a keyboardist, and of course Björk herself), but also strong enough to have some impact when you’re playing at a festival with 50,000 people.

BH: Tell me about the term “The Hated Music”. Is it solely tongue-in-cheek or is there more to it?

CC: Before we came up with a name for our first record, Paul Flaherty and I were talking to Byron Coley, who was putting the record out on his label with Thurston Moore, Ecstatic Yod. I think Paul was remarking that freely improvised music was either ignored by the commercial music industry, or disparaged by some of the self-ordained gatekeepers of the jazz world. When selling 1000 copies of a record is basically like going Gold for improvisers, it’s fair to say that it’s not a well-loved music.  So, at one point Paul said to Byron something like, “It really is the hated music.” And Byron replied that there’s our title for the record. The title is a little tongue-in-cheek, but I don’t think it’s off base. Of course, not everybody hates it. We don’t hate it, obviously, otherwise we wouldn’t be doing it.

BH: Regarding what you said about playing music that isn’t necessarily for everybody, I wanted to ask about making a career doing that. I imagine there are many financial difficulties involved with it. How do you and/or your peers find a way to balance committing to such an esoteric form while keeping a roof over your head and such?

CC: I’ve been lucky enough to be doing music for a living without a day job for about 13 years. For me, it turned out that the things I liked doing (touring, playing with a lot of different people, releasing records), happened to add up to paying my bills each month. Some years have been leaner than others, and there have been times where I thought maybe having a “real” job would be easier/more sane. But I always want to be playing more, not less, and having a job would get in the way of that.

BH: You’ve collaborated with Paul Flaherty a lot in the past, but I see you’re playing with him and others as a quintet here in Boston in July. Have you played with the others before?

CC: I’ve never played with Damon Smith. Forbes Graham, Paul and I did a trio once. And Jeb Bishop and I played together in Mars Williams‘ Ayler-XMas show. But I think we all have an idea of what the others do, and I’m looking forward to having my pre-conceived  notions immediately dashed upon the rocks once things get rolling and seeing where we all end up.

BH: Do you prefer or have a different approach for going into a show with familiar collaborators vs. once you’ve never played with?

CC: Not really. Whoever it is, I listen to what they’re doing and try to respond in a way that builds the momentum.

BH: You play both “out” and “in” but do you think about the two approaches differently or do you go in with a similar mindset either way?

CC: I’d say the general approach is the same. You’re just trying to be aware of, and able to respond to, all the things going on around you. Taking some kind of basic stimulus-response system and turning it into something greater than itself, hopefully.

BH: Forgive me if this is inaccurate, but it seems like when you play solo, you’re responding to what the instrument is doing as you play it, which creates something like a feedback loop between you and your instrument, but at the same time is constantly evolving as what you play creates what you hear which informs what you play, etc. Is that at all accurate and if so can you talk about that? Is this something that still exists when you perform with others?

CC: Yeah, it’s that stimulus-response thing again. And every moment is a new stimulus, created by what came before it. So, yeah, I am responding to what the drums are doing. And not doing. Solo sets sometimes have a large amount of me doing something that makes me feel like “ah, I want such-and-such sound right now,” but when I go for that sound, I might not get it. Sometimes because I’m playing a borrowed drumkit that I’m not used to, sometimes because things you do in one room with a certain acoustic sound totally different in another room, and sometimes it just happens that you don’t get the sound you were hoping for in that exact moment. So then you’ve got to quickly adjust and turn it into something else. And that applies either to solo or group playing.

BH: Tell me about your involvement with Sunburned Hand of the Man.

CC: I was living out in western Mass. and so I’d been on some bills with Sunburned, usually playing with Paul. I liked the tightrope that they walked — building up songs from thin air that could just as easily dissolve back into the ether as they could bottle-rocket over the rainbow. I did a few shows with them and then we did a west coast tour in the summer of 2003. I think I’ve done about 40 or 50 shows with them since. Last one was something like 3 years ago, so I hope our paths cross again soon.

BH: How did you connect with Jandek and what was it like playing with him? I understand that the music with him was mostly improvised, but did the presence of vocals affect your playing with him?

CC: Barry Esson was setting up the first Jandek shows in the U.S. We were going to play New Orleans, but this was in 2005 when Katrina hit. I did two shows in NYC with him. And then some others in the UK a few years later. I love playing with Jandek—improvising songs can be tricky–sometimes you get pulled in all sorts of directions trying to play to what the instruments are doing and also what the lyrics are saying while keeping a thread running through it all. So it’s great when it feels like everything’s working and building up to something that you don’t even know what it will be.

BH: Is there a theoretical framework or thematic intent behind your improvised work? Are you intending to express something beyond just creating sound?

CC: Yeah, definitely. I don’t want to put too fine a point on it, though, because people in the audience make their own meanings of a what I do based on what they’re bringing to it. For me, though, I’m interested in the “free” part of free-improvisation and what that could mean in and out of music. I say “could” because I don’t think it does mean one specific thing–ask 10 people, you’ll get 11 answers on what it means to play “free.” But for me, for right now, the ‘free’ part isn’t so much about me doing whatever I want, but me playing in a way that frees up others to play more completely themselves. And hopefully the people I play with do the same for me. For all the years I’ve played with Paul Flaherty (it’s been 20 years since our first show!), I’d say he’s one of the great liberating forces in free music.

BH: Regarding the theoretical approach to playing “free,” do you think that carries any extra weight in today’s socio-political climate? Do you ever find outside things like politics and cultural climates to inform your playing?

CC: Yeah, in this current climate, ideals of generosity and collectivism could use some championing. It’s not like I’m spelling it out and stating that verbally at shows, but hopefully it comes across somehow. Like everybody else who plays music, I hope I’m expressing aspects of what I am/what I believe when I’m playing (and not just going through motions to make sound without meaning). But at the same time, music is an abstract thing, and I don’t think being didactic about it from the stage is what I’m after, either.

BH: What do you enjoy doing when you’re not playing music?

CC: Like a lot of other musicians I know, a whole lot of my world revolves around music even when I’m not playing it – Listening to music. Hunting for records. Going to junk/thrift/reuse stores (to shop for things to make music with). Lately I’ve been doing a lot of mixing, which I don’t know if I enjoy. I think “hate” might be a word closer to the truth. Ha. But it’s fascinating. And frustrating. And humbling. All at the same time. One non-music-related thing would be swimming. There’s a big lake in the town where I live, and so when the weather gets a bit hotter, that’s something I’ll be doing.

The post A Conversation with Chris Corsano appeared first on BOSTON HASSLE.