Between my crazy work schedule and having two young kids at home my brewery visits have become few and far between. My list of new breweries I want to check out and favorites I need to get back to has gotten really long. One that has been high on my list for a while was Amory’s Tomb, which opened in late 2018 in downtown Maynard. I knew the brewery was close by and it was poor form that it had taken me so long to stop by, and I felt especially bad about it when I plugged it into my GPS and it was only a 6-minute drive from my house. Better late than never though, and I used my Father’s Day privilege this weekend to sneak out on Saturday afternoon in order to check out the taproom and sample a few of their beers. 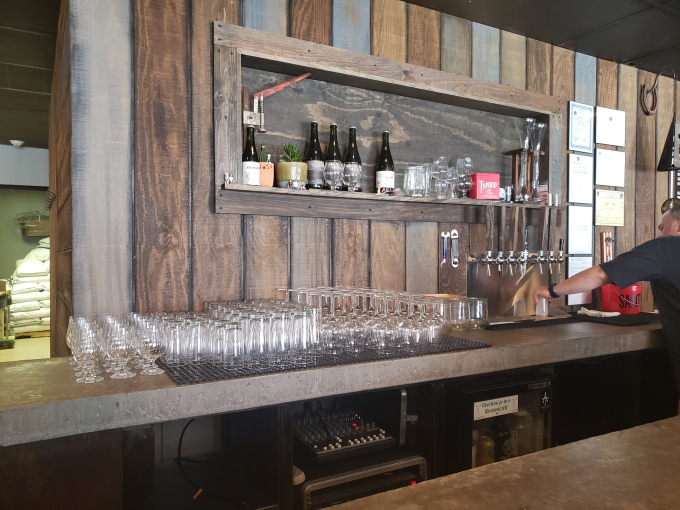 Amory’s Tomb is located on Main Street in downtown Maynard. Finding parking on a Saturday afternoon was no problem. The taproom is cozy and welcoming, a big bar dominates the room, while communal tables offer additional seating for groups. It is obvious you are in a brewery, there is a palate of grain sacks in a closet down one hallway and fermenters easily visible from your seat at the bar. On Saturday there was a solid stream of people stopping in for a beer, it was obvious that many were locals and regulars, Allen (one of the co-owners) was running the bar and knew many of the patrons by name. The taproom is currently open Wednesday-Sunday, they sell growlers on Wednesday and Sunday and focus on pours Thursday-Saturday. They don’t have food but there are a number of restaurants in the area where you can grab a bite.

Amory’s Tomb specializes in Belgian styles, especially saisons. Allen was clear that they don’t make sweet beers, even the hoppy styles are dry in the finish. No milkshake IPAs or pastry stouts on the menu. All of the beers are available in full and half pours, with a selection of glassware that fits the different beer styles. They also have a small barrel program that is focused on wild ales, and the products of this program are typically available in bottles to go. The announcement of a bottle release on Friday night was the last piece of information that convinced me to finally make a run over to Amory’s Tomb, later this week I will write up a full review of one of the beers I grabbed. 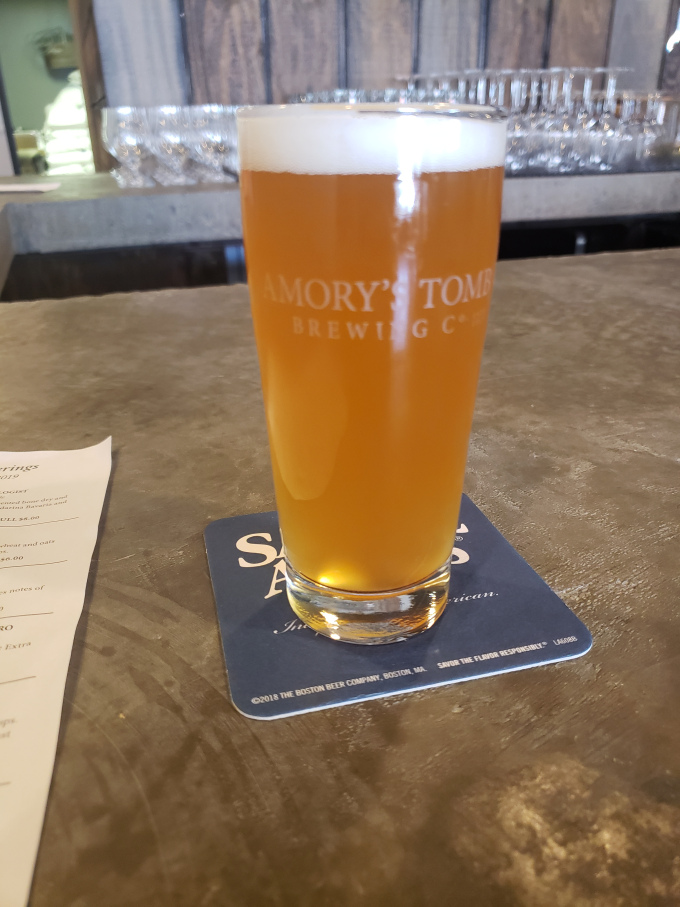 While I was visiting the taproom I tried three of the beers on draft (hooray for half pours) and I really enjoyed all three. Satellite Archaeologist is an American Farmhouse Ale dry hopped with Mandarina Bavaria and Hallertau Blanc hops. The fruity and floral hops meld perfectly with the expressive yeast strain, this beer was delicious. Static Palace is a farmhouse pale ale brewed with a kviek yeast strain. It is light and refreshing, mixing the citrusy and grassy hops with fruity esters from the fermentation. Estuarial is a more traditional saison brewed exclusively with local grains along with noble hops. It is spicy and herbal, easy drinking, and finishes bone dry.

I will be really interested to see if Amory’s Tomb sticks to this Belgian focused model moving forward. Most brewers and a subsection of beer geeks love creative and well-crafted saisons, but the money in craft beer seems to be concentrated in hazy IPAs and pastry stouts right now. Too many breweries have started with Belgians before moving onto the haze. There have been some encouraging signs that this is changing, and expanding palates could lead to more demand for these styles. I really hope this is the case, I love saisons and if you do too the beers at Amory’s Tomb are absolutely worth the trip!