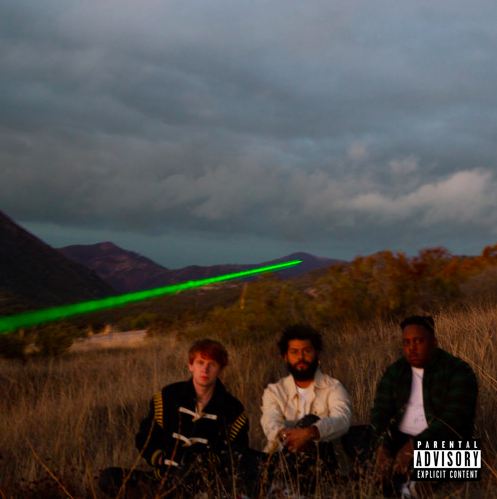 Injury Reserve is the consistently underrated and relentlessly creative hip hop trio from Phoenix, Arizona. With their debut mixtape Live from the Dentist’s Office and their fantastic follow-up Floss, Stepa Groggs and Ritchie with a T, along with producer Parker Corey, developed a dedicated cult following and established themselves as a unique and essential force in underground hip hop. On their self-titled debut album, the group has made an effort to experiment more than ever. As a result sound they more cutting edge and more determined to make their mark in their genre.

At times Injury Reserve can sound downright futuristic. The single “Jailbreak the Tesla” incorporates samples of car-sounds and rolling bass coupled with biting pitch-shifted vocals from Ritchie and Groggs and a stand-out feature from Amine. Ritchie and Amine’s verses —literally jailbreaking a Tesla like it’s an iPod touch— are clever and at times hilarious. “Elon on them shrooms/and Grimes’ voice gonna be the GPS,” Amine raps snarkily.

Other features on the album go over just as well as Amine. Cakes da Killa is sassy and badass as usual on “GTFU” with JPEGMAFIA, Rico Nasty comes through with an unexpected introspective verse on the perplexing cut “Jawbreaker,” and Freddie Gibbs manages to sound as cool as ever on “Wax On” despite being clearly out of his element over Corey’s eclectic production. Gibbs usually sounds more at home on conventional trap instrumentals or MadLib’s sample-based beats, but “Wax On” shows that he can fit himself anywhere. The most surprising feature is DRAM’s beautiful and soulful vocals which are accompanied by gorgeous strings on the slow-jam “New Hawaii.”

The instrumentals on Injury Reserve are the most varied and the most original we have seen from Parker Corey yet. From the skeletal “Jawbreaker” to the maximalist “What a Year It’s Been,” Corey really shows off his range. One of the most surprising cuts “Gravy and Biscuits” samples what sounds almost like ragtime piano, and features one of the albums catchiest hooks.

While Injury Reserve clearly showcases some of the trio’s best work yet, it also brings some shortcomings to the surface. Ritchie and Groggs rap repeately about the group’s come-up on tracks like “Koruna and Lime,” “Gravy and Biscuits” and “Wax On” which can grow a little tiresome. However, there are times on the album where this subject works through and through. For example, the noisy and determined “What a Year It’s Been,” the introspective and personal “Best Spot in the House” and the celebratory closer “Three Man Weave” are all highlights. But unfortunately, the album is just a bit oversaturated with the topic. Injury Reserve fans already know how underrated the group is, they don’t need to be told again and again.

Injury Reserve is obviously determined to make their mark on hip hop and their self-titled debut is a fantastic start. It might not have as many visceral moments as Floss, but it shows the group really coming into their own. They have—for the most part—dropped the very obvious Kanye influence and are carving out their niche. The Phoenix trio is now more than ever an underrated hip hop act to keep an eye on.