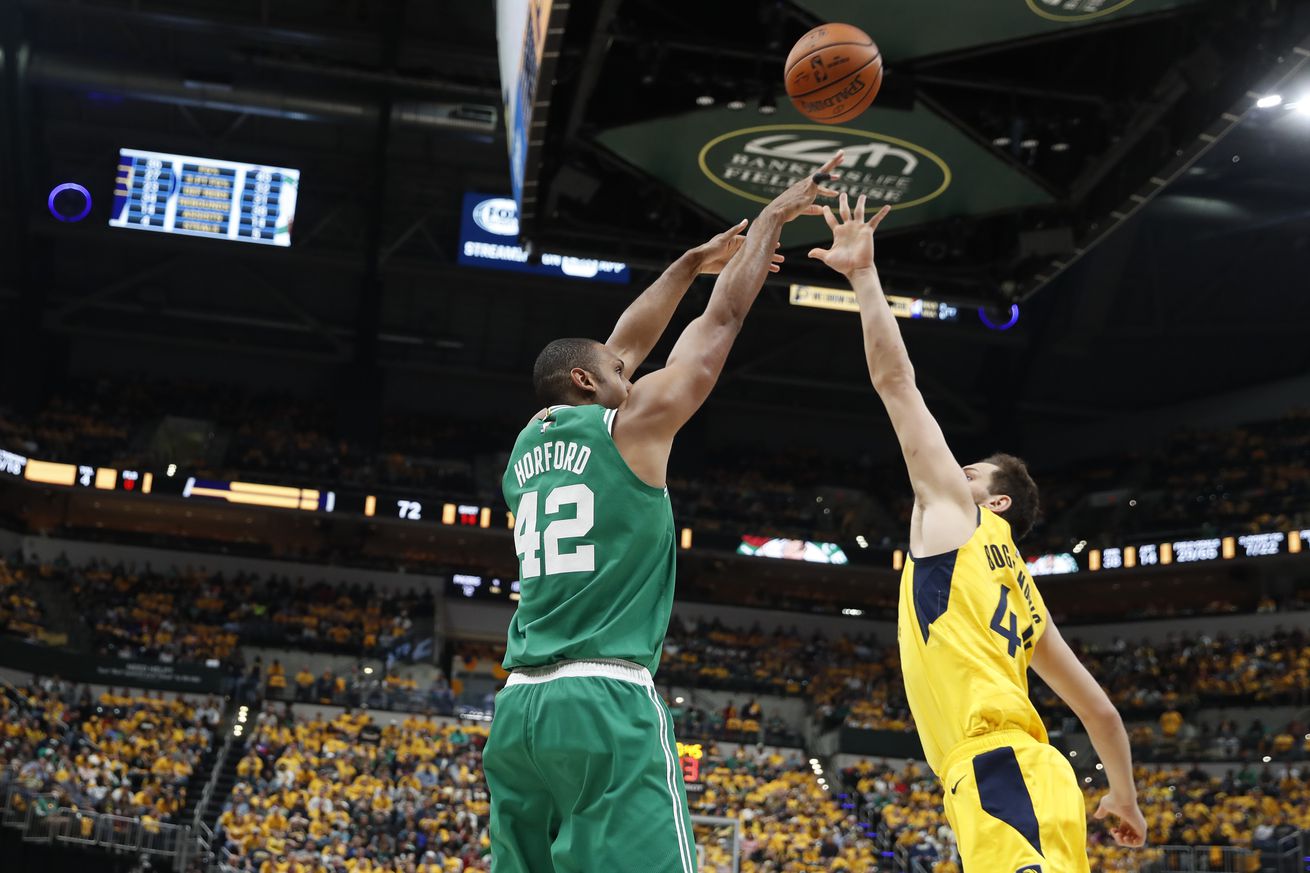 Should Al Horford be in the Celtics’ plans?

Adrian Wojnarowski has reported that Al Horford has opted out of his $30.1M player option today. The long-expected move gives Horford flexibility to see what the Celtics will do entering free agency and earn more guaranteed money long-term if he stays.

Multiple reports indicate that Horford will do what he can to remain in Boston. Danny Ainge said Horford’s long-term standing with the team is a priority this summer. Boston currently has no player on the roster that can replicate his production at the big-man position or find comparable talent to assist the continued development of the youth. Horford also keeps the team competitive for the near future.

The Celtics, in conjunction with their likely younger turn ahead, also need to work on developing the culture they lost during the 2017-18 season. He’s been a calming presence since his arrival, a force in three post-seasons and among the NBA’s best defenders. Few bigs mix his passing, defensive, rebounding and shooting ability.

However, paying players for past performance may not be sound cap management. Horford has shown little indication he’s slowing down, but there’s financial risk for Boston in re-signing the 33-year-old.

In the immediate, the Celtics give themselves cap relief by not absorbing a $30-million hit. Restructuring Horford’s contract allows Boston to use its full $9.2 million mid-level exception and a $3.6 million bi-annual exception this summer. In tandem with Horford and the remaining cast, the Celtics can add talent to remain competitive in the East.

A new deal for Horford with Boston also isn’t actually a restructure. All kinds of restrictions dictate true re-negotiations. His opt-out on Tuesday completely terminated his prior contract, so the Celtics can sign him for anything up to his $40.6 million max salary.

Since the Celtics are re-signing Horford with Bird Rights, the contract figure could increase or decrease by 8% based off the first year’s salary. For cap relief purposes each season, it’s more likely to decrease considering it’s an increase in total guaranteed money for Horford.

All these contract provisions make their reunion a perfect deal for both sides. Horford stays for more money. The Celtics retain their leader, an irreplaceable talent at his position and gain some cap relief.

Another viable alternative is clearing house. Letting Horford, Kyrie Irving, Terry Rozier, Marcus Morris and the rest of the free agents walk opens $27 million in cap for Boston. They could use that money to invest in a younger front court player like Julius Randle or put together an offer sheet for Bobby Portis.

Horford is on the back nine and would turn 35 entering the final season of a three-year deal. He missed 14 games last year to manage a nagging knee ailment. By the time playoff time arrived, he regained top form, averaging 12.8 points, 10.4 rebounds and 4.2 assist in the first five playoff games before the entire team collapsed. His shooting percentage dipped to 41.8% for the entire postseason.

Over his three-year Boston tenure, he’s managed to save his best for the postseason and manage his energy through the course of the regular season. He doesn’t take a massive number of load management nights, but Aron Baynes’ return, Robert Williams’ continued development and another big on an exception could provide him more. But for a team that could potentially be entering another rebuild, is keeping Horford on really worth it?

He’s voiced his desire to play for a contender in the twilight of his career and with Boston’s uncertain future, it’ll ultimately be Horford’s decision on whether or not he sees Banner 18 as part of his.

“Let’s see what happens with the team and all that,” Horford told EuroHoops during a trip to Madrid at the beginning of the month. “Looking to improve as a group.”