On Monday I posted a write-up on my recent visit to Amory’s Tomb, the Maynard establishment that specializes in saisons and other Belgian styles. The day before my visit Amory’s Tomb released three beers in bottles, all part of their barrel program. The importance of the barrels is obvious at Amory’s Tomb, a stack of full barrels is one of the first things you see as you walk into the taproom. After enjoying everything I tried on draft I was happy to grab a bottle of each release. One of the beers I bought was Umbrella Pose, a mixed fermentation farmhouse ale. They also released a version of the beer with blood oranges called Nineteen Animals. Amory’s Tomb Umbrella pose is available on a rotating basis in 375 mL bottles. 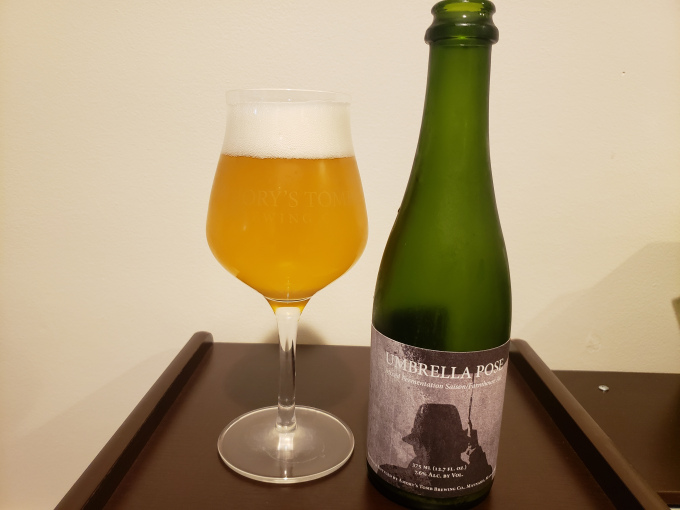 Amory’s Tomb Umbrella Pose pours hazy gold with a massive white head. The aroma is mostly imparted by the fermentation, spicy, funky and acidic. The fermentation profile also leads the flavor, notes of green apple, peppercorn, and sour cherry, along with just a little tartness in the finish. These flavors are complemented by some earthy and lemony hops plus hints of biscuits and whole grain bread from the malts. Umbrella Pose is light and refreshing but packs some punch at 7.6% ABV. The finish is dry with some lingering flavors from the yeast and subtle sourness. I am a sucker for a well crafted wild ale and this hits all the notes, a great balance between complexity and drinkability. I can’t wait to try the other beers I grabbed! Hoppy Boston score: 4.5/5.