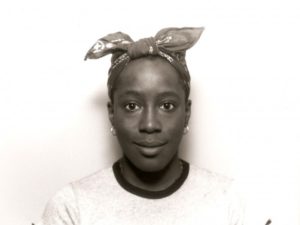 A filmmaker finds herself attempting to pull the story of a woman known for playing mammy roles in films of the ’40s out of obscurity, and then following in some of the actress’s footsteps.

To put it cleanly: this movie is black, it’s sapphic, it’s definitely from the 1990s, and it is hilarious.

The film follows Cheryl Dunye, writer, director, and lead, in her dedicated researching of the actress Fae “The Watermelon Woman” Richards, along with her friend and sidekick, Tamara. They live, work, and film in Philadelphia in the mid 1990s, and their banter is enough reason to see the movie, but along with it comes arguments and queries about the place of black lesbians in the film industry. 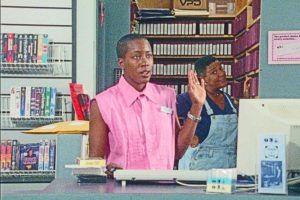 Cheryl and Tamara work at a movie rental store. For those of us unfamiliar, these were stores that were filled with analog video home system (or VHS) tapes. Patrons came to these stores to seek out specific films or to peruse the shelves and find something interesting. Movie fanatics and budding filmmakers often comprised the staff of these stores, and would act as guides for patrons who needed advice on what was good, while also giving them the access to watch films in the name of inspection. [Editor’s note: There remain a handful of active, functioning video stores in existence, including The Video Underground, which will be screening this film tonight!]

When not planning gigs for their videography busines, or scoping out women to guess who is and is not “in the family” (meaning gay), Tamara and Cheryl take advantage of their job by renting movies under customer accounts for their personal viewing, and for Tamara’s personal pleasure. When Tamara puts in a request for a lesbian pornographic film under the account of a customer, Diana, and the order is unable to be filled, the situation gets Cheryl and Diana in conversation and sparks a connection.

Diana, a confident, wayward, and fairly forward white woman, invites Cheryl over her house to view the movies she has rented. Wine leads to dinner, which leads to smokes, and then kissing and so on. Cheryl and Diana enter into a relationship that both are very invested in, but Cheryl gets push back from Tamara, who is untrusting of Diana and just plain doesn’t like her. Cheryl has doubts of her own, too, but is confident in Diana enough to let the affair run its course. And run the course it does, just as the relationship between Fae “The Watermelon Woman” Richards and her white lover and director, Martha Page, did in their time. 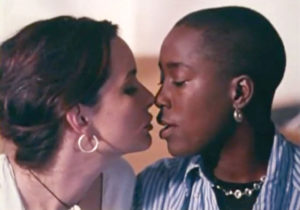 These two relationships, decades apart, mirror each other, and Cheryl realizes she runs the risk of becoming lost to history (as Faye nearly did) when she gets more entangled with Diana.

No one wrote out, and therefore nearly no one remembers, Fae’s work or life. She is nothing more than a Mammy in a few of Page’s pictures, and most do not recognize her name, or deny her and Page’s relationship being anything more than professional.

“The Watermelon Woman. Who the hell is she?!” Tamara says at the beginning of the film, exasperated at Cheryl’s project. Fae’s personhood is forgotten as her story has been truncated, and through Cheryl’s project she realizes that she herself seems to face a similar fate.

“You know? I thought it was going to be easy,”  Cheryl concludes when directly addressing Fae’s lover through the camera at the end of the movie. She explains what knowing Fae’s story means to her as a 25-year-old black lesbian filmmaker, saying “It means hope, it means inspiration, it means possibility, it means history!”

If Cheryl can know a past, one that includes and describes the vibrant life of black lesbian women in the film industry, then maybe she can have a sense of her future as a filmmaker, and the presence of black lesbians in film. Maybe we all can. 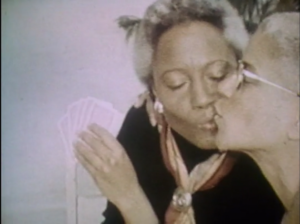 In the end, Fae’s story is a fictionalized one. But it represents the possible story of any number of black actresses that were (and somewhat, still are) cast for the restrictive roles being written for them. Dunye imagines Fae’s story by wading into the abyss of the erased history of black women, and even more so black lesbian women, in film.

Screens Friday, 6/21, at the Video Underground in Jamaica Plain at 8pm, doors open at 7:30. Don’t miss this great film!