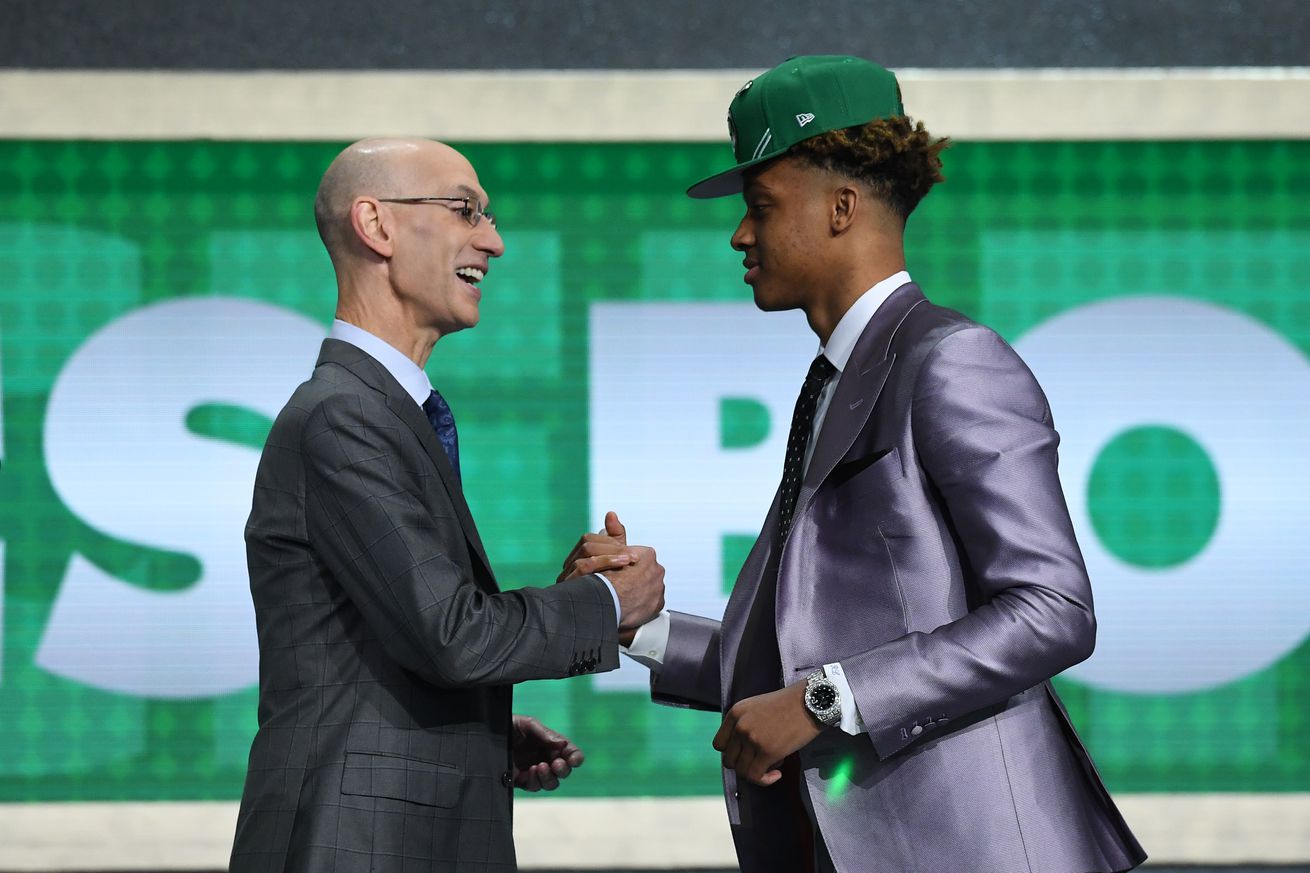 Taking a quick look at how the newest Celtics might be deployed.

I got really down on the Celtics over the last few days in the lead up to the 2019 NBA Draft. All indications were the team’s two best players are out the door, years of meticulous team-building left in shambles. And the future guaranteed nothing but difficult questions: what will the Celtics do with Terry Rozier’s restricted free agency? How will the team handle Jaylen Brown’s impending extension eligibility? Will Gordon Hayward ever be more than an albatross on the cap table?

For a night, the Celtics’ long-term questions mercifully faded into the background.

In my primer piece with overarching thoughts on the 2019 NBA Draft, I referred to the class as very flat. It was very much an eye-of-the-beholder draft, which created an opportunity. The smart teams–the teams more capable of distinguishing between the diamonds and the rough–had a shot at getting talent on par with anyone not named Zion virtually anywhere in the Draft:

I’ve said before that smart teams will have an inordinately large competitive advantage in this draft. A lot of potential to do really well with 3-4 picks

The Celtics are a smart team.

With the 14th, 22nd, and 33rd picks, the Celtics drafted the 12th, 4th, and 32nd players on my big board (and acquired a future first). As I mentioned in the primer, this class is low on realistic superstar outcomes. I don’t think the Celtics are set now with all the star talent they need in place, but Thursday night was a huge step. In Romeo Langford, Grant Williams, and Carsen Edwards, the Celtics have added a special haul to the core of Jayson Tatum, Marcus Smart, and Jaylen Brown. Let’s take a look at how the newest Celtics can apply their skills in the NBA.

Langford was the 12th-ranked prospect on my board. You can read here why I’ve remained in on Langford in a vacuum despite his star falling throughout the year. With the Celtics, I expect Langford to be used similarly to how the team enables Jayson Tatum’s on-ball scoring.

One of the key ways the Celtics get Tatum the ball is in these chest series:

Again, offense wasn’t the problem. Another good look out of the Chest series they run for Tatum often pic.twitter.com/X3wXUCRAOZ

In these sets, Tatum gets the ball in his hands on the perimeter, usually with some space to either launch a jumper or initiate a drive to the rim. Major issues for Tatum on these plays designed to get him the ball with a slight advantage can be his tendency to stop the ball off-the-catch and preference to move side-to-side as a dribbler rather than downhill:

Picked the wrong game to cheer me up pic.twitter.com/ObJYq4YleC

Langford should have no such issues:

With exquisite off-the-catch footwork, Langford can explode downhill, which allows him to get to the rim to unleash his elite finishing (87th percentile finishing at the rim in the half court). Langford won’t be Tatum as an isolation scorer, and I’m not positive how well his pick-and-roll scoring prowess (90th percentile) will translate because of that either:

Going through Romeo’s PnR clips and I noticed some things. 2 sample notes: can’t turn corner and heavily reliant on footwork (general observation, too) & not a fan of decisionmaking

Awesome def from Teske. Romeo drove instead of kicking to corner after dribble: lack of feel. pic.twitter.com/pN4Cp9h8mz

But Langford should thrive in the sets in which Tatum works as a playmaker and scorer off-the-catch.

Give me a second. I’m still processing it. Grant Williams is actually on the Celtics.

Williams was my fourth-ranked prospect in the Draft. Read my in-depth thoughts behind the ranking here, but the basic motivation behind my love for the Celtics’ new forward is a combination of genuine basketball genius, hyper elite strength, and elite touch.

As a pick-and-roll big, Williams should thrive in a role similar to Horford’s:

Throw this in there too. Every big should be watching film on how Al Horford operates on the short roll. pic.twitter.com/lcuzWx9sKU

As an elite decision-maker, Horford picked teams apart on the short roll, executing the right pass every single time. Williams is similarly elite:

The screen. The pass. The board. GRANT in 10 seconds. pic.twitter.com/020WBwEjwo

With his bone-crushing screens and overwhelming intelligence, Williams will destroy teams as a short roll passer. Like Horford, Williams has an elite mid-range game, so if a pass isn’t there, he can stop at the free throw line and launch an extremely high-percentage look.

For the last three years, Horford’s post game has been an invaluable safety valve for the Celtics’ offense:

Williams was an elite post scorer in college (97th percentile this year). He uses size, agility, and footwork to create space for his jumper and muscle his way to the rim:

But the real value of Horford’s post game stemmed from the Celtics’ ability to generate team offense from it, an area in which Williams excels:

As a brilliant passer and potent finisher, Williams should contribute some of the decision-making and go-to scoring in the front court the Celtics cherished from Horford.

To get Williams into the advantage situations in which he’ll wreck, the Celtics need a pick-and-roll ball-handler whose on-ball scoring threat will force defensive compromises to contain him. Edwards could be that player:

In his junior season, Edwards played an insane role on a creation-starved Purdue team. He was encouraged to shoot. A lot. And a lot of super difficult attempts. Despite all that, despite taking a staggering 237 off-the-dribble jumpers in the half court, he finished in the 71st percentile in efficiency on those shots.

The threat of Edwards’ pull-up is real. It warps defenses. Whether Edwards has the passing acumen to capitalize on that is another question, but players like Williams and Tatum should ease that burden: come off a ball-screen, draw two defenders, get it to smart forwards, and let them eviscerate advantage situations:

Carsen Edwards isn’t an elite passer but I generally think he’s pretty solid and that part of his game isn’t some glaring negative. This is a nice feed here: pic.twitter.com/jz8z5dngrv

Edwards is far from the passer or finisher at the rim recent star Celtics lead guards have been, but the decision-makers the Celtics have around him should help to insulate those flaws.

As I circle back on the film of the latest additions to the team and revisit some of those wretched 2018-19 Celtics games, I’ll have more thoughts on how to apply the new guys. From the jump, though, there are clear applications within the team’s existing offensive structure for each of the team’s top-3 selections.

None of these guys is a complete game-breaker. The Celtics didn’t draft a Kyrie Irving replacement or the best player on the team that raises Banner 18. But that doesn’t have to matter for a night. The Celtics drafted three incredibly good players (51st pick Tremont Waters is no slouch either). For now, let’s forget the questions and enjoy that.