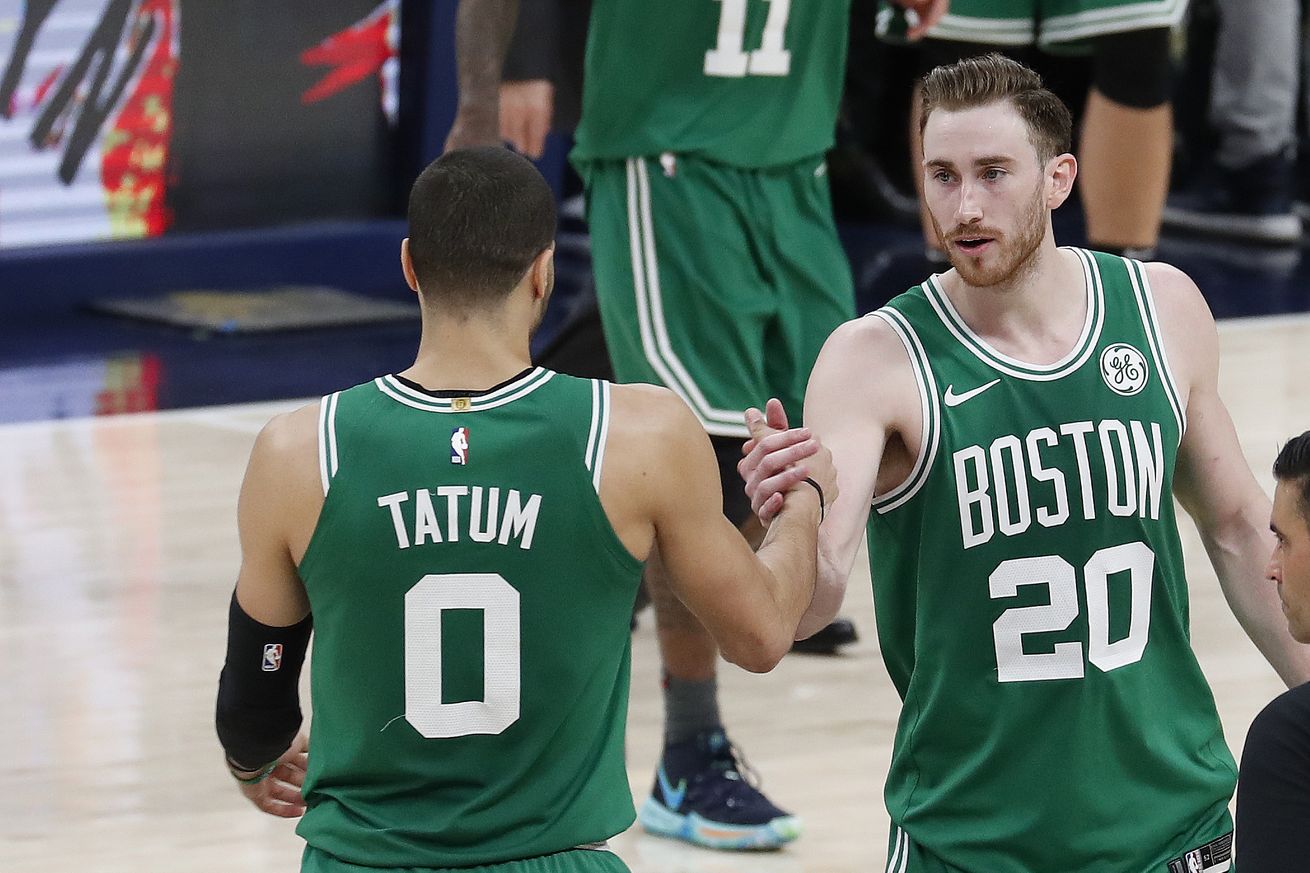 The Celtics have too many forwards on the roster and two All-Stars on their way out. How likely is a Hayward trade to fill out the other positions?

We’ve now entered my least favorite part of the NBA calendar: fake trade season. If your fake trade has crossed my eyeballs recently, chances are good that I rolled them and kept scrolling. In fact, if you post one more trade machine screenshot about a Terry Rozier sign-and-trade with picks for an All-Star…I digress.

The part of the off-season that I do enjoy is taking stock in Boston’s potential trade pieces and seeing what other teams have to offer. Is it wise to value Jayson Tatum so highly? What kind of offers do we expect Marcus Morris to get? Is it reasonable to think a team would take on Gordon Hayward’s salary in exchange for star talent?

There’s always a deal to be made

Matching salaries is always a challenge with trades, and it’s even more difficult for a roster mostly comprised of cheap contracts and a couple max deals (or less if Al Horford leaves). Hayward’s $30 million is steep, but not impossible to move. I say this with absolute sincerity: no contract is impossible to trade. Timofey Mosgov signed a four-year, $84 million deal in 2016 and has been traded three times since then. Three! Ryan Anderson got a four-year, $80 million deal of his own and was moved halfway through it. There’s not much precedent for a Hayward-level deal (over $60 million left over two years, player option) to get dumped, but if the Oklahoma City Thunder can get off the Stevens Adams contract ($53 million over the next two years), we could have a better sense of what it could take to get off Hayward’s.

Just about any contract has some utility, so you could probably trade a ham sandwich on the last year of a max deal because a team could use the cap space it opens up if nothing else. Gordon Hayward is worth at least seven ham sandwiches, so don’t be so sure that he’s untradeable. I’m not sure the Celtics could sell him as a star talent, but a salary dump with upside is a unique offer that could draw some interest. Danny Ainge has said multiple times that Hayward has been busy in the Auerbach Center since the start of the summer and that he expects big things from him next season. We just don’t know in what jersey.

Adding (or keeping) Hayward allows for timelines to be flexible. If he returns to All-Star form, then that’s great! He’s got an opt-in clause that he would likely pick up in the right situation. If things don’t work out, then you’re looking at him as a salary dump. Again, I’m not sure how the Celtics feel about that uncertainty, but I think most rebuilding teams can afford to take a chance on him if the money works.

Personally, I’m all in on a Gordon Hayward revenge tour next season. He’s internalized all the doubt, grinded to the legend rank in Hearthstone, and is taking advantage of having a full summer to prepare for next season.

Any scheme to swindle the Pelicans out of Anthony Davis is off the table now that they’ve made a mega-deal with the Lakers. Memphis is no longer an option with Mike Conley headed to Utah. While there are some teams that could theoretically rebuild around him, it’s important to recognize which teams are honest about where they stand in the NBA world.

Not every bad team is rebuilding. In fact, some bad teams are bad because they either refuse to rebuild at all, or started too late. In 2016, the Bulls signed Dwyane Wade and Rajon Rondo in one last attempt to win with Jimmy Butler. The following summer, they traded him to Minnesota with one less year on his contract for Zach Lavine, Kris Dunn, and the seventh pick (Lauri Markannen).

All I’m saying is this: teams that punt on assets and make anti-rebuild decisions during rebuilds make for some pretty tough trade machine partners. How could we be so sure that the Bulls were committed to a rebuild if they parted with Jordan Bell for cash so easily?

On the flip side, teams like Phoenix might take on players like Aron Baynes to help Boston open up more cap space to make more moves, possibly alleviating some of the pressure to make a move with Hayward. Phoenix also gave TJ Warren to Indiana for cash on Draft Night, once again reinforcing the idea that not every rebuilding team is aware that they’re rebuilding.

I bring up small transactions like these because I think they’re the best way to get a read on what each team thinks their timeline is, which admittedly feels like I’m just running myself in circles trying to make sense out of anything Phoenix or Chicago does.

That kind of front office buffoonery, among other reasons, is why I’m not getting my hopes up for a Bradley Beal trade. Beal is the perfect fit in Boston when you consider they haven’t had a “pure” shooting guard since the Avery Bradley trade. (I don’t think “pure” anything exists now that all guards might as well be combo guards, but my point still stands.) Ainge didn’t put Boston’s best young asset – Jayson Tatum – on the table for Anthony Davis, which might as well mean he’s not on the table for anybody.

Washington traded Otto Porter to Chicago for Jabari Parker’s expiring $20 million, Bobby Portis, and a 2023 second-rounder. Porter was halfway through his four year, $106 million deal, making this some pretty heavy cap relief for a financially encumbered Wizards team. They declined Parker’s second year (also worth $20 million), but they’re still pressed for cap space. If the recently super-maxed John Wall misses most of next season to injury, then you’re leaning on just one more season in 2020-21 with both Wall and Beal under contract. There are no other Wizards signed through that year other than Troy Brown (team option). So, depending on who the Wizards commit to in the upcoming season, they could be looking at a pretty clean slate in 2020. Here’s what the payroll looks like right now, via Basketball Reference:

Hayward makes $32 million next year and $34 million the next. Even at his best, I don’t think a Hayward resurgence changes Washington’s timeline. With Hayward and Beal on similar deals, it doesn’t change much for the Wiz. Even if they can work out a deal to send Mahinmi’s contract to Boston, what does that allow for them in the short term? We could pretend they have unlimited cap space to sign one player and still have trouble finding a prominent free agent to buy into both Wall and Hayward playing like their best selves within a couple years.

Perhaps the previously mentioned Steven Adams contract is the only way to get a deal done. Boston’s front court is running thin and Oklahoma City could certainly use another shooter for Westbrook to pass to. Adams is set to make $25 million next season, leaving a relatively small $7 million gap between his salary and Hayward’s. It’s a steep price to pay for either player, but if each team can fulfill a positional need through a trade, why not pull the trigger? Adams and other rim-running centers are known to shrink in the playoffs, but Boston’s future is at the forward position. Losing Horford’s passing hurts, but adding a rebounder is a reasonable consolation given the circumstances.

If you don’t think any of these trade scenarios sound enticing, I wouldn’t blame you. Losing both Irving and Horford in the same off-season means we’re giving up some talent that won’t be replaced in full. The Celtics have made some moves to clear up more cap space, leaving the door wide open for just about anything from signing veterans to fill out a bench, to D’Angelo Russell fortifying the starting lineup. You’re probably tired of hearing it, but we need to wait for some of these things to shake out before we freak out over free agency. Remember, we waited two years to see who we’d get with the extra pick from the Tatum/Fultz swap, and we’ll be waiting even longer to see who Philadelphia takes with the picks they got for Fultz.

If teams were dying to take a chance on Hayward, I think we would have heard about it by now. My prediction is that Boston keeps him and leaves it to Stevens to juggle his minutes with Brown, Tatum, Ojeleye, and the newly drafted Grant Williams.