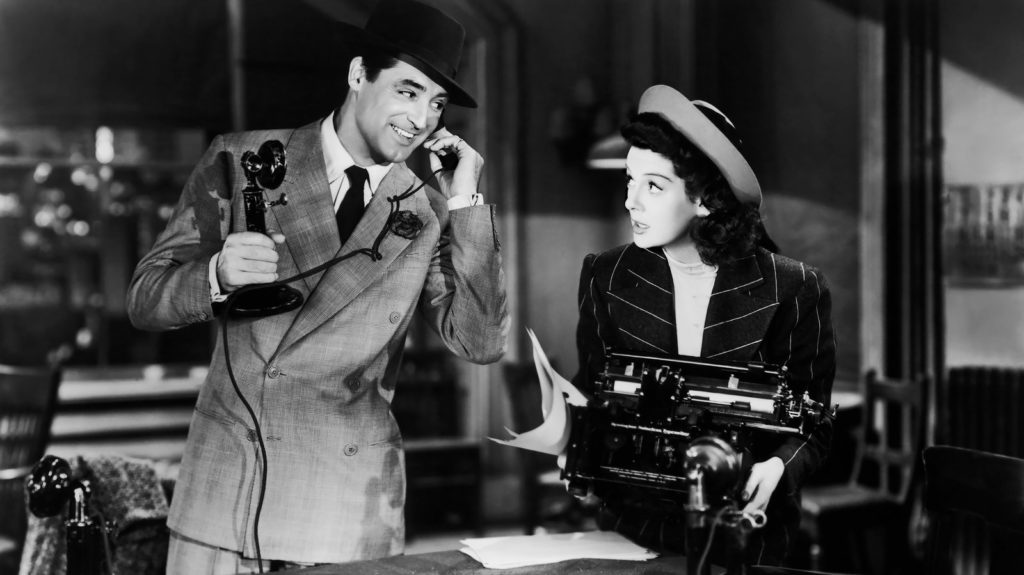 Around this time last year, I crafted something of a private ritual that I came to call “Screwball Saturdays.” Each Saturday morning, while my girlfriend was at yoga, I would pour myself a bowl of cereal, fire up my Filmstruck queue (R.I.P.), and slowly make my way through the canon of classic screwball comedies. The screwball, for the unaware, is a very particular strain of escapist Hollywood comedy which came into vogue during the Great Depression. Roughly speaking, screwballs are an ancestor of the modern romantic comedy, but with less reverence for traditional “romance.” While the parameters are loose, key characteristics include strong, eccentric female leads; men who are alternately lovable rogues or endearing neurotics; outlandishly contrived slapstick situations; and, most distinctly, clipped, rapid-fire banter. Morning by morning, I made my way through such breezy staples of the genre as Bringing Up Baby, It Happened One Night, The Philadelphia Story, and more tales of madcap high-society hijinks.

Finally, I made my way to one of the jewels in the screwball crown: Howard Hawks’ 1940 newsroom classic His Girl Friday. I had seen Friday many years ago in college, and remembered it as a witty, fast-paced remarriage comedy pairing Cary Grant with Rosalind Russell. And, to be sure, it is that. But upon rewatching it, I was struck by how much else it had on its mind: unlike most screwball comedies, which deal in pure, fluffy escapism, Friday offers surprisingly biting commentary on corruption in politics, as well as a strikingly forward-thinking portrayal of an ambitious career woman.

Russell stars as Hildy Johnson, an award-winning journalist who marches into the office of her ex-husband and -editor, Walter Burns (Grant), to announce her pending engagement and retirement. Walter, meanwhile, sees an opportunity to win back both his wife and his star reporter (not necessarily in that order), and arranges an elaborate ruse to rope Hildy into covering one last story, that of wrongly accused cop-killer Earl Williams (John Qualen). Hildy takes the bait (not that she needs a whole lot of convincing), and soon dedicates herself to exonerating Williams, both by penning her magnum opus and, through a zany set of circumstances, physically breaking him out of jail. 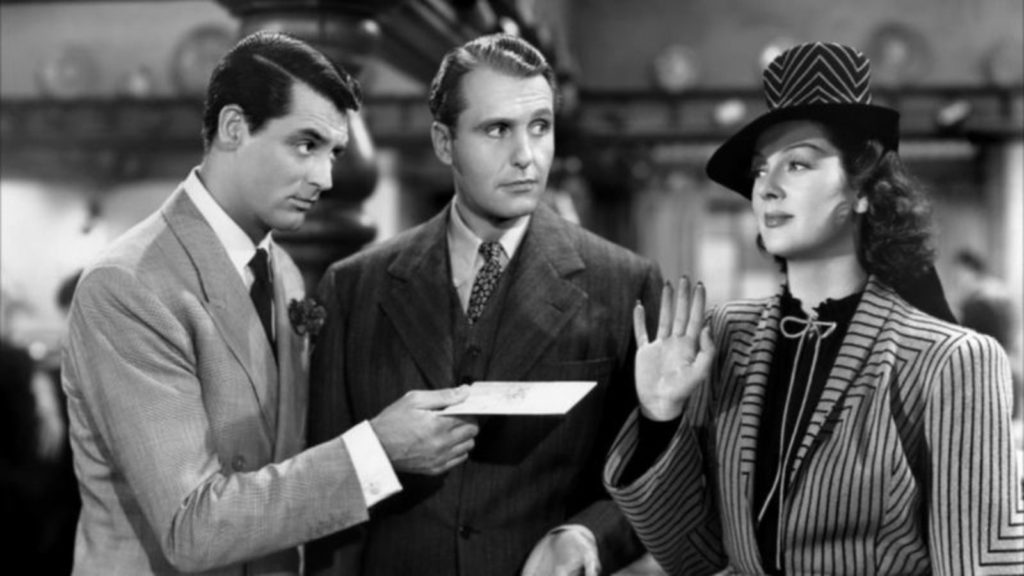 Again, in many ways, Friday is a prime example of the screwball genre: the wordplay is blisteringly fast, Grant and Russell are at their peaks, and the physical comedy set pieces are dizzying. Yet the phrase “wrongly accused cop-killer” is not one that comes up often in the madcap world of screwball comedy, and few end with their protagonists righteously taking down a corrupt mayor and police force. I’m sure there are historians who are more equipped than myself to unpack the film’s politics (I should add that the case against Williams contains a racial element that has aged bizarrely at best), but even to a layman this aspect of the film is both fascinating and exhilarating.

Then there’s the matter of Hildy Johnson, rightly hailed as one of the all-time great female Hollywood protagonists. You don’t have to be a film historian to glean that Russell’s portrayal of a career woman who is not only revered and respected by the men in her field, but who ultimately rejects a life of domestic bliss with a dependable man in favor of the work that is her passion, is phenomenally unusual. Part of this, it should be noted, is thanks to Hawks’ decision to literally flip the script: in the film’s source material, Ben Hecht and Charles MacArthur’s stage play The Front Page, Hildy is a man, persuaded by his editor to leave his wife with no (overt) romantic intentions. By making Hildy a woman, Hawks opened the door to the romantic chemistry between Grant and Russell, but he also created a character who feels remarkably modern and progressive even today. Walter, of course, is trying to win back his ex-wife, but he’s also trying to recapture the best journalist he’s ever employed, male or female. It’s not for nothing that generations of writers have cited Hildy as a primary inspiration, just as lawyers might cite Atticus Finch.

So His Girl Friday is a screwball comedy, but it’s also a whole lot more. On one level, this serves as a sort of microcosm for Hawks’ approach. Of the first wave of Hollywood auteurs, Hawks (the subject of a career-spanning retrospective currently underway at the HFA) is undoubtedly one of the most genre-fluid, turning out stone-cold classics in the western, film noir, and even proto-body horror science fiction genres. His Girl Friday isn’t Hawks’ only contribution to the screwball pantheon, but it is perhaps his masterpiece, taking the genre to places it would rarely venture, before or since.