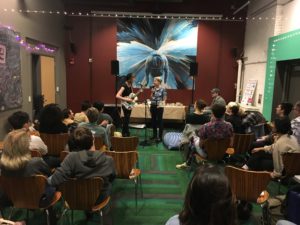 On weekday evenings, the bustling Financial District converts into a quiet spot in the city.

Cooling off from the day’s hustle of racing businesspeople, lawyers and bike couriers, the streets turn empty at dark.

But on the second Thursday nights of every month, an underground enclave gathers – unassumingly – in the lobby of HI Boston Hostel on Stuart Street.

Here, a welcoming open mic hosted by the local Bummer City Historical Society & Civic Engagement Coalition offers a stage to any and all who’d like to play one song. That kind of offering in a hoteling space primarily utilized by international travelers opens the cozy corner up to an amalgam of talent. On any given open mic night, Bostonians and tourists mix. A 16-year-old from Barcelona sits at the upright piano to play an emotional Romanian sonata, followed by the gentle guitar picking of a Somerville songwriter.

This distinctive show, led by Quincy’s James Chiyoki Ikeda, launched in 2015 and this month, on June 13, celebrated its four-year anniversary. The Bummer City group and its devoted followers celebrated with warm words and homemade cake. 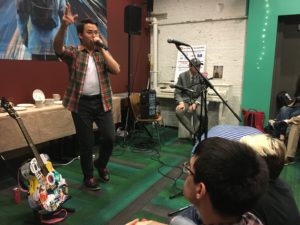 Bummer City Open Mics are structured to invite players for short sets, wrapping around a featured musical artist or spoken word act. A visual artist is also highlighted in the space, with that person’s work displayed around the room.

Donations are taken with the passing of a hat. The Bummer City Historical Society gives 25 percent to each of the featured artists, and donates the rest of the takings to a non-profit or cause of the artists’ choosing.

“We’ve raised about $7,000 in the last four years,” James said, noting that most of the time, the artists generously donate their share as well.

James, 29, a high school history teacher who also leads his musical project “The Michael Character,” first started the group with friends, based around the same concept used to run a Quincy house show from 2013 to 2015 called “Bane Voice.” In two years, the series featured approximately 80 acts.

When the “BV” get-togethers stopped happening – upon the accidental deletion of documentary footage on the project (a crushing blow to the group and filmmaker Lisa Greenberg) – Bummer City and its mission was born.

The group of about 15 or so Boston artists and community organizers started the open mic in 2015 out of that idea, and this month, at the 42nd event of the series, a milestone was hit for the crew. The society members pride themselves on running an event filled with both concentration and polite energy from the audience. 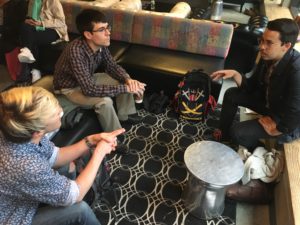 “You can cultivate the kind of space you want through modeling a combination of the behavior you want to see, and the environmental factors,” James said. “If you make a space that comes from a place of love and work, people will respect that.”

One of James’ leading collaborators in Bummer City is his friend Chris Comer, also 29, from Dorchester, who attended Boston University with James. Coincidentally, the two host events together and work at the same South Shore high school (unnamed by request to avoid stalking by their teenage students, they joke); Chris is a physics teacher there.

“[James] is the one who’s been driving this along the entire time,” Chris added, in an interview shortly before the anniversary night rolled out.

About 30 people attended, par for the course for the indie operation, James said. The event kicks off now with a traditional singing of the Stan Rogers song Barrett’s Privateers; handmade paper signs with lyrics are hoisted dramatically above the crowd to inspire an audience singalong. 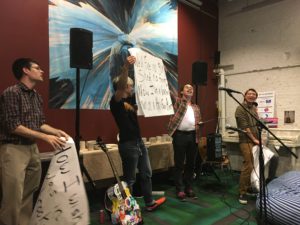 June 13 featured the ceramic works of Elizabeth Song (@esongceramics) and a performance by Katytarika Bartel, who also was the featured visual artist in May. The two selected the cause of the night to be the Queer Asian Pacific-Islander Alliance of New England. The room beamed with excitement and celebration as local artists, musicians and onlookers revelled in the success of the ongoing series.

Bummer City hosts other events around the city, including a Winter Gala in December, which last year was held at The Lilypad in Inman Square in Cambridge, as well as the Bummer City Billiard Club at Flat Top Johnny’s in Kendall Square. James explained the billiards event is “for people who suck at pool, but who want to systematically improve their skills so they can be really good at pool.”

The Civic Engagement Coalition side of the community-minded activists also works to make voting guides ahead of each election, to assist in the registration of voters, and, according to the group, attempts to offer resources and opportunities for civic education and engagement in local politics.

Their target audience is “particularly people who are generally not very engaged,” James said. 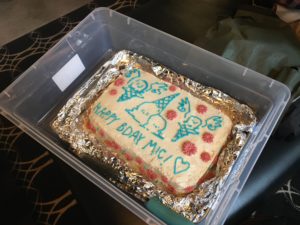 Four-year birthday cake for the anniversary night, baked by Milner.

The next Bummer City Open Mic iteration will be held July 11 (open mics are hosted the second Thursday of every month) with featured artists to be determined; doors and sign up are at 7 p.m. with performances starting at 7:30 p.m. For more information, or to get involved, email [email protected] or visit www.bummercityhistoricalsociety.com.

Samantha Hartsel is a freelance writer, photographer and musician.

She is currently the frontwoman of the Dorchester rock band Tysk Tysk Task. Reach her directly @delicatetendril, [email protected].